The appointment of Prince Muqrin to deputy crown prince has reportedly angered some of the grandchildren of the kingdom’s founder. 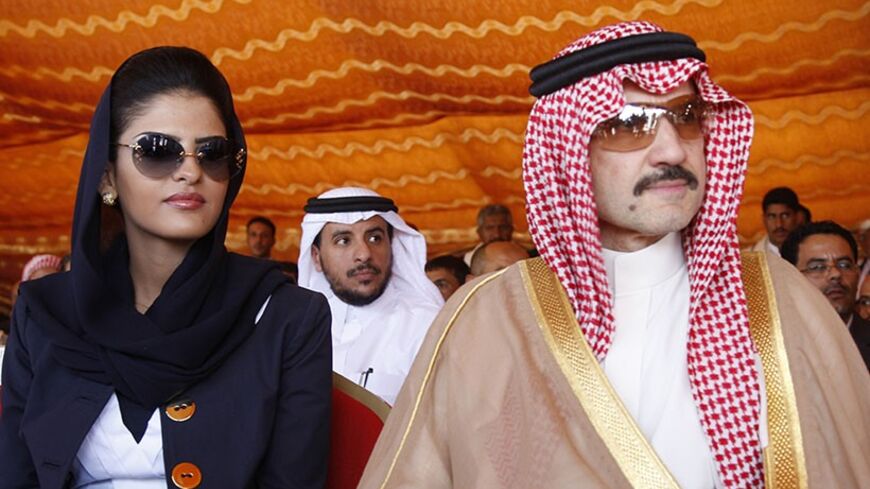 Saudi Prince al-Waleed bin Talal (R) and his wife Princess Amira al-Taweel attend a ceremony for the opening of housing units in the al-Dhafir village, west of Sanaa, May 24, 2009. - REUTERS/Khaled Abdullah

The appointment of Prince Muqrin bin Abdulaziz in late March has reignited a generational rift within the Saudi royal family, with some grandchildren of the kingdom’s founder, Abdulaziz al-Saud, fearing they will miss out on taking up leadership positions.

A few royal grandchildren have specifically targeted President of the Royal Court Khaled al-Tuwaijri via social media, accusing him of suspicious and corrupt goals.

Since Muqrin’s appointment, Saudis have begun to increasingly follow the social media accounts of some of these royal grandchildren. They began to boldly express, in an unprecedented way, their opposition to Muqrin’s appointment as second-in-line to the crown prince. They were not content with merely announcing their anger outside of the councils and meetings of the royal family, but went as far as to politically target Tuwaijri and accuse him of corruption, conspiracy and exploiting his post.

Prince Khaled bin Talal was the first to launch an attack on Twitter against Tuwaijri, although without explicitly naming him, tweeting, "The "Supreme Leader" (referring to Tuwaijri) has opened his own Court on Twitter …!! Instead of the Royal Court..!! In compensation for the affairs of citizens that had disrupted and accumulated all these years." Then another grandson, Prince Saud bin Saif al-Nasr targeted Tuwaijri openly, directly accusing him of corruption over a series of tweets.

The first signs of this dispute within the ruling family, though limited, appeared in 2006 with the televised announcement by the late Prince Nayef bin Abdulaziz of the king’s decision to form the Allegiance Council (Hai’at al-Baiya) at the end of Ramadan in 2006, which was described as having only an advisory and not an obligatory role.

Some voices within the royal family feared that the Allegiance Council may hinder the arrival of Nayef to the crown prince post or that it may affect the horizontal hierarchy to become crown prince, according to family customs. But when Nayef was officially appointed crown prince in 2011, those fears subsided, except for Talal’s position, which was the most prominent rejection of that appointment.

Nayef's death in 2012 contributed to the resumption of differences within the ruling family. The sons of Saudi Arabia’s founder Abdulaziz al-Saud, who were passed over by Nayef being chosen as crown prince and who aspire to reach the throne, thought that the time had come to implement a succession plan based on hierarchy of age — eldest to youngest. They consulted within the Allegiance Council rather than relying on an individual decision or that of a small group within the family. Some of the older sons are also displeased that Prince Muqrin has seemingly jumped the queue of his older brothers.

Prince Talal bin Abdulaziz tweeted on April 30, "Today I received a letter of thanks from HH Prince Muqrin bin Abdulaziz, in which he referred to me congratulating him on his appointment as deputy crown prince. And as I never congratulated him or any other [person], it must be noted that my position is to maintain distance from the overstepping that leads to a firm group, as announced on Jan. 23, 2012, and I will not change it."

The outburst against Tuwaijri did not happen suddenly. It was an old feeling that finally burst after a series of crises as a result of the absence of an explicit and clear constitutional mechanism and specific provisions governing the transition of power.

Differences were resolved by strong prominent figures within the family such as Sultan, Nayef and Salman. Their presence prevented the crisis from growing, and they resolved it within the family. But eight years after the first attempt by King Abdullah bin Abdulaziz to institutionalize the system of governance through establishing the Allegiance Council, which includes sons and grandsons of the kingdom’s founder, differences remain. The influential names have either died or become involved in the crisis, thus opening the door for the grandchildren, who have declared their positions via social media, to intervene. The targeting of Tuwaijri’s role opened the door to discuss the details of the growing anger within the house of Al-Saud.

Saudi observers know that the accusations by some princes against Tuwaijri will not limit his influence or impede his administration or orientations, which have won the king’s trust. Through that trust, his authority has reached all state facilities. That, of course, has raised the ire of some princes who have become accustomed to the previous decades when they could get all they wanted without internal accountability or interference from outside the family. Many Saudis, especially the participants and observers on social media, have become convinced that some princes are angry with Tuwaijri, not in the interest of the people or nation — as is being portrayed — but because he is an outsider of the royal family who has reached powerful heights.

Since the naming of the first president of the Saudi Royal Court in the mid-1920s, the president of the court managed the specifics of the affairs of the king's office and implemented his decisions and followed up on them. The royal children and grandchildren have been used to the traditional image of this post for more than eight decades. But in 2005, King Abdullah appointed as head of the court one of the sons of his adviser and colleague, the historian and writer Abdulaziz al-Tuwaijri. Khaled al-Tuwaijri bin Abdulaziz — because of his intelligence and his legal, political and family backgrounds — succeeded in winning the king’s confidence, without limits, and went beyond his job, from implementing the king’s decisions to participating in forming them.

And so the real reason why some princes are hostile to Tuwaijri is because he has exceeded his limits as a citizen who does not belong to the royal family. He has reportedly become a decision-maker in several issues concerning the state and the ruling family, the most prominent and serious of which is to appoint Muqrin as second in line to Crown Prince Salman. Salman suffers from health problems, meaning Muqrin will likely become crown prince in the near future, and then king.

In contrast, most of the princes preferred to remain silent and submit to the inevitable, to contain the dispute within the royal family. Others protested via statements made by other princes, religious and tribal figures and remained silent regarding their opposition.

The king appointing Muqrin, the founder’s youngest living son, by a decision that cannot be amended, changed or reinterpreted aims to ensure that future arrangements in the Saudi regime are implemented. Until now, no one appears to have the capacity or legitimacy to sabotage or influence that decision. All the currently available indicators show that, if there are no surprises, Tuwaijri will continue to be the supreme guide overseeing the implementation of those arrangements and transitioning the rule from horizontal to vertical heredity.