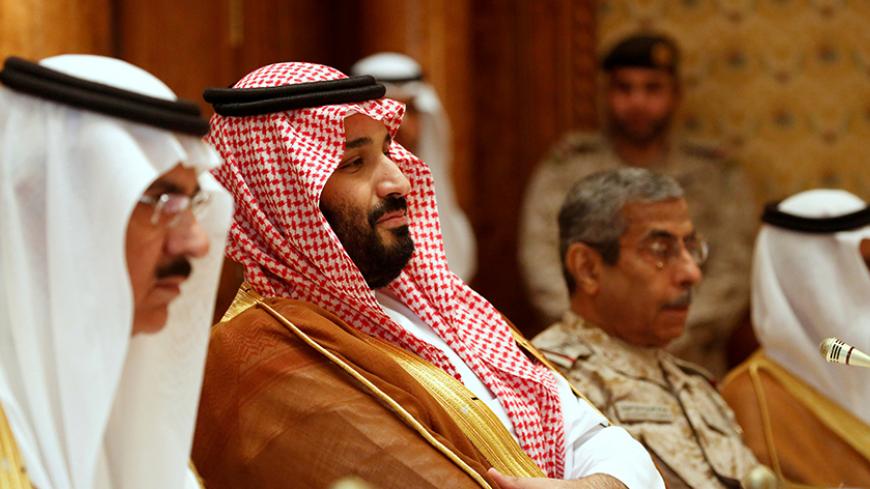 On June 21, Iranians woke up to the news that Mohammed bin Salman, a man notorious in Tehran for his anti-Iran remarks, had been appointed crown prince of Saudi Arabia, replacing Mohammed bin Nayef.

Since King Salman bin Abdul-Aziz Al Saud ascended to the throne, Iran and Saudi Arabia’s relationship has deteriorated, and many in Iran see the new crown prince — the king's son — as the architect of Saudi Arabia’s offense-minded foreign policy in recent years. This policy has included unanticipated moves such as the war on Yemen and siege on Qatar.

Mentioning Salman and his son, Iranian Supreme Leader Ayatollah Ali Khamenei said April 19, 2015, “We always said the Saudis behave with tactfulness and seriousness in their foreign affairs. But they have lost this tactfulness and seriousness. A few inexperienced young people have taken the affairs of that country into their hands and they prefer savagery to tact and maintaining appearances. This will be to their disadvantage.”

Iranian elites do not hold a very positive view of the branch of the House of Saud currently in power in Saudi Arabia, and the new crown prince in particular, who is known in Iran for his statement in early May, “We will work so that the battle is on their side, inside Iran.”

Much of the Iranian media has described the promotion of Mohammed bin Salman as a coup within the House of Saud. Under the headline “A soft coup in Saudi Arabia; bin Salman’s dream fulfilled,” the conservative Mehr News Agency wrote June 21: “Whispers of a power struggle in the House of Saud have long been heard, a struggle ongoing between Crown Prince Mohammed bin Nayef and Mohammed bin Salman. Since Saudi King Salman bin Abdul-Aziz is aging and suffers from various illnesses, including Alzheimer’s, it is therefore natural that the power-thirsty Saudi princes fight each other to take over the kingdom’s throne after King Salman’s [death].”

Tasnim News Agency said June 21, “All the actions of the king of Saudi Arabia to bring his son to power were pre-planned, but this was taking place gradually and slowly so that they would not face any opposition within the Saudi court.” The conservative news agency said that since Mohammed bin Salman did not have the necessary experience to run the country, his father granted him extensive authority so that he could portray himself as a powerful figure both at home and abroad.

Noting the declining power of Mohammed bin Nayef due to the king's recent decrees, Tasnim said, “The recent crisis between Saudi Arabia and Qatar revealed the disagreements inside the ruling dynasty more than in the past. Mohammed bin Nayef remained silent about the recent developments, and it has been said that he had a good and strong relationship with the Qatari emir, and some of the political observers believe this issue was one of the reasons for his removal.”

ISNA pointed the finger at US President Donald Trump as the man who helped the young prince rise to power. “Every Saudi prince needs three power levers to become king: America, the Saudi royal family and the people of Saudi Arabia. It seems that the first two levers overcame the third. Preparing the ground [for his ascent], Mohammed bin Salman passed the first two obstacles easily. Recently, a document was leaked that disclosed that bin Salman and Donald Trump had reached a deal with each other during his presidential campaign over [bin Salman's] ascending to the throne. … This morning, when King Salman made this surprising decision, we could see that Trump had shown his green light,” ISNA wrote June 21.

A brief look at analyses published in Reformist and conservative media in Iran indicates that there is general unhappiness with the new developments in Saudi Arabia, and a belief — based on the background of the new crown prince — that the tensions between Tehran and Riyadh will be heightened, along with the clashes in the region.

Khabar Online wrote June 21, “Bin Salman’s strategy in the region relies on Washington and Tel Aviv. What is worrying in this time period is what this young hawkish prince, along with the young Saudi foreign minister, have been planning for the Middle East. Is there another war on the way?”

Moreover, the conservative Mehr news agency said June 21, “The appointment of Mohammed bin Salman as crown prince of Saudi Arabia shows that from now on, we can’t expect a drop in the radical actions of the Saudi [royal] family in the region. Mohammed bin Salman is an extremist, arrogant, adventurous and hawkish prince who will undoubtedly take a new path to fulfill expansionist goals in the region.”

Noting the new crown prince's remarks about “taking the battle to Iran,” the moderate Entekhab news site wrote June 21, “From now on, we should not be surprised if we see the Saudi Foreign Ministry taking a more radical approach regarding regional issues, and especially Iran. But if the question here is that of whether the challenges will lead to a direct clash with Iran or not, [we should say] that it is very unlikely, as Saudi Arabia knows very well that despite its buying many weapons, it doesn't have a proficient military and human capital. … Saudi Arabia will try to provoke Iran; provocations that would persuade Iran to carry out pre-emptive action … but [given] the astuteness the Islamic Republic has shown in recent years, it is unlikely that it [would be deceived into playing a role] in the pre-planned scenario of a young 32-year-old Saudi.”