Saudi Arabia's deputy crown prince is quickly accumulating power, responsibility — and risks — perhaps at the expense of his cousin, who is currently next in line for the throne. 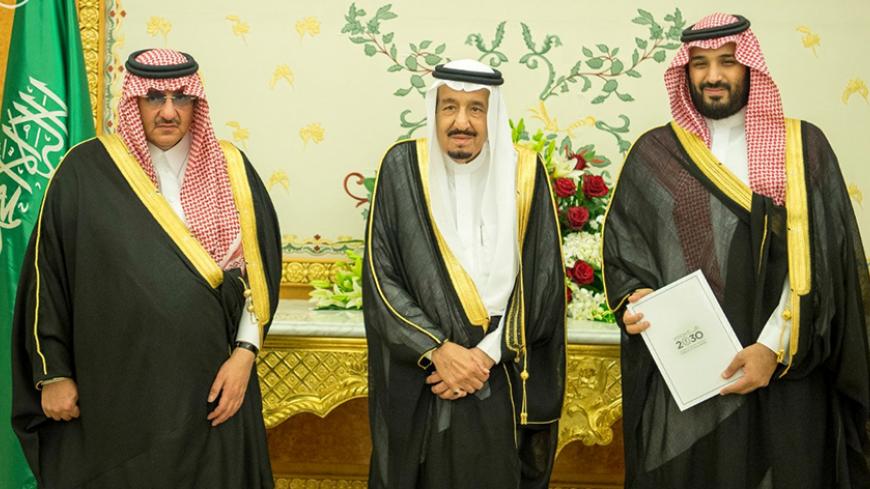 It is common for Saudi kings to regularly hire and fire senior bureaucrats. However, the latest Cabinet reshuffle reflects something profound and ambitious that has dominated Saudi Arabia since King Salman bin Abdul-Aziz Al Saud ascended the throne in January 2015: the rise of his son, Deputy Crown Prince Mohammed bin Salman, to the highest echelons of politics and economics in the realm.

The king's May 7 orders for a major shakeup embody his son's Saudi Vision 2030, orchestrated by a global consulting firm to "end Saudi addiction to oil." At no other time in the short history of the deputy crown prince position (the post was invented by the previous ruler, now-deceased King Abdullah) has a prince been entrusted with so many powers and initiatives so quickly. The young deputy crown prince has enjoyed his new powers and has definitely overtaken his cousin, Crown Prince Mohammed bin Nayef. Deputy Crown Prince Mohammed now controls defense and meddles in both oil and social engineering.

While the Cabinet reshuffle was meant to end Saudi addiction to oil, it led to ending the career of Minister of Petroleum and Mineral Resources Ali al-Naimi, after he spent 20 years in charge of one of Saudi Arabia's most important resources. In addition to his age — he reached 80 last year — Naimi's fall is perhaps related to his inability to orchestrate an agreement at the Doha meeting in April to freeze oil production with Iran's compliance. Prince Mohammed insisted that Saudi Arabia will not freeze production unless Iran does so.

Since becoming oil minister, Naimi had protected oil from the political whims of the princes. Oil was used as a weapon only once, during the 1973 oil embargo. Oil-producing Arab countries reaped the benefit of quadrupling prices after the embargo in response to US support for Israel during the war with Egypt that year.

Since then, the market and not the princes have determined the price of oil. This dynamic has protected the Saudi oil sector and made Aramco, the state's oil company, a relatively efficient enclave against the background of other decaying and slow state bureaucracies. The newly appointed oil minister, Khalid al-Falih, is an Aramco executive whose challenge will be to handle Deputy Crown Prince Mohammed's politics and interference in oil.

The recent Cabinet reshuffle also replaced the ministers in charge of water, transport, commerce, health and social affairs, after renaming the posts to correspond to Deputy Crown Prince Mohammed’s Vision 2030. In addition to the promotion of commoner bureaucrats to these posts, the royal decree also included the appointment of two princes as advisers to the royal court. The total exclusion of capable choices from other Saudi regions did not go unnoticed on social media. Novelist Ahmad Abu Daham, who is from the southwest region of Asir, commented on Twitter that "people in the central province are congratulating each other while we in south, north, east and west are unsuccessful."

While politicizing oil and excluding other regions from high posts may prove controversial, Deputy Crown Prince Mohammed bin Salman is also determined to orchestrate top-down social change, thus trespassing on Crown Prince Mohammed bin Nayef and his Ministry of Interior's historical monopoly over all matters related to national security, as well as religious, judicial and social affairs, not to mention repression and detentions. Deputy Crown Prince Mohammed's drive to diversify the economy includes opening the kingdom to tourism, a controversial move that is bound to irritate the social conservatives who had only just accepted some religious tourism as legitimate and worth encouraging.

Such conservatives, especially members of the Committee for the Propagation of Virtue and Prohibition of Vice (known as the religious police) are on the Interior Ministry's payroll. Recently they reluctantly accepted a royal order that stunted their authority. Deputy Crown Prince Mohammed wants to counter the religious committee with a new Committee for Entertainment, headed by business school graduate Ahmad al-Khatib. While actors and artists welcomed the move, the decisions generated skeptical and critical comments on social media. Top-down fun is bound to raise cynicism and laughter.

It remains to be seen whether Deputy Crown Prince Mohammed's eclectic vision, which has been honored by his father in the latest shuffle, will eventually lead to successful transitions in the long term. In the short term, it resembles a "phantasmagoria," articulated by outside consultants insensitive to local cultures, structural constraints and domestic power struggles and balances within the kingdom. So far, the predictions are gloomy, with some commentators expecting Saudi Arabia to become "structurally insolvent" because of its ever-rising expenditures in the face of cheap oil.

Notwithstanding the economic challenges, the orchestrated rise of Deputy Crown Prince Mohammed at the expense of other senior princes has the potential to be explosive. If he succeeds, he will silence doubters within the palace. As long as his father is the supreme commander, it is difficult to challenge the deputy crown prince, especially at a critical economic downturn. But if the son fails and his father is not around to protect him, he will face a brewing crisis not only from above but also from below. It is not so easy to rehabilitate and re-educate a population that has gotten used to a nanny state.

Weaning Saudis off state welfare will be the most critical challenge the young deputy crown prince will face over the coming years. If loyalty cannot be bought with oil, Deputy Crown Prince Mohammed will have to rethink his economic reforms and perhaps seriously consider alternatives — such as giving Saudis real stakes in the kingdom, an elected national assembly, for example. Saudis, too, may have visions of their own.