The constant reshuffling of princes among key Saudi ministries demonstrates the lack of a clear plan of succession to the Saudi throne, Madawi Al-Rasheed writes. 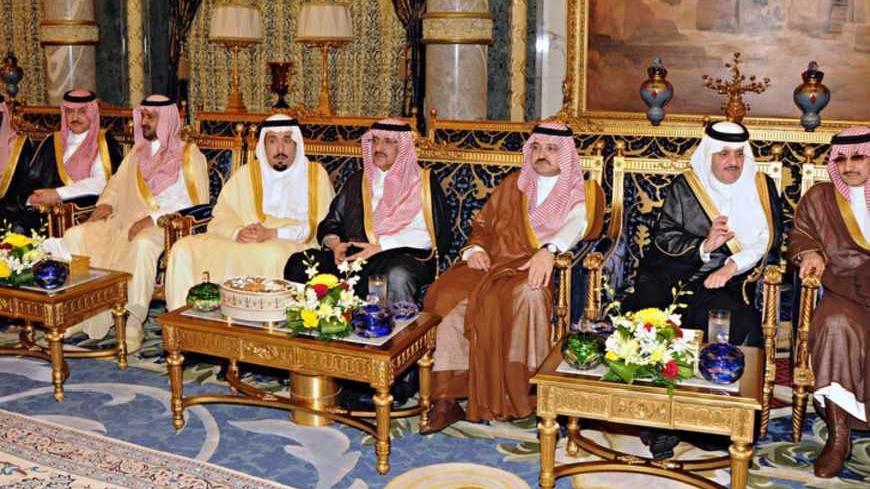 Saudi Arabia is neither an island of tranquility in a turbulent Arab sea nor a country on the verge of revolution. Rather, it is a kingdom in regression, plagued by regular reshuffling of princes and lacking energetic leadership with a serious vision for the future. Its aging king, Abdullah, has had two of his most senior brothers, Minister of Interior Naif and Minister of Defense Sultan, die within the last two years while he continues to hold on to the reins of power as an honorable senior member of an expanding clan-turned-corporation. All King Abdullah can do these days is micromanage the demands of the second-generation princes eager to secure a political post after his death, hence he regularly reshuffles.

Political posts in senior ministries bring not only power and privilege, but also incredible wealth, as ministers buy services and equipment for the state under conditions of opaqueness and corruption. The most recent reshuffle involved the sacking of Deputy Defense Minister Prince Khalid ibn Sultan, known as the Desert Warrior when he was head of the armed forces in the 1990–91 Gulf War, and his replacement with Prince Fahd ibn Abdullah ibn Muhammd ibn Abdulrahman. In January 2013, the powerful governor of the Eastern Province, Muhammad ibn Fahd, was relieved of his duties and replaced by Saud ibn Naif, the brother of the minister of interior, Muhammad ibn Naif, both descendants of the once powerful, but now-deceased Naif. These appointments put the Naif clan in charge of internal security and oil, the most important foundations for the survival of the Saudi monarchy.

Such reshuffles are bound to accelerate in the future, simply because the first rank of the royal clan is advanced in age, and each senior prince wants to ensure that his mini-fiefdom survives his death. Nothing will ensure this except the placement of a son in a senior government position. Needless to say, these reshuffles are a private family affair, with ordinary Saudis serving as mere spectators on the receiving end of sudden decisions. Saudi citizens have never had a say in such matters, which are driven by the balance of power between powerful clans within the Saudi royal family.

Saudis can only speculate why the king has sacked this or that prince and appointed another. Such curiosity surfaced when Khalid ibn Sultan was removed from the deputyship of the Ministry of Defense in April this year. Rumors circulated that he had "expired," with his performance deteriorating, especially when he mobilized the Saudi army against the Yemeni Houthis, who were able to trespass on Saudi territory. When Muhammad ibn Fahd was removed from the governorship of Eastern Province, it was attributed to his mishandling of the Shia riots that erupted in 2011.

It would be inaccurate, however, to assume that these reshufflings are solely a function of princely bad performance, as princes are not subject to regular appraisals. Many Saudi princes remain glued to their government chairs despite old age, illness and mismanagement in their jobs. Minister of Foreign Affairs Prince Saud al-Faisal, for example, has been in his post since 1975. Many princes are at the center of machinations involving serious fraud and corruption, yet remain in their positions unaffected by international media reporting on these affairs, which remain taboo in the local press.

The princely reshuffles are a function of the circulation of elites in a balanced and orchestrated game. Bringing a prince into a senior job and then dismissing him to appoint another one is the way power and wealth are distributed among a large circle of princely contenders. The king’s role has become to ensure fair play and occasional access to wealth and power. While all Saudi princes are recipients of monthly salaries, the value of which depends upon their seniority and closeness to the main al-Saud line, such salaries are no longer enough. They must be combined with government and administrative jobs, not to mention business interests on the sidelines to the extent of dominating the private sector through camouflaged companies and franchises.

While senior princes and their sons are reserved positions at the important ministries, minor princes are rewarded with soft power that allows them access to funds and constituencies. From patronizing youth and sport to tourism and literary salons, the lesser princes are thus also given a sense of their royal status. Even more important, they become stakeholders and thus have an interest in not rocking the boat and avoiding dissent. As long as there is imagination and money, there will be enough titles and posts created to absorb the growing number of second- and third-generation princes.

The indeterminate Saudi system of succession remains vague while claiming to honor the principle that only the most able is chosen for the highest position, including, for example, the kingship. So far, seniority has not been respected, as senior sons of the founder of the kingdom, Ibn Saud, have been in the past overlooked as contenders for the throne. Both brothers of King Abdullah, Mishal and Talal, have been surpassed as possible future kings despite their seniority. Such an indeterminate system creates apprehension, as no prince can take it for granted that he is second in line.

Moreover, the system creates the illusion that all princes have an equal chance of one day becoming king or crown prince. This uncertainly raises the hopes of a large circle of princes, especially at this time, when the first-generation princes are in decline. Young princes constantly occupy a waiting list for future jobs, which means that no one is willing to undermine the system just in case he is second in line for a coveted reward.

Both apprehension and illusion keep the al-Saud princes under control despite the noises some of them occasionally make to express dissatisfaction with their exclusion. This applies in particular to Prince Talal, who occasionally gives media interviews to voice his disagreement with arrangements in which he does not seem to be given any serious political responsibility. Yet, despite his exclusion from politics, Talal has little to complain about since he was lavishly rewarded with money and privilege that led to his son al-Waleed becoming a global business tycoon. Talal, like other princes, will nonetheless remain under the illusion that one day he may become king simply because of the unpredictability of the Saudi succession system.

The proliferation of second- and third-generation princes is destined to make Saudi Arabia a kingdom with multiple heads. Although King Faisal succeeded in centralizing the Saudi state in the 1960s and 1970s, his surviving brothers may have to live with a decentralized monarchy consisting of multiple fiefdoms, each led by the descendants of the main Saudi royal branches. They may need only an honorary king, a role that King Abdullah has been playing since 2005. The days of a centralized absolute monarchy in Saudi Arabia are giving way to a decentralized autocratic and secretive family corporation.

Madawi Al-Rasheed is a professor of social anthropology at King’s College, London, and the author of A Most Masculine State: Gender, Religion, and Politics in Saudi Arabia (2012). You can find more of her work at http://www.madawialrasheed.org. She tweets at @MadawiDr.