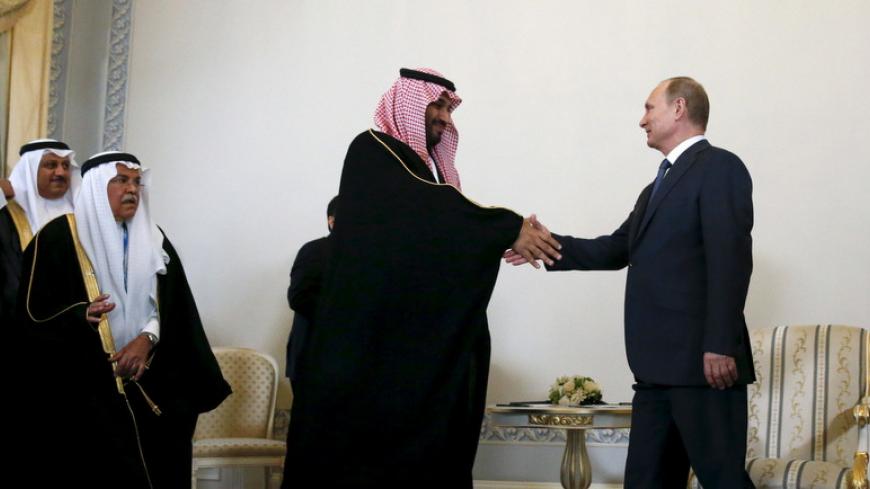 Deputy Crown Prince and Minister of Defense Mohammed bin Salman visited St. Petersburg in the last week and signed several agreements with the Russians concerning cooperation on oil, space and peaceful nuclear energy, as well as nuclear technology sharing. It is another high-profile mission for the 29-year-old son of King Salman bin Abdul-Aziz Al Saud, but it won't resolve the king's Yemen adventure.

Prince Mohammed was accompanied by Foreign Minister Adel al-Jubeir, Minister of Petroleum Ali al-Naimi and senior military and intelligence officials. Details on the agreements are few. The Saudis and Russians discussed cooperation on energy issues, investment and the global oil market. The two agreed to cooperate to achieve stability in the global energy market. It is unlikely the Saudis will reduce production, however, to raise prices.

Mohammed chairs the Saudi interagency super committee that oversees the oil and gas industry in the kingdom. This trip to St. Petersburg marks the first time the prince has engaged publicly on oil issues. It's likely his profile will rise on oil matters over time.

Russian President Vladimir Putin and Mohammed also discussed the war in Yemen. The Saudis want Russia to endorse their hard-line stand against the Houthi rebels. Moscow earlier abstained in the vote on UN Security Council Resolution 2216 that calls for the Houthis to withdraw from Sanaa. Putin and Mohammed also reportedly discussed the nuclear negotiations between Iran and the P5+1 (the five permanent members of the UN Security Council pus Germany). They also covered Syria, where Russia backs the Bashar al-Assad regime and the kingdom supports the opposition. Ukraine was apparently not mentioned.

Mohammed invited Putin to visit the kingdom and Putin invited King Salman bin Abdul-Aziz Al Saud to Russia. No dates have been set for either visit. There was no public discussion of any arms deals, a subject of much speculation during previous Saudi-Russian dialogues. The nuclear technology agreement is linked to very ambitious Saudi plans to build 16 nuclear reactors in the future.

Sending Mohammed to Russia is the latest sign of the power and influence the young prince has under his father. The deputy crown prince has now become the king's personal envoy for high-stakes high-profile diplomacy.

The visit also suggests that Mohammed is positioning himself as more independent than other members of the Saudi national security team who are pro-American. Jubeir and Crown Prince Mohammed bin Nayef are seen in the kingdom as very close to Washington. The royal family is disillusioned with US President Barack Obama and his policies in the region. Becoming the advocate of diversifying Saudi interests beyond the United States is a popular move for Mohammed bin Salman to take.

The Saudi media are hailing the visit as a milestone in Saudi diplomacy. The Saudis have tried to strengthen ties to Russia before to gain leverage in the region and with Washington. In the last years of King Abdullah's reign, his intelligence chief, Prince Bandar bin Sultan, went to see Putin several times to try to persuade Moscow to end support for Assad. Bandar allegedly offered cooperation on oil prices and lucrative arms deals to win Putin's support but the gambit failed.

Syria is not Mohammed's priority. He wants help in Yemen where the war is stalemated. The UN talks in Geneva produced nothing, with no dates even set for another round. Russia has no vested interest in Yemen, unlike its deep ties to Damascus, but it also has no leverage with the Houthis. The Russian option is good for Mohammed's image as a global player, but it won't deliver success in Yemen.