How stronger Russia-Saudi ties may be threat to Assad

The recent visit of Saudi Arabia’s deputy crown prince to Russia suggests a possible progression in Saudi-Russia relations. But what implications could such an alliance have on regional conflicts, particularly the Syrian crisis? 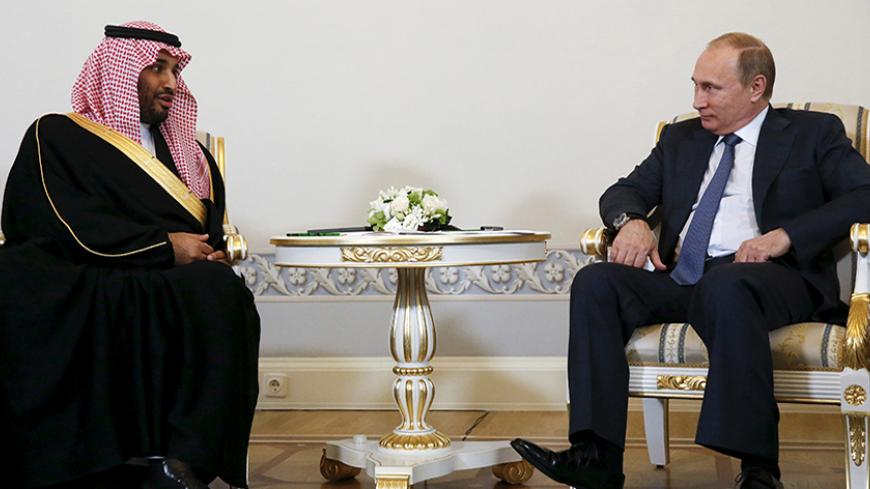 Reports of an apparently successful visit by Saudi Arabia’s Deputy Crown Prince and Minister of Defense Mohammed bin Salman to Russia suggest a potential improvement in Russian-Saudi ties — but could it also be bad news for Syrian President Bashar al-Assad?

In addition to meeting with President Vladimir Putin on the margins of the St. Petersburg International Economic Forum (Russia’s attempt at organizing its own version of the annual World Economic Forum in Davos, Switzerland), Mohammed signed agreements on oil, nuclear power and space. Other deals included a memorandum of understanding between the Russian Direct Investment Fund and the Saudi Arabian General Investment Authority on jointly investing up to $10 billion. Simultaneously, Saudi military officials attended Russia’s “Army 2015 International Military Technical Forum” in Kubinka and Saudi officials openly speculated about buying Russian ships and missiles.

No less significant, Mohammed told Putin that Saudi King Salman bin Abdul-Aziz Al Saud accepted his invitation to visit Russia and conveyed the king’s reciprocal invitation to Putin — which the Russian leader accepted “with pleasure.” According to the Kremlin’s website, Putin has not been to Saudi Arabia since meeting King Abdullah bin Abdul-Aziz Al Saud in February 2007. (Abdullah never visited Moscow.)

The Kremlin’s official reports reveal that while Putin has had a few telephone conversations with Saudi Arabia’s rulers over the last decade, his personal interactions have been limited to the Saudi foreign minister and occasional meetings with Prince Bandar bin Sultan, a former top official.

Putin’s last reported meeting with Bandar, in August 2013, appears to have been quite contentious. According to one published account, Bandar, who then headed the Saudi intelligence agency, sought Russia’s cooperation in Syria and offered a variety of inducements, including cooperation on investment, energy and even military matters. At the same time, he apparently suggested that Saudi Arabia “controlled” Chechen groups that could threaten security at the Sochi Olympics — an implicit threat. Putin reportedly described Riyadh’s ties to the Chechens as “completely incompatible” with the potential cooperation that Bandar outlined.

To put this in context, Putin himself had earlier — and unsuccessfully — sought to persuade the Saudis to desist in their support for Chechen rebels by sending Chechnya’s president, Akhmat Kadyrov (father of current President Ramzan Kadyrov), to Saudi Arabia in 2004. In a message to then-Crown Prince Abdullah, delivered by Kadyrov and released by the Russian government, Putin wrote that Moscow viewed the trip as one of “great importance” and that it was of “tremendous significance to reach consensus on the Chechen issue with the Muslim world, of which Saudi Arabia is one of the leaders.” Less than four months later, Kadyrov, the chairman of Chechyna’s State Council, two bodyguards and two civilians died when a bomb exploded at a stadium where Kadyrov was attending a commemoration of Russia’s World War II victory.

Against this backdrop, it is worth noting that the St. Petersburg agreements look quite similar to what Bandar was reportedly offering Putin two years ago. This immediately raises an important and interesting question. Is Russia now prepared to take (or, in fact, in the process of taking) the deal it declined in 2013?

On the Saudi end, Riyadh’s frustration with Washington over the potential Iran nuclear agreement and its impact on the kingdom’s security and regional interests has become widely known and has already been linked to Mohammed’s outreach to Russia. If Saudi Arabia is already trying to find its own solutions in Yemen (albeit with mixed results), why should it not try to do the same in Syria?

At the same time, the Assad regime’s weakening position on the ground in Syria might have encouraged some in Moscow to wonder how long the Syrian government can survive. Thus far, Russia’s interest in political dialogue to resolve the Syrian civil war has correlated closely with Assad’s battlefield successes and setbacks, with Russian officials more committed to talks as Syria’s regime falters. So it is notable that Moscow announced a new agreed-upon effort at a negotiated solution to the fighting during Syrian Foreign Minister Walid Moallem’s June 29 visit to Russia.

No less interesting, Moallem met not only with Lavrov but with Putin, who appeared to propose a new international coalition — including Syria — to fight the Islamic State (IS). Russia has regularly insisted that the United States and others conducting airstrikes against IS fighters inside Syria should coordinate with Damascus, but the Russian president appeared to go further this time, saying, “We call on all of our friends, including our friends in Syria, to do everything possible to establish constructive dialogue between all countries that want to fight terrorism and, of course, continue developing constructive relations with everyone who is already giving Syria their support today.”

Morever, Putin specifically referred to Saudi Arabia in his sentences that immediately preceded this statement. “Russia has very good relations with all countries in the region without exception, and our contacts with these countries show that all of them are ready to make their contribution to fighting the evil that is the Islamic State. This is true of Turkey, Jordan and Saudi Arabia.” Admitting the difficulty in assembling such a group, he concluded by saying, “We know that misunderstandings, friction and temporary problems do frequently arise between neighbors, but it is certainly essential for everyone to unite their efforts for the sake of combating this common evil.” Lavrov made a similar case in his joint press appearance with Moallem.

While Russian officials may hope to get Saudi Arabia and others on board in cooperating with Syria against IS, it appears unlikely to happen — especially at a time when the Assad regime is losing ground. Putin himself delicately acknowledged the Syrian government’s deteriorating position in his public comments as he began his meeting with Moallem, saying, “Success always comes hand in hand with problems, too, and military defeats are also possible.”

With that lead-in, Putin’s insistence that “we are confident that the Syrian people will ultimately be victorious and we remain committed to our policy of supporting Syria, its government and its people” sounds more like necessary diplomatic rhetoric than a strongly held conviction. This in turn makes the coalition idea look like an effort to make the best of a bad situation and, together with the public promises of ongoing assistance, to strengthen the regime’s weak hand in any new talks.

Real Russian cooperation with Saudi Arabia on Syria (or, for that matter, on Yemen, oil markets, nuclear energy or other issues) won’t be easy even if both sides are motivated. On top of strategic differences over Iran, the two governments have had quite divergent attitudes toward who is a terrorist and who isn’t, with significant consequences in Afghanistan and, most important, Chechnya. Still, events are moving in interesting directions — and Assad should worry.