Russia is working to turn domestic challenges into opportunity. 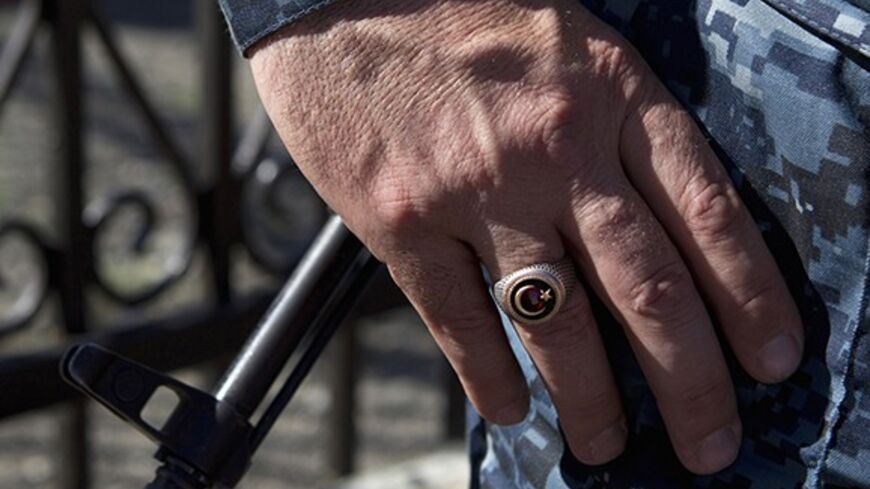 A policeman wears a ring showing the Islamic symbol of the star and crescent, Itum-Kale, Chechnya, April 29, 2013. - REUTERS/Maxim Shemetov

When it comes to the security of the Russian Caucasus, Chechnya is a buzzword. Traditionally in the spotlight are developments in the republic  and the personality of its leader, Ramzan Kadyrov, and his relations with Russian President Vladimir Putin; rarely on the radar of foreign experts and diplomats is the vibrant diplomacy Chechnya conducts in the Middle East. Although many inside Russia see this self-made foreign policy as a drift toward even more de facto independence, Chechnya’s activity in the region may breathe new life into Russia’s relations with many of the Middle Eastern states who don’t see eye to eye with Moscow.

The very phenomenon of direct outreach to the Muslim world is not a new thing in post-Soviet Chechen history. During the two wars (1993-1996 and 1999-2000), first separatist and then jihadist warlords found sympathy in Turkey and some Gulf states, where some are still harbored. With Putin's rise to the Russian presidency, Akhmat-Haji Kadyrov, the father of current Chechen President Ramzan Kadyrov and the former mufti of the unrecognized Chechen Republic of Ichkeria, was elected the first president of Chechnya.

In January 2004, after just two months in office, he traveled to Saudi Arabia to declare, “Chechnya will become a linking chain in Russian-Saudi relations.” It certainly was symbolic since both countries needed a reset of their stark relations, and Putin called on the Saudis to help rebuild Chechnya by financing large infrastructure projects. Most importantly, during the trip, Akhmat-Haji Kadyrov suggested the creation of the International Center for Interpretation of Islam — an institution that would, among other things, issue fatwas responding to terrorist attacks carried out in the name of Islam.

His assassination in a bomb blast in May 2004 halted this and other initiatives. But his son continued the efforts immediately upon seizing power in 2007: Ramzan Kadyrov impressed a delegation of the Organization of the Islamic Conference (OIC) visiting Chechnya by the scale of its progress after a decade of conflict. By 2010, he was privileged to be the first of all the foreign statesmen to twice participate in the ablution ceremony of Kaaba and become the first Russian Muslim ever to do so. In subsequent years, he became a welcome guest at many royal households, meeting with King Abdullah bin Abdulaziz of Saudi Arabia, King Abdullah II of Jordan and dozens of other Middle Eastern movers and shakers, including twice with the Palestinian leader Mahmoud Abbas.

Through the Department of External Relations — Chechnya's analogue of the Foreign Affairs Ministry — slowly but surely Chechnya increased the number of its political, economic and cultural contacts in the Middle East. Most recently, in November 2013 Kadyrov toured the United Arab Emirates, Jordan, Bahrain and Saudi Arabia “to attract capital for new investment projects.” But there’s more to this activity that goes far beyond any “public diplomacy” standards. His prime objective is to make Chechnya a regional, if not global, holy destination for Muslims. He invited notable Arab theologists and brought Muslim relics to the republic, thus claiming to legitimize himself outside the region as the Chechen leader. His meeting with the Chechens in Jordan signaled another vital intent — Kadyrov wanted to embrace an enormous Chechen diaspora of approximately 130,000 people living in Turkey and many Middle Eastern countries that would seriously raise his personal and political profile. Finally, like his father, he wanted a special role for Chechnya as a bridge between Russia and the greater Muslim world. It should be noted none of this can come without Putin’s silent consent. In fact, Moscow can bear some good fruit from it — it already does.

First, by showing a new image of Chechnya where Muslims are given all their rights (for instance, Chechnya’s capital Grozny boasts the biggest mosque in Europe), Russia makes invalid some of the extremists’ claims of Islamic repression. In this regard, Chechnya is a showcase that proves Moscow can take care of those Muslim communities who stay loyal to the Kremlin, even if it comes at a price.

Second, many Middle Eastern decision-makers find the authoritarian Chechen president a like-minded fellow for whom Western liberal values are equally unacceptable. Kimberly Marten of Columbia University righteously called him a “strong-arm broker in a weak state.” Ironically, it is this quality that makes him, in the Kremlin’s judgment, a good ambassador to the Middle East and gives Russia additional leverage as a country with whom it’s easier to do business than Western partners. At a time when US regional allies complain about its wavering stance and Moscow wants to ride the wave, the diplomacy of the once-separatist republic may come in handy.

Finally, with its inclination toward Shiite-dominated governments, Russia’s image among Sunni Muslims has been significantly damaged. There’s no love lost between Moscow and Riyadh, Doha and Abu Dhabi, so therefore Kadyrov’s shuttle diplomacy potentially opens another channel for Russia to restore its popularity among Sunni-majority states.

With more than 20 million Muslims and an observer status at the OIC, Russia clearly needs such channels. Now that it seems to be on the offensive in the Middle East, it certainly will try to make the most of them despite serious domestic constraints. The North Caucasus is becoming an integral part of Russian Middle Eastern policy, since many of Moscow’s initiatives in the region are driven largely by the imperatives of its own turbulent area. Be it Syria, the Kurds or Chechnya, Russia learns the craft of turning its domestic challenges into opportunities in the Middle East.