Russia is finding the Republic of Chechnya’s influence to be very helpful in Syria. 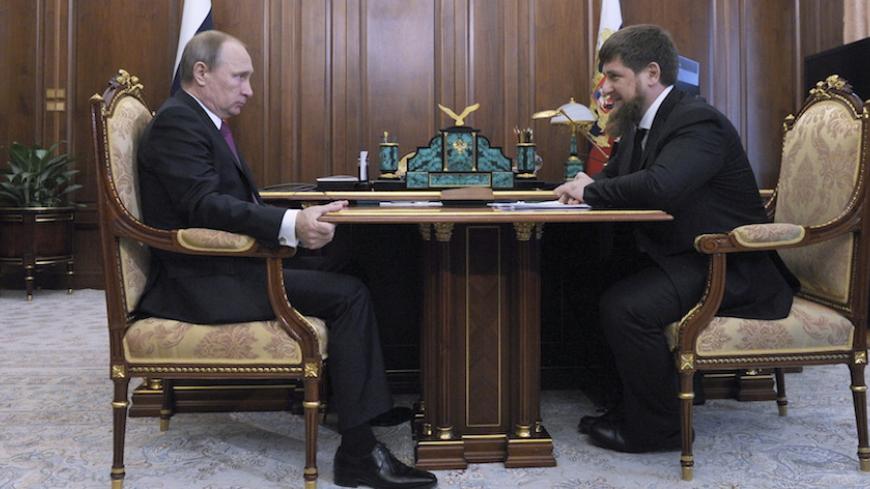 As Russia has increased its presence in the Middle East, Chechnya has come to play an important role for Moscow in a number of ways. Not only did its leader, Ramzan Kadyrov, use his personal authority and contacts to convey Kremlin messages for several regional governments, but Chechnya has also helped channel Russian influence in various situations. Syria is no exception.

In December, the presence of Chechen fighters among Russian troops was the subject of numerous reports. Kadyrov initially denied any such presence, but suggested that if the Kremlin had to give the order, the troops stationed in Chechnya would be happy to go “fight the scum in Syria.” In January, the Chechen leader admitted that a military police battalion composed of ethnic Chechens was indeed in Syria as part of the Russian Defense Ministry forces. By that time, a video had been leaked of the forces — allegedly about 500 men — awaiting departure to Syria. But most importantly, two of Kadyrov’s own messengers visited Syria and met with the servicemen.

The meetings and subsequent report to Kadyrov on the situation in Syria produced some interesting decisions.

The Regional Public Fund — which is named after Akhmat Hajji Kadyrov, Ramzan Kadyrov’s father — decided to restore the UNESCO World Heritage-listed Umayyad Mosque in Aleppo, which was destroyed by the Islamic State (IS). The fund is a charitable foundation established in 2004 to assist Chechens, but has since extended its activities to aid people in different parts of Russia and abroad, particularly in Somalia and Syria. In February, the foundation organized the delivery of more than 10 tons of food and other relief aid to Syria.

In September, the fund had sent more than 2,500 sheep, 100 bulls and 10 camels to residents of Damascus, Latakia and Tartus on the occasion of the Kurban Bayrami (Feast of the Sacrifice, also known as Eid al-Adha), and also provided 7,000 Syrian children with school kits. Next, the foundation plans to fund construction of several orphanages in Aleppo for children who lost their parents in the war. The initiatives are set to reinforce the Chechen leader’s image as a caregiver in remedying Middle Eastern grievances and as a principal defender of Islam.

Kadyrov claims IS was “generated by Western intelligence forces [and] has nothing to do with Islam.”

“On the contrary, [it] … seeks to destroy Muslim countries [and] make Islam appear to be the main evil in the eyes of the rest of the world,” Kadyrov wrote on his Instagram page.

The religious connection is particularly vibrant in Chechnya’s outreach to Syria. As a follow-up to the Chechen mufti’s visit to Syria, Mohammed Abdul Sattar — the minister of religious endowments for religious affairs (Awqaf) of Syria and one of the Sunni leaders who have remained loyal to Syrian President Bashar al-Assad — came to the Chechen capital of Grozny on a two-day visit in early March. Accompanied by the director of the Syrian youth movement and representatives of several Syrian waqfs, Sattar met with Chechen clergy and Kadyrov himself.

The men discussed further cooperation on religious affairs as well as academic exchanges between Chechen and Syrian students from Damascus University. They also discussed ways of combating the ideology of terrorism, including Chechnya’s work to help war-traumatized youths adapt to postwar life.

So Chechnya has various avenues of influence in Syria that could be of value to Russia.

As for the deployment of the Chechen battalion in Syria, Alexander Sotnichenko, a retired Russian diplomat and a Middle East expert, told Al-Monitor there were at least three reasons for Moscow to station the force there. He said, “First, it was necessary to provide security for the Sunni population, which occasionally experienced raids from Shiite militant groups who … were critical in capturing [Aleppo]. In this respect, Chechen forces were there to show that Russia isn’t setting Sunni residents adrift. Second, since the Russian participation in storming Aleppo was less robust than that of pro-Iranian forces, deploying a special forces group is a way for Moscow to secure its own part of the town and maintain influence on the ground.”

Last week, Daniel Martynov, Kadyrov’s aide on security affairs, confirmed that before they were sent to Syria, the Chechen units received top-quality training from Russian military intelligence counterterrorism task forces. Also, all of the servicemen know Arabic, with some speaking the Syrian dialect. Martynov said that over the course of their presence in Syria “they have been attacked several times but luckily didn’t suffer any casualties.”

The third reason Kadyroy has Chechen servicemen in Syria, Sotnichenko said, is “to alter the negative image of Chechens, who are largely viewed in Syria as ‘terrorists,’ since many of them have been fighting on the side of radical groups,” including IS. Indeed, Chechens have a reputation for being ferocious, skillful and thus valuable fighters and many have made it to the top ranks in their organizations.

Akhmet Yarlykapov, Russia’s leading expert on the Caucasus and Islamic Studies, said that there were about 3,000 ethnic Chechens fighting for IS and other extremist groups, but that most are from Europe, with only about 500-600 from Chechnya itself. Of that 500-600, 200 people, according to Yarlykapov, have been killed in Syria and Iraq and about 50 managed to return to Russia.

In the West, news that Moscow deployed Chechens to Syria triggered a rather negative backlash. Journalists reporting on the story referred to international rights groups who feared extrajudicial killings and other unlawful activities from the forces. To change that perception, Russia makes sure Chechen military men are now frequently shown on camera distributing Russian humanitarian aid to war-torn cities, especially Aleppo.

In Russia, the news was well-received. In Moscow, Leonid Kalashnikov, the head of the Duma Committee on the Commonwealth of Independent States’ Affairs, praised the decision, saying there were several grounds for it, including “the fact that Chechens know how to fight and their mentality is similar to that of Syrians.”

In Chechnya itself, the response was a rather mixed bag, as fighters’ relatives were puzzled over the decision to prolong their stay in Syria and why their duties have been changed from securing the Russian military base in Khmeimim to safeguarding parts of Aleppo. The father of a Chechen soldier serving in Aleppo told a Russian media outlet in mid-February that he expected his son to be back home by the end of that month “as was initially promised.”

He said, “Nevertheless, my son is happy with how everything is going so far. He says their main duty is to patrol the streets, guard different objects and convey cargos. He also says Aleppo is very much like Grozny in early 2000 — everything is destroyed and people are surviving on humanitarian aid.”

For now, the Chechen battalion is scheduled to stay in Syria until August. Both the date and the duties performed are subject to change depending on the situation there and the course of Russian foreign policy in the region. But clearly, military might is not the only channel of “Chechen influence” in Syria that Kadyrov can deliver to Moscow.