Is the Chechen 'bogeyman' heading to Syria?

Russia is playing up similarities between its past struggles and Syria’s civil war. 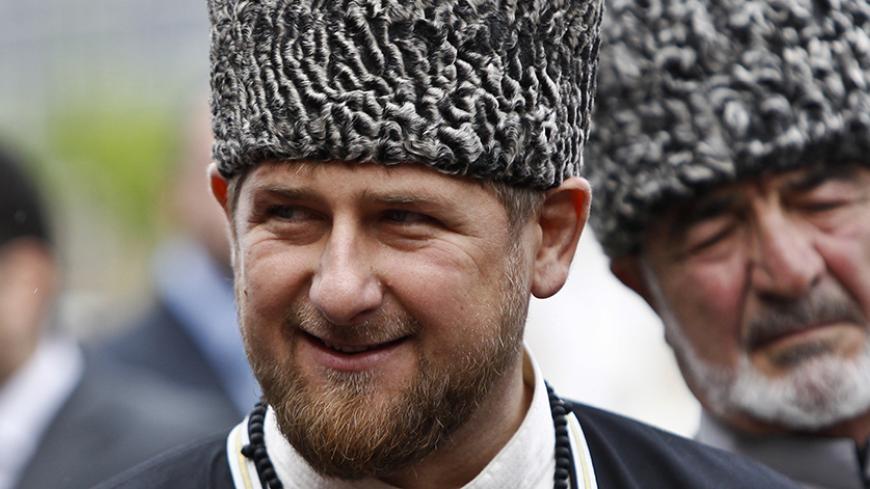 Kadyrov met Nov. 15 in Grozny, Chechnya, with Syrian “internal opposition groups." The gathering included members of the Syrian parliament, and political, religious and public figures that make up the National Coordination Committee for the Forces of Democratic Change. Kadyrov, who posted information from the meeting on his Instagram account, said he empathizes with Syrians regarding their country’s crisis and linked it to what Russia has experienced in its recent history.

“We’ve known exactly the same things Syria is now going through — killings, destruction and refugees. That is why we share your hardship,” he said. “There were terrorists from about 51 countries fighting Russia in Chechnya back in the day, and no country assisted Russia in that struggle.”

Syrian delegates, for their part, said they came to Chechnya to see with their own eyes “how the goal of defeating international terrorism and restoration of the republic were achieved.”

Kadyrov leads what was once Russia’s most problematic territory. Now, he’s actively engaged in Track II diplomacy in the Syrian crisis. This change reveals a facet of Russia’s Syrian strategy that many have spoken about but few have seriously considered.

Kadyrov has long been active on Russia’s foreign policy front. For about a decade he has established himself as an almost-indispensable foot soldier of Russia’s war on terrorism, with a huge personal attachment to the cause. In 2004, his father — Akhmat-Haji Kadyrov, the first president of the Republic of Chechnya — was killed in a bomb blast.

Ramzan Kadyrov, known as a consistent critic of “Western hypocrisies,” at times has proved useful to Russia’s general foreign policy course. For example, amid conspiracies in the Russian blogosphere about Western intelligence services being behind the recent Paris attacks, Kadyrov put aside his usual sharp criticism of the West and took a rather mainstream position, stating that “no one doubts” that the Islamic State (IS) was behind the attacks in France.

His close relationship with Russian President Vladimir Putin makes both men easy targets for criticism when the policies of one are used to hurt the other. Indeed, Kadyrov’s initiatives are controversial. Not only do they not meet Western standards for democratic rule, they sometimes contradict even Russian law.

To many of his liberal critics in Russia, Kadyrov has become a living embodiment of “all the flaws in Putin’s system.” For those in the West, Kadyrov has long been a bogeyman. Therefore, any speculative talk of him being involved in the Syrian conflict in any form triggers negative reactions ranging from serious concern to panic.

Recent accounts of Kadyrov preparing to send his elite special forces to battle IS reflect those fears. However, the accounts accurately point out that, should there be a need for such deployment, Kadyrov would be genuinely happy to showcase his loyalty to the Russian president. Kadyrov’s promise to “tear [IS] to pieces swiftly and decisively” is mere public bravado, as his military units are too small for the challenge. But they are effective enough for targeted strikes that would make jihadists’ lives more miserable.

That military component is the least he can offer to help implement Russian strategy in Syria. But Kadyrov also holds several layers of political capital. First, he is a frequent commentator on key international events, especially those relating to Islam, extremism and the war on terrorism. He is always widely cited in the Russian media alongside top Russian leaders. Whether one finds his comments annoying or helpful in promoting the Russian narrative, he is an opinion-maker for a spectrum of the peoples in the North Caucasus, the rest of Russia and abroad.

At times he even coins his own phrases. For instance, in his interpretation, "IS" stands for “Iblis State” (“Devil State”) rather than Islamic State. He frames the spread of the group’s influence as “shaitanization” (from “Shaitan” — Satan). In today’s information age, gaudy terms like these attract audiences and help compose an anti-IS information strategy. Besides, certain capital accumulated by Chechnya’s own diplomacy in the Middle East since the mid-2000s may be a political resource Moscow now needs to stay the course in Syria.

Second, Kadyrov crafted his own policy on reintegrating former jihadists who fought for IS, Jabhat al-Nusra or other extremist groups. The fighters returned home either disappointed with the idea of the Islamic caliphate, or to continue their fight in their own regions. Kadyrov’s policy has been barraged with criticism, but it clearly reflects how his personal views have evolved regarding IS.

Previously, Kadyrov believed the only way to defeat IS was through total annihilation. Now, he is more inclined to intellectually engage “prodigal Chechen children” who have strayed into Islamists nets. In going from sticks to carrots, he now uses persuasion and personal talks to try to reverse their thinking, even enlisting their families’ help.

This methodology also reveals Kadyrov’s vision of securing his own power in Chechnya.

Alexey Malashenko, a prominent Russian expert on the Middle East and the Muslim world, points out that IS is offering $5 million for Kadyrov’s head, but only $25 million for the heads of Kadyrov’s 12 closest friends and colleagues. Indeed, IS has long threatened Russia and its North Caucasian Federal District — most recently soon after the plane crash over the Sinai desert — promising to “free Chechnya from Russia” and hence from Kadyrov himself.

A closer look at the operational side of Russian airstrikes in Syria shows Moscow has been taking these threats seriously for a long time. Two non-IS groups persistently bombed by Russia’s initial airstrikes in Syria were Katibat Al Tawhid Wal Jihad, dominated by ethnic Uzbeks, and Jaish Al Muhajireen Wal Ansar, dominated by Chechens and supposedly Crimean Tatars. Russia targeted both groups because of the potential threat they pose to Russia’s most vulnerable areas of Central Asia and the North Caucasus.

Both groups had sworn their loyalties to and later merged with Jabhat al-Nusra, beefing up its presence in the Aleppo province. In fact, Russian security forces recognized that the flow of sympathizers from the Caucasus is directed toward Jabhat al-Nusra affiliates and IS alike. Therefore, there is little, if any, difference between them and IS in Russian security concerns, even despite occasional reports of spats between Jaish Al Muhajireen Wal Ansar and IS.

Finally, the Chechen case offers experience in political transition after a years-long bloody conflict. Engaging those who can be engaged and marginalizing those who cannot — through local means and players rather than outsiders — could be the basis for the ultimate “Chechenization” of the Syrian conflict discussed among Russian experts and decision-makers. The approach surely is not flawless, and those who seek to pull the rug out from under that policy will find enough reason to do so. Neither can it be merely copy and pasted; it must be adjusted for local specificity.

However, as the interested parties chart a road map for the Syrian transition and settlement according to the principles of the Vienna final communique, Moscow will most probably advance the vision.