What is Chechnya's Kadyrov up to in Middle East?

Chechen leader Ramzan Kadyrov has recently been engaging leaders in the Middle East, but not just with Chechnya's interests in mind. 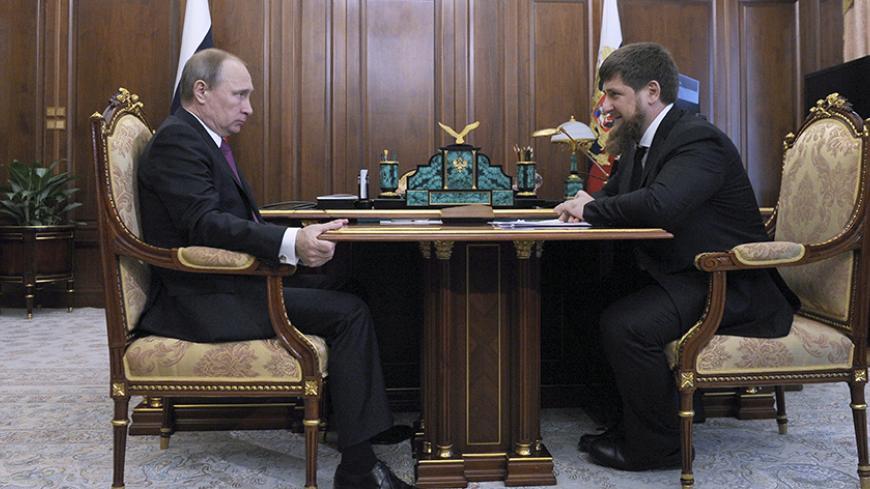 In recent years, Chechnya has been conducting a dynamic activity beyond Russia’s borders. Once a rebellious land, but now one of the most loyal republics to the Kremlin, it has built a number of economic and political contacts, including some of the most influential leaders in the Middle East. Its charismatic leader, Ramzan Kadyrov, positioned himself as a staunch “foot soldier” to Vladimir Putin willing to provide support — military and political alike — for whatever initiative the Russian president comes up with. Kadyrov has been extremely supportive of the Russian operation in Syria: He supported Chechen volunteers fighting for Assad as well as sending members of Chechen law enforcement to help guard Russian military facilities in Syria.

On Nov. 27, Kadyrov came to Saudi Arabia at the invitation of Deputy Crown Prince Mohammed bin Salman, also the defense minister and chairman of the Council on Economic Affairs and Development. The two discussed the issues of combating terrorism and religious extremism as well as relations between Russia and Saudi Arabia in the region. Kadyrov’s visit is timely: Russia is helping the Syrian government to gain more ground, and as interested regional parties are trying to figure out the future for Syria and themselves after the US election, some — especially those who feel their position is unlikely to get any stronger under the new administration — continue to seek better relations with Moscow. From that perspective, Kadyrov might be a Kremlin messenger. Having warm personal ties with Saudi leaders, a reputation of being a strongman and ambitions of becoming a renowned Islamic authority, he is well-positioned to better convey Russia’s interests to the Saudis as well as to negotiate thorny issues between Moscow and Riyadh.

Recently, Kadyrov has proved helpful to Russian diplomacy in the region. In October 2016, he came into the spotlight as a top middleman for getting three Russian sailors released in Libya. Members of the Russian tanker Mechanic Chebotaryov were captured by Libyan authorities in September 2015 on accusations of oil smuggling. The process of releasing the sailors was a lengthy, diplomatic effort: Two members of the crew were released within a month after the seizure in October 2015, but it took almost a year to free the other three. The Chechen leader boasted of his role in the negotiation process on his Instagram account, saying his personal aide, Adam Delimkhanov, had been directly in touch with the chairman of the Libyan Council, chairman of the Higher State Council and head of the Libyan investigation committee throughout the process. Kadyrov also noted that Russian Foreign Minister Sergey Lavrov was personally involved in the release, while sending the Kadyrov delegation to Tripoli was coordinated with the Russian Foreign Ministry. It is remarkable that the unique contacts the Chechen leader has built are being occasionally used by Moscow in its diplomatic activity, including double-track initiatives.

Those who are more suspicious of Kadyrov see these efforts as an attempt to enlarge his own power and gain Chechnya more “de facto international legitimacy.” One of Russia’s experts on the Caucasus, who preferred to be quoted on condition of anonymity, said, “To date, Kadyrov understands that the project of a successful and prosperous Chechnya can and should be implemented within the Russian Federation — no doubt he is not fostering separatist ideas. But as someone thinking about the future, he also understands that his “personal contract” with Putin may be reviewed at some point — not necessarily under Putin himself. Therefore, it makes sense to build relationships while there is such opportunity — just in case.”

Indeed, not only is Kadyrov promoting Russian interests through his regional contacts, but he is also taking the opportunity to bring foreign investments to Chechnya. For instance, during his visit to Saudi Arabia, Kadyrov met with Majed al-Kassabi, the Saudi minister of trade and investment, and with Prince Mohammed, who is also the co-chairman of the joint Russian-Saudi State Commission. Chechnya’s prime minister, Abubakr Edelgeriyev, has also long discussed with Saudi colleagues crop projects with Saudi Arabia.

Israel is becoming yet another source of investments for Chechnya. As a result of the recent trip of Chechen ministers and business people to Israel, the introduction of a large milk farm (up to 1,200 cows) has become possible in Chechnya using money from Israeli entrepreneurs. Construction of a factory producing fish food is another project under development between the two parties.

Taking into account that millions of ethnic Chechens are living all across Europe and the Middle East, Kadyrov is also trying to project an image of being a leader for all Chechens, not just as being the head of the Chechen republic. In September, he surprised many by funding construction of a mosque in the Israeli town of Abu Ghosh, populated predominantly by people who self-identify as Chechens. So the idea of reaching out to the Chechen diaspora is not alien to him either.

Finally, at the international level Kadyrov is trying to play out what is likely his strongest attribute: “fighter of all things Salafi.” Last week, he announced that the International Training Center for Elite Special Forces will be built in Chechnya by 2018. The planned center would be situated on 400 hectares (1.5 square miles) and have up to 40 training facilities, including shooting ranges, swimming pools and a runway. The center would focus its activity mainly on three aspects: climbing buildings, planting and using explosives, and hostage release. In announcing the center, Kadyrov said he’d like to invite about 200 “American private military instructors” to work at the center: “I don’t think those American special forces that are now on active duty can teach Russians a lot of new things. Yet you can’t deny that there are really cool guys in the US with great experience in covert operations in Latin America, Asia, Africa.” He indicated that a number of unnamed countries are interested in sending their special forces to the center, saying, “Today we cannot mention whom we have reached final agreements with. Some countries prefer not to publicize their involvement. Almost all of the former Soviet Union republics are willing to send their people. Besides, the head of the center has had contacts with the military and diplomats from Argentina, Denmark, Belgium, Canada, Norway, Pakistan, Oman, South Africa, Tanzania, the Philippines and many others. It’s more concrete with the Chinese with whom we’ve already exchanged delegations.”

The move to capitalize on Chechnya as a success story of defeated terrorism trails back to an event earlier this year when the Russian National Security Council held, in the Chechen capital city of Grozny, a seventh international meeting of high-ranking security officials. All in all, there were 300 people from 75 countries. Interested participants had an opportunity to have a tour of the site of the proposed center and talk through the details of potential cooperation.

The major question of whether activity of the Chechen leader better serves the interests of the Russian state or those of Chechnya will be keeping analysts thinking — and divided in their conclusions — for a while. However, as long as these two lines are not mutually exclusive, Moscow will most probably be using Kadyrov's potential to diversify the tools of its own engagement in the region.