Chechen jihadis in Syria seek to join the forces defending Ukraine against Russia while condemning the participation of pro-Russian and leader of Russia's Chechnya region Ramzan Kadyrov in the Russian invasion of Ukraine. 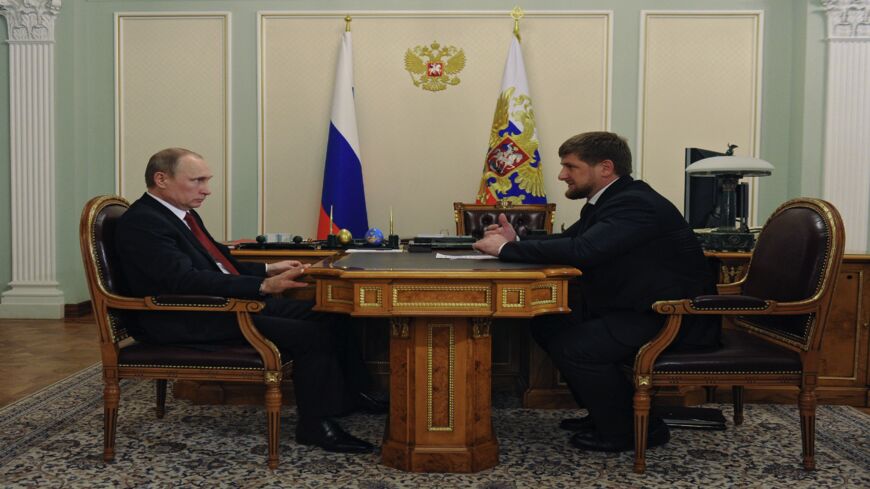 ALEPPO — The participation in the Russian war on Ukraine of Chechen fighters led by Ramzan Kadyrov, leader of Russia's Chechnya region and henchman of Russian President Vladimir Putin, has sparked widespread controversy among the Syrian opposition.

Some described him as a treacherous agent and Putin's pampered boy taking part in crimes against humanity under false and deceptive religious slogans.

For their part, jihadis in Idlib condemned Kadyrov and his soldiers who participated in the invasion of Ukraine as infidel apostates who departed from the religion of Islam.

When Putin declared the military operation against Ukraine on Feb. 24, Kadyrov stood in the center of the capital city of Chechnya, Grozny, to address more than 10,000 Chechen fighters who were to be deployed to the battlefronts in Ukraine.

On his Telegram channel, Kadyrov confirmed that 70,000 volunteers are ready to fulfill Putin's orders. “These Chechens chose to become heroes and sacrifice their lives for the security of both countries. They received orders to minimize civilian casualties in Ukraine.”

A jihadi source close to Hayat Tahrir al-Sham (HTS) in Idlib told Al-Monitor on condition of anonymity, “The Chechens fighting with the Russian army are apostates. They have departed from the religion of Islam, even if they claim to be Muslims who fast and perform the five daily prayers. They are siding with an enemy who openly shows enmity against Islam. Volunteering in the Russian army is blasphemy and apostasy, let alone participating in a destructive war against Ukraine.”

The source added, “The Chechen soldiers participating in the Russian invasion of Ukraine are no different from the soldiers of the Russian army. They are both occupiers, but the Chechen fighters are falsely brandishing the Islamic religion. They are in fact deceitful and have breached the morals of Islam, which is against occupiers who destroy countries and displace people.”

Syrian journalist Ahmed Muwaffaq Zeidan, who hails from Idlib province, said on Twitter, “The sight of thousands of Chechen soldiers praying before partaking in Putin's Holocaust in Ukraine requires real Chechen leaders, not traitors, and the nation's scholars to raise their voice in all languages ​​against them and against their exploitation of Islamic slogans before they kill innocent people.”

Iraqi HTS leader Maysara bin Ali, better known by his nom de guerre, Abu Maria al-Qahtani, said on Telegram, “It is not permissible for Chechen Muslims to support the criminal Russian [state] in fighting the Ukrainians. Muslims in Chechnya should not follow Kadyrov’s footsteps in his support for Putin. Russia has killed thousands of Muslims and is still killing them. Strengthening Russia in Ukraine means strengthening criminals. We ask God Almighty to turn Ukraine into a graveyard for Putin’s soldiers and those who support him.”

Jihadis opposing HTS in Idlib share the same opinion regarding the participation of the Chechens in Russia’s war on Ukraine. Abu Hamza al-Kurdi, a jihadi who defected from HTS, also said on Telegram, “Perhaps among these Chechens are some who fought, killed and wounded the Russians. Some of them have even lost a father, an uncle, a brother or a relative in the war of the Russians.” He argued, however, that they have let their whims and love of power control them and turned into soldiers and servants of “the tyrant” and are willing to sacrifice their lives for his sake.

Sheikh Abd al-Razzaq al-Mahdi, who is close to HTS in Idlib, urged the Chechen soldiers to expel the Russian army from their country and not participate in the war against Ukraine. “It is so sad and unfortunate how Kadyrov and some sheikhs with heretical teachings are misleading these young men,” he said on Telegram.

Amidst the campaign against Kadyrov, jihadis believe that his soldiers have been fighting alongside the Russian forces deployed in Syria for nearly seven years. But the presence of anti-Russian Chechen jihadis in Idlib gave the opposition and jihadi quarters in Syria a clear picture of the situation in Chechnya, where fighters are divided in their loyalties.

Hundreds of Chechen jihadis are mostly deployed in Idlib as part of the Jund al-Sham (Soldiers of the Levant) group led by Murad Margoshvili, also known by his nom de guerre, Muslim Abu al-Walid al-Shishani. Jund al-Sham, an independent group founded in 2013, has been at odds with HTS since early 2021. In October 2021, HTS launched a military campaign against the group and asked it to leave its posts in the Latakia countryside and dissolve itself or join its ranks.

Since that time, these fighters have been living in the Jisr al-Shughur area west of Idlib. In December 2021, Shishani’s residence was hit by a Russian airstrike in what is believed to be an assassination attempt. He survived the strike while several members of his family were injured.

The Chechen jihadis in Idlib do not speak Arabic, which made their contact with the Syrian community difficult. Also, Shishani is classified by the US State Department as the leader of a terrorist group in Syria since September 2014 and is accused of building a base for foreign fighters in Syria.

Commenting on the Russian invasion of Ukraine, a jihadi source close to the Chechen fighters in the Jund al-Sham told Al-Monitor on condition of anonymity, “Our members are closely monitoring the Russian war on Ukraine. They are very upset by the participation of the Chechens in Putin's dirty war. They blame Kadyrov, the agent of Russia, for involving the Chechens in the war.”

The source added, “The Chechen jihadis in Idlib wish to be part of the Muslim fighters fighting the Russians in Ukraine, or at least to be allowed to fight against the forces of the Syrian regime and its ally Russia in northwest Syria.”

HTS prevents jihadis in general from nearing the fighting fronts with the Syrian government forces in the Idlib region. HTS has, in particular, kept Jund al-Sham fighters away from the fronts so that they would not take any military action without its knowledge.