Abdul Hakim al-Shishani, a veteran of the Chechen-Russian war in the 1990s and commander of the Ajnad al-Kavkaz group fighting Syrian government forces in Latakia, arrived in Ukraine with a group of Chechen fighters to battle Russian forces. 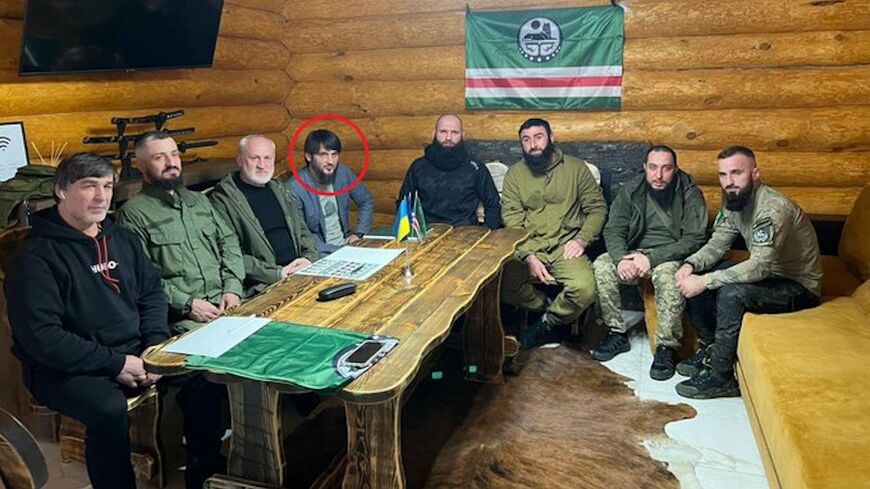 Al-Monitor has learned that the commander and members of Ajnad al-Kavkaz, a Chechen-led Islamic rebel group active in northern Syria, headed to Ukraine to fight against the Russian forces there.

Sources from within jihadist groups in Syria told Al-Monitor that Chechen fighters from Ajnad al-Kavkaz fighting Syrian government forces in the countryside of Latakia recently arrived in Ukraine from Idlib, where they fought the Syrian government alongside the opposition.

The same sources said that more commanders are expected to leave Idlib for Ukraine to escape the crackdown led by Hayat Tahrir al-Sham (HTS), and to seek revenge against Russia and the forces of President Vladimir Putin’s ally, Chechen President Ramzan Kadyrov.

Humam Issa, an Idlib-based journalist, told Al-Monitor, “The Ajnad al-Kavkaz is a moderate, albeit jihadist group that did not interfere with the internal Syrian fighting and did not interfere in the affairs of the Syrian local community. Its main focus was on fighting the Syrian regime forces in the mountains and forests of the countryside of Latakia based on its fighting experience in rugged geographical areas.”

He added, “The group practices no advocacy activity within Syrian society as it does not speak the Arabic language. The group’s forces did, however, play a role in revealing the codes shared among the Russian forces in Syria given their knowledge of this language. These forces have experience in martial arts, in dealing with Russian planes, in digging trenches and in working to prevent Russian airstrikes.”

He continued, “HTS has tightened the noose around this group, especially between 2020 and 2021, as it arrested some leaders close to it. This group included Syrian members and commanders who left the group following the clampdown by HTS. Most of its leaders are now getting ready to go to Ukraine and leave Idlib to escape HTS’ crackdown and to fight the Russian forces in Ukraine.”

Issa said that Abdul Hakim al-Shishani, commander of Ajnad al-Kavkaz, has left Idlib for Ukraine following coordination with military groups from the Chechen Sheikh Mansur Battalion, which is fighting against the Russians alongside Ukrainian forces in Ukraine.

In this regard, a commander in the Ajnad al-Kavkaz group known as Abu Abd al-Rahman al-Shishani told Al-Monitor, “Many of us, especially people who have a track record of problems with HTS leaders, left Syria for Ukraine, as these have recently been subjected to severe harassment on the part of HTS’ leadership. The Russian-Ukrainian war created an opportunity for us to leave Idlib and an opportunity for HTS to get rid of us. The number of Chechens who arrived in Ukraine from Idlib is about 25, most of whom are of Russian and Chechen nationalities.”

He said, “We go to Ukraine to fight the Russians who killed and committed the most heinous crimes against our people in the 1990s. Through Kadyrov, the Russian agent, they (Russian forces) continue to practice violence against every Muslim who shows hostility to Russia, which killed the Syrian people that we came to support.”

He added, “We had hoped to clash with the Russian forces in Syria, but that, unfortunately, did not happen. Russia is fighting in Syria through planes, but in Ukraine, we can confront the Russian army [on the ground]. Every enemy of Russia is a friend of ours. Also, the Ukrainian people are oppressed, and Islam commanded us to support the oppressed, let alone if the oppressor is a common enemy to us.”