What are real reasons behind Russian troop drawdown in Syria?

Russia's strategy behind withdrawing its forces from Syria could include wanting to protect them from escalating danger while winning points with voters. 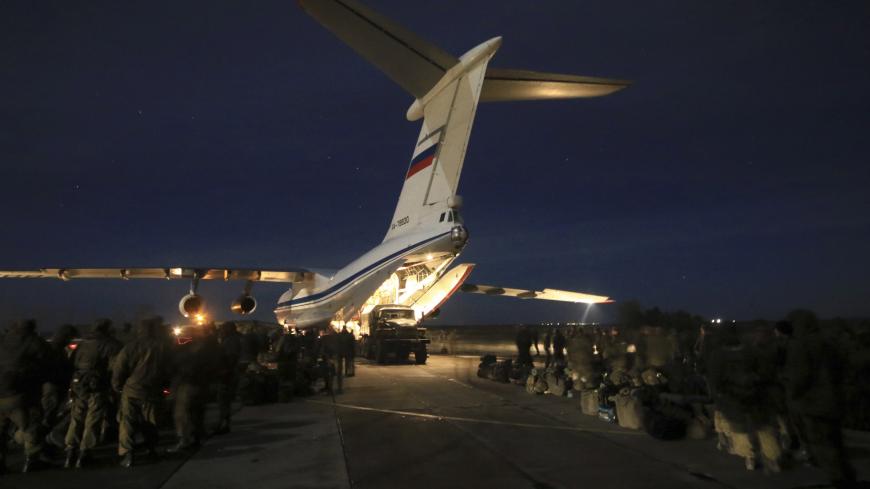 Russian marines, who guarded Russia's Khmeimim air base in Syria, gather next to a plane as they arrive at the Belbek military airport near the Black Sea port of Sevastopol, Crimean Peninsula, Dec. 28, 2015. - REUTERS/Pavel Rebrov

MOSCOW — It might take a Russian chess master to keep track of Russia’s maneuvering of troops in Syria.

Chechen leader Ramzan Kadyrov announced Feb. 10 that a battalion of Russian military police had returned to Chechnya from Aleppo. He said the Chechen capital city of Grozny welcomed the servicemen with a ceremonial rally, and several servicemen received military awards. The battalion had been charged with protecting Russian Defense Ministry facilities and ensuring public order and security for civilians.

"As many as 393 fighters under the command of Maj. Ruslan Numukhajiev returned home safely,” Kadyrov wrote on VK, Russia’s most popular social network. VK has become Kadyrov’s primary means of public outreach since his Instagram and Facebook accounts were blocked in December because of US sanctions.

The returning force, composed predominantly of ethnic Chechens, had been stationed in Syria since December 2016.

In March, Chechnya saw a similar reception when a military police battalion returned after three months in Aleppo. Back then, as now, Kadyrov praised the servicemen for successfully completing their duties. In April, a new military police battalion from Chechnya went to Syria for a scheduled five-month tour and — as there have been no reports of that battalion returning — it could be the one that just arrived back from Aleppo. As with many militaries, Russia's is sometimes tight-lipped about such schedules.

Still another military police battalion, from Russia’s Southern Military Command, was commissioned to Syria in May; it was among the first to return after Russian President Vladimir Putin announced in December that Russia was withdrawing forces. The personnel had been tasked with preserving the cease-fire plan in de-escalation zones and providing security for civilians and humanitarian aid deliveries.

While Russian military experts debate whether the just-returned military police were stationed only in Aleppo or also in Khmeimim and Tartus to safeguard the two Russian military facilities, the conventional wisdom among them is that Chechen military police hadn’t participated in combat. Instead, as Al-Monitor reported a year ago, the units were tasked with the important missions of patrolling streets in areas cleared of the Islamic State (IS) and providing security escorts for humanitarian goods in transit. They also provided "security for the Sunni population, which occasionally experienced raids from Shiite militant groups.” That last task was supposed to signal that Russia wasn’t “setting Sunni residents adrift,” and it probably didn't sit well with the pro-Iranian militias.

The December drawdown announcement occurred shortly after a surge of violence in Syria, raising rumors that the withdrawal was motivated by a rising risk to the Russian military. The Conflict Intelligence Team, an independent investigative group, reported Feb. 12 that at least five Russian private military contractors from Wagner Group were killed in the US strike Feb. 7 on the pro-regime group in Deir ez-Zor. The strikes by Israel on Syria that followed soon after triggered serious concerns in Moscow, with the Foreign Ministry saying explicitly, “Creating threats to [the lives] and security of Russian service personnel who are in the Syrian Arab Republic … [is] absolutely unacceptable.”

A source in the Russian military who spoke with Al-Monitor on condition of anonymity dismissed speculation about the timing, saying, "The pullout [of the military police forces] had been planned long before all those attacks and has nothing to do with them.”

He added, “The situation in the areas that the [military] police used to patrol is different today than it was in mid-2017 and requires a different type of political and security management. It’s just that; it in no way means Russia is retreating.”

Interestingly, just before he announced the Chechen police force had returned, Kadyrov said Chechnya had sent two truckloads of humanitarian aid to Deir ez-Zor — a move he said was Russia’s first humanitarian action toward the city since it was liberated from IS in November. Last week, Chechnya also sent 11 tons of wheat and 10,000 blankets and jackets for children and adults in various Syrian cities. Kadyrov said he would soon send ambulances to Syria so that people in distant areas can receive medical aid. He has made other moves in Syria, such as restoring damaged mosques and rescuing and returning to Russia children whose parents took them to Syria and then abandoned them to join terrorist groups. All together, these actions appear to follow a new track he is exploiting in post-war Syria. The track seems to be in line both with his personal ambition in the Middle East and Russia’s objective of spearheading the political settlement process and leading humanitarian and restoration efforts.

Pulling the military police out is also in line with the general withdrawal of the Russian forces: It’s important to show that the troops are back home with a victory — and to get that message across loud and clear in time for the March presidential election. That doesn’t necessarily change Russia's calculations for Syria, be they military or political, but the math is getting more complicated with each day that passes.