Much ado in the Mideast: 3 theories on Russia’s Syria trips

Russia’s calendar has been packed with official trips to and from the Middle East, raising speculation about new military developments in Syria. 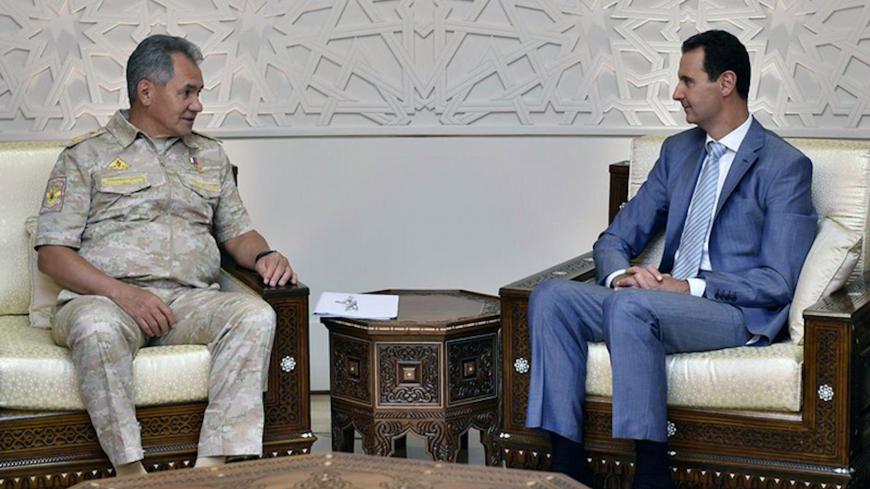 MOSCOW — Russia has been busy. Really busy. The past couple of weeks have arguably been the country’s most bustling period on the Middle East track:

All this activity provides plenty of food for thought on what Russia is up to in the Middle East. What made Shoigu’s Syria visit exceptional among this flurry of events was that its secrecy was strictly guarded — the public and the press only learned about the visit after Shoigu had already spoken with Syrian President Bashar al-Assad.

The Russian Defense Ministry later issued a five-line statement saying Shoigu and Assad discussed their “military and technical cooperation … to eliminate the [Islamic State (IS)] in Syria.”

Other matters they discussed, the statement said, included stabilizing Syria, the functioning of de-escalation zones and ensuring humanitarian aid to civilians. Assad’s office added that the meeting focused on recapturing Deir ez-Zor from IS and strengthening “efforts to combat terrorism in all Syrian territory until its utter annihilation."

Several days after the meeting, experts and policymakers are still unsure what to make of the visit and whether there’s a big new Russian move behind it that would shake up the dynamics in Syria. There are a number of potential explanations at this point that can be roughly packaged into the three following theories.

First, the visit had symbolic meanings. Moscow wanted to send a message — loud and clear — to Assad and the rest of the world that even though the Syrian president has made the Kremlin uneasy on occasion, it still sees him as the sole legitimate leader of Syria and the commander in chief to be taken seriously. Others in the Russian expert community see another symbol in Shoigu’s visit: The presence of the top Russian general was meant to boost the morale of Syrian troops battling IS for Deir ez-Zor with Russian air cover, and to mark a key milestone of what Shoigu himself called in August “an end in the Syrian civil war,” with more focus placed on the fight against IS.

A second theory suggests that as the top Russian military man, Shoigu came to Syria to inspect the state of affairs within the Russian forces themselves. A source close to Russian diplomatic circles who spoke with Al-Monitor not for attribution said, “In recent weeks Russians have suffered big losses. Besides, there are some internal army proceedings that Shoigu needed to fix.” The source gave no details.

Andrei Frolov, a military analyst and editor-in-chief of the Russian journal Eksport Vooruzheny (Arms Export), told Al-Monitor it’s normal for the head of the Defense Ministry “to inspect his country’s forces and meet with the leader of a foreign country where the troops are fighting — especially since he hasn’t been there in a long time.” Indeed, the last time Shoigu visited Syria to meet with Assad and inspect the Khmeimim airbase was in June 2016.

The third theory — the one most discussed and most intelligent — is that Shoigu was there to discuss the presence of Russian military police in the Idlib de-escalation zone — an issue Moscow hoped to nail down in Sept. 14-15 talks in Astana, Kazakhstan. No sooner was the Shoigu-Assad meeting made public than the Russian expert community speculated that Russian military police had been stationed at some of the area’s checkpoints. Frolov, however, dismissed this theory: “In order to get a few policemen stationed across Idlib, there was absolutely no need for a military official the level of Shoigu to come over. This could easily be done on the ground without his personal involvement.”

Frolov points to another issue, raised by the French journal Intelligence Online a while ago, about the dispute between Lt. Gen. Sergei Rudskoy, chief of the Russian Defense Ministry’s Main Operational Directorate, and Quds Force commander Maj. Gen. Qasem Soleimani. The alleged dispute was over the future composition of the Syrian armed forces. “I believe the talks over the future of Syria are coming up to the highest levels now,” — said Frolov, who said this argument was among potential issues on the agenda during Shoigu's visit.

Another Russian source with rare insight to the Shoigu-Assad meeting told Al-Monitor on condition of anonymity that the meeting was, among other things, about “ensuring that Iranians [and their affiliates] do not come closer than 40 kilometers [25 miles] to the border with Jordan and Israel — otherwise it would continue to trigger Israeli bombing campaigns.” The most important issue on the agenda, according to the source, was “whether Russians should cross the Euphrates River amid [rumored] US warnings that it would bomb Syrian [regime] and pro-Iranian forces if they do.” The United States is supporting the Syrian Democratic Forces, a Kurdish-Arab alliance that opposes the regime, as they advance toward Deir ez-Zor in an effort to capture the Euphrates River valley. So far, Russian and American flights have been operating in very close proximity over the skies of Deir ez-Zor.

“There’s an understanding that in order to [seize Deir ez-Zor] successfully, Russians have to start bombing to the north of the Euphrates River, but Moscow is still hesitant to do it and I am not sure they reached any decision at the meeting,” he added.

Two retired Russian military men who usually share their insights on Russian policies in Syria with Al-Monitor declined to comment on this visit, with one saying he “wouldn’t want to speculate on such a sensitive issue” and the other suggesting that “we will soon see the results of the talks — whatever they are — on the battlefield.”