Intel: What was Russia’s defense minister doing in Syria? 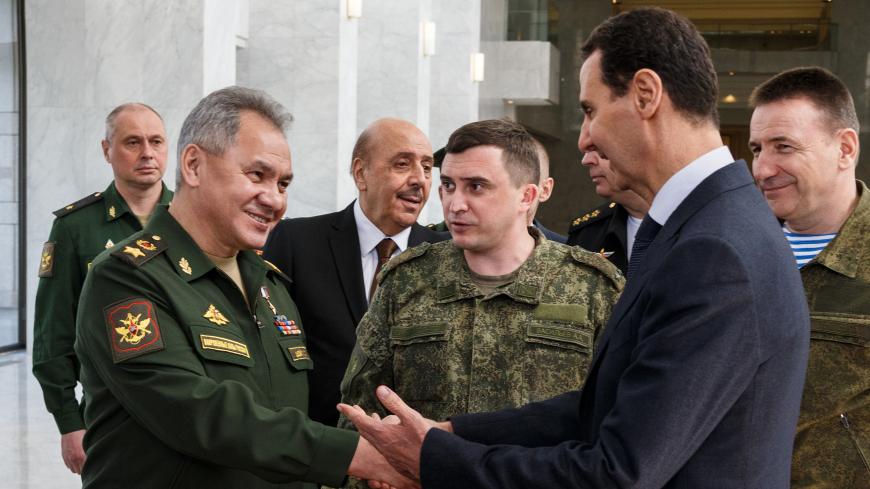 The official readout of the meeting states that the Russian military leader traveled to Syria “on President Putin’s instructions.”

Shoigu last visited Damascus about a year ago, on March 19, 2019. At that time, he was said to have been delivering “a message from Putin” to Assad.

Why it matters: On March 20, Putin and Assad held a telephone conversation dominated by discussion of Idlib, the Syrian Constitutional Committee and humanitarian assistance. The Russian leader congratulated his Syrian counterpart on the occasion of the Muslim holiday of Isra and Miraj.

In the meeting between the Syrian president and the Russian defense minister, the issue of implementing Russian-Turkish agreements on the Idlib de-escalation zone took center stage. Other issues on the agenda included bilateral military cooperation between Moscow and Damascus as well as Russian relief for what the Defense Ministry called the “Syrian people suffering from Western sanctions.”

New challenges: Shoigu’s visit took place the day after Damascus reported the first case of COVID-19 in Syria. The news triggered discussions among Russia observers about the types of challenges an outbreak might create. Some noted the possibility of it impacting the geography of deployments and freedom of movement of the Russian military and protocols of contact between Russian service members and their Syrian, Iranian and Turkish peers.

Others focused on the dynamics in Idlib in light of the pandemic. Turkey could be expected to shut down its border to refugees, for fear of the further spread of the novel coronavirus, and do so without criticism from the West given that states there are doing the same to protect their own populations.

The Russian military analyst Alexey Leonkov asserts that the Russian Defense Ministry “has the situation under control.” “[Russia] recently had military exercises in relation to the coronavirus,” Leonkov said. “The nuclear-biological-chemical (NBS) defense troops focus on such threats. In Tartus and other places that have a presence of Russian troops, all the necessary precautions are being taken. No [potentially] contaminated serviceman will be allowed back into Russia.”

What’s next? Putin invested a lot of political capital in his deal with Erdogan on Idlib, so he wants to make sure Assad doesn't torpedo it. Shoigu’s mission appears to be to provide the necessary reassurances to Moscow's Syrian ally that the agreement with Ankara does not mean Moscow is throwing Damascus under the bus. Assad, however, needs to do some homework of his own to preserve the deal, if only for the sake of the Russian enterprise concerning Idlib.

Shoigu also mentioned Moscow's willingness to provide assistance to jump-start Syria’s economic recovery “with the help of Russian specialists,” so the coming weeks will be telling in what exactly Moscow has in mind.

Know more: See Al-Monitor for more on how Moscow factored the coronavirus pandemic into its decision to break with OPEC+ producers. Also take a look at Week in Review to find out how the coronavirus is bringing Israelis and Palestinians together.