On April 1, Russian President Vladimir Putin held a phone conversation with his Turkish counterpart Recep Tayyip Erdogan to discuss potential cooperation in tackling the COVID-19 pandemic, the next steps in joint efforts in Syria as well as the developments in Libya. 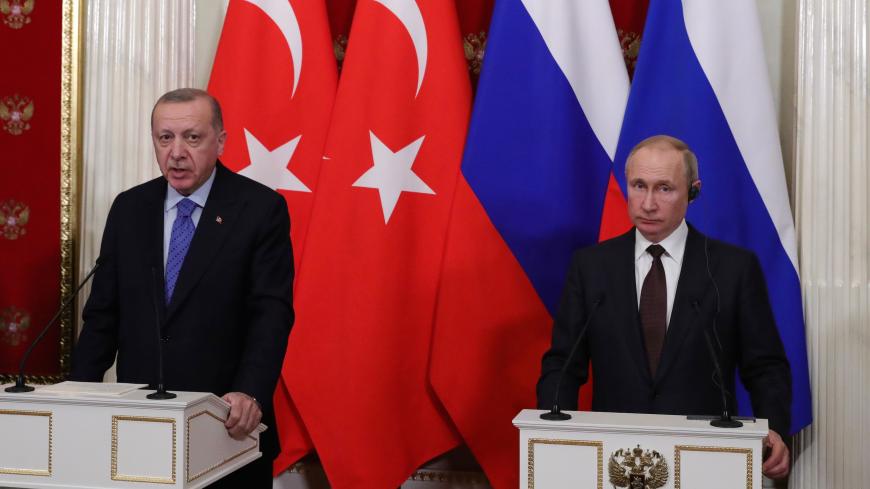 On April 1, Russian President Vladimir Putin held a phone conversation with his Turkish counterpart Recep Tayyip Erdogan to discuss potential cooperation in tackling the COVID-19 pandemic, the next steps in joint efforts in Syria as well as the developments in Libya.

Why it matters? As Al-Monitor reported earlier, Shoigu and Assad also discussed the situation in Idlib and the coronavirus crisis. The Putin-Erdogan negotiated truce for Idlib has been holding up so far but remains rather fragile. Russia now expects Turkey to deliver on its commitments to separate the moderate Syrian opposition from the terrorists of the Hayat Tahrir al-Sham group. Russian military sources told Al-Monitor this week that Ankara might be preparing for a limited operation against the extremists in Idlib.

The coronavirus pandemic is yet another issue that keeps both presidents busy these days. Both need to demonstrate to their constituencies that they can manage it effectively. Both have received domestic criticism that their actions to combat COVID-19 have left a lot to be desired. For Putin, who concentrated some of Russia's coronavirus efforts on the foreign policy front, international contacts — be they with Turkey’s Erdogan, America’s Donald Trump, China’s Xi Jinping or Italy’s Giuseppe Conte — are an important marker of international leadership success. Hence, the special attention Putin drew to the safe return of Russians, stuck in Turkey, back home.

In turn, Syrian President Bashar al-Assad had a phone conversation March 27 with Sheikh Mohammed bin Zayed Al Nahyan, the crown prince of Abu Dhabi, who is also deputy supreme commander of the United Arab Emirates' armed forces. While the two also focused on the joint fight of the coronavirus, the very call and the subsequent reaction to it made many in Moscow conclude the sheikh's reach-out to Assad is a continuation of the UAE's engagement with Russia on a number of issues and areas that challenge Turkey’s own interests, including in Libya.

What’s next? Some analysts in Moscow said they thought that it is important for Erdogan to receive some guarantees from Putin that Assad is not going to take advantage of the situation with the coronavirus and push Turkey farther out from Idlib. Should this happen, Erdogan may get a triple blow: the epidemic, the economic turmoil and defeat in Syria.

At this point, however, Russia doesn’t seem to be interested in exacerbating the situation with Turkey — an important regional player whom it would like to see as a partner. Apart from being focused on its own challenges vis-a-vis the coronavirus, Putin is very much concerned with the drop in oil prices and has to figure out ways to mend ties with the Saudis.

Know more: Check out this story on how COVID-19 is changing the Astana trio’s dynamics in Syria and this take on how Turkey imposed its own first curfew amid the surge of coronavirus infection.

Ezgi Akin contributed to this story