Where the Russia-Turkey deal leaves players on the ground

The initial glow of the Putin-Erdogan deal has faded, and the parties are now in for some on-the-ground challenges. 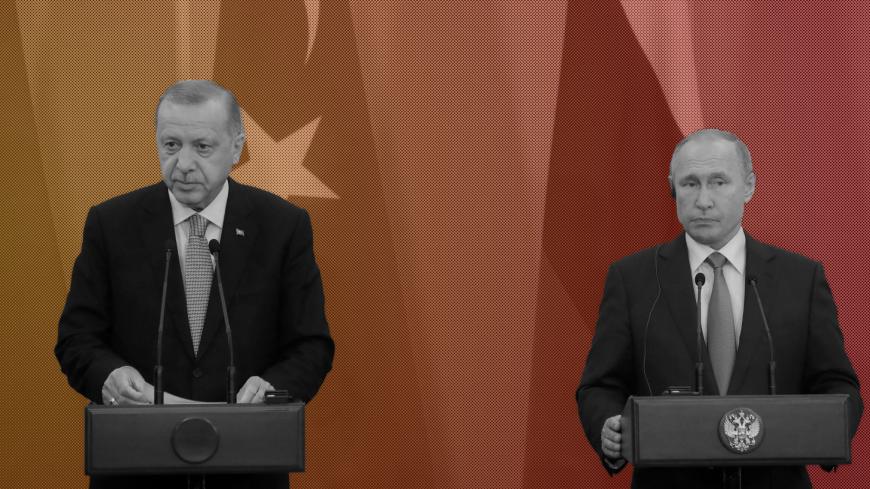 On Oct. 29, Russian Defense Minister Sergei Shoigu informed his Turkish counterpart about the earlier-than-expected withdrawal of Kurdish armed groups from the 30 kilometer security zone along the Syrian-Turkish border. “Both Syrian border guards and Russian military police have entered the area,” Shoigu said. The next day, however, Shoigu conceded that implementation of the Russian-Turkish memorandum on Syria signed Oct. 22 by Russian President Vladimir Putin and Turkish President Recep Tayyip Erdogan in Sochi faced some challenges.

Shoigu did not specify what kind of difficulties the parties were experiencing, but just before Russian and Turkish troops met up at the Darbasiyah border crossing in Hasakah province, the zone had been assaulted by Turkish artillery, with Syrian TV reporting that six people had been injured due to the shelling. Russia’s Reconciliation Center for the Opposing Sides Parties in the Syria Arab Republic later refuted this narrative, asserting that an unidentified party had detonated an explosive and calling the incident a “provocation.” Moreover, despite a cease-fire, occasional clashes continued between the Turkey-supported Syrian National Army (SNA) and Syrian government forces and between the SNA and Kurdish fighters.

The next stage of the Sochi agreement envisages joint Russian-Turkish patrolling of a 10-kilometer area on the Syrian side of the Syria-Turkey border. At the same time, Erdogan warned that Ankara might launch a new campaign against the Syrian Kurds if Russia fails to implement the provisions of the Sochi agreement. His statement most likely stemmed from a domestic requirement to appear tough.

One of the outcomes of the Sochi deal is an extension of Russian-Turkish cooperation — initially conceived within the Astana peace talks framework — onto the eastern bank of the Euphrates and using it to implement the Adana Agreement. An added benefit for Moscow is that the Adana angle deflects attention from the issue of Turkey's very presence in Syria, whose territory Russia had intervened to defend.

Although the Syrian army was able to deploy into areas adjacent to the border with Turkey, thinking that this will create a foundation for direct cooperation between Damascus and Ankara is a stretch. In addition, it is too early to expect the return of Baathist authority to the locations where Syrian border guards are deployed. The guards are merely patrolling the area with an eye toward facilitating the relocation of Turkey-based refugees to the region. This raises the issue of the extent to which Russian-Turkish cooperation meets the needs and requirements of Damascus.

After the six-hour talks in Sochi with Erdogan, Putin informed Syrian President Bashar al-Assad about the key provisions of their agreement. Of note, shortly before the meeting convened, Assad had paid a demonstrative visit to the frontline positions of government forces in Idlib province. Russian media read this as a signal that if the memorandum ignored the situation in the province, which remains under Turkish patronage, Damascus would have the final say and move to liberate Idlib.

“The Turks did not abide by this agreement [that Putin and Erdogan negotiated on Idlib in September 2018.], but we are liberating Idlib,” Assad told Al-Sourea and Al-Ikhbariya television in an Oct. 31 interview. “There was a delay for a year; the political process, the political dialogue, and various attempts were given an opportunity to drive the terrorists out. All possibilities were exhausted. In the end, we liberated areas gradually through military operations. The same will apply in the northern region after exhausting all political options.”

In Assad’s thinking in regard to Russia’s response to Turkey's Operation Peace Spring and subsequent dealings with Ankara, certain outcomes on the ground might have been different had Moscow focused on expanding militarily into Idlib and Deir ez-Zor instead of assuming a mediating role between the Turks and the Kurds. In particular, the Russians would have been able to expand control deeper into eastern areas and could have reinforced their and Assad's negotiating position vis-à-vis Ankara had they chosen to increase their military presence in Idlib, which would have provided them leverage. As events evolved, however, the Turkey-allied SNA has received additional territorial and strategic resources stemming from having been given areas to control. In addition, the United States continues to control oil fields in the east, and some tribes and Kurdish groups remain under US influence with supplies being transferred to them by Washington through Iraqi Kurdistan.

As Al-Monitor previously reported, the Syrian regime is ready to turn conflicting interests between its allies to its own benefit, although it primarily has to act within the boundaries created by Russia. Within these boundaries are leaving the opposition in control of territory and the recent convening of the Constitutional Committee. Conceding to an opposition presence permits Russia to both exert pressure on Damascus while also allowing it to appear to be flexible, while the committee's convening reflects a supposed willingness to compromise, rather than representing a vehicle for Assad’s legitimization.

On these points, Assad cannot criticize the Russian position. In the Al-Sourea and Al-Ikhbariya interview, he even called the deal between Putin and Erdogan a good agreement. He remarked, “Through this agreement, the Russians reigned in the Turks, outmaneuvered the Americans and aborted the call for internationalization which was proposed by the Germans. That is why this agreement is a positive step. It does not achieve everything, in the sense that it will not pressure the Turks to leave immediately. However, it limits the damage and paves the way for the liberation of this region in the future, or the immediate future, as we hope.”

The pro-regime forces rapid filling of the vacuum left by the Kurdish and US withdrawals indeed strengthened Russia’s position as a mediator and Damascus’ hand. The Syrian government might try to take advantage of the situation to draw Russia deeper into the east in filling the vacuum. Also, if Moscow manages to implement its “reconciliation” scenario of integrating former SDF factions into Assad's forces, it would allow Russia to claim to be blocking the spread of Iranian influence and thus attract investments from the Gulf states for Syria's reconstruction. A different scenario, however, could see Russia sharing responsibility for eastern Syria with Iran if Tehran agrees to maintaining the status quo and forgoing actively provoking Israel into taking military action.

Throughout October, the Russian military engineers engaged in reconstructing a metal bridge to provide the western and eastern banks of the Euphrates with supplies and to deploy additional troops in the area. Considering the experience of Russian “volunteer soldiers” and other pro-regime forces being killed in US airstrikes during their attempted forceful takeover of oil fields in 2018, a direct confrontation pitting the United States against Russia or Iran is unlikely. The pro-regime forces can only hope that what remains of the American presence and SDF soon disappears, and the tribes in eastern Syria currently protesting against the entrance of the Syrian army agree to shift to regime patronage.