Qatar has appointed an ambassador to Egypt, for the first time since reconciliation efforts started between the two countries earlier this year, setting the stage for better relations with Cairo in the coming period. 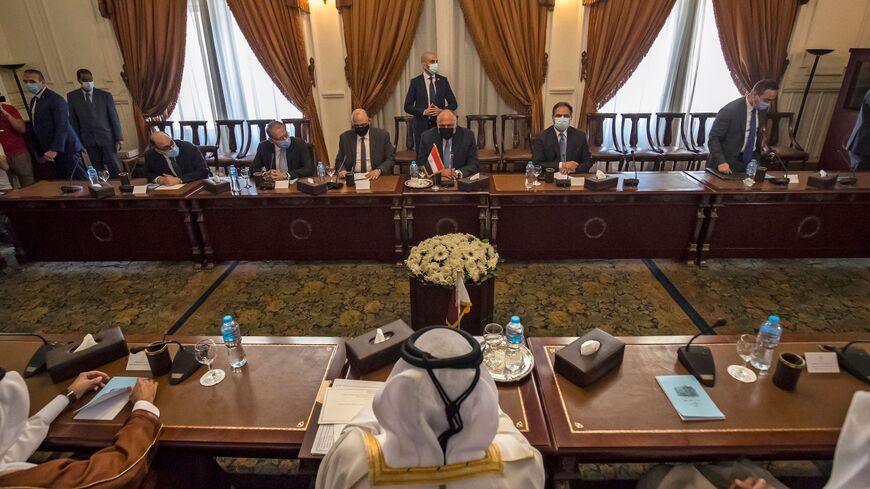 Egyptian Foreign Minister Sameh Shoukry meets with his Qatari counterpart Mohammed bin Abdulrahman Al-Thani at Tahrir Palace in the center of the capital Cairo, on May 25, 2021. - KHALED DESOUKI/AFP via Getty Images

CAIRO — Qatar has appointed a new ambassador to Egypt, taking another step closer to the Arab country.

The July 29 move by Qatari Emir Tamim bin Hamad Al Thani brings Qatari diplomatic representation back to Cairo, for the first time since the two countries agreed to mend fences in Saudi Arabia early this year.

The unfolding Egyptian-Qatari detente is part of a larger reconciliation process between Qatar and what came to be known as the Arab Quartet, which also contains — apart from Egypt — Saudi Arabia, the United Arab Emirates and Bahrain.

The four countries severed diplomatic and trade ties with Qatar in June 2017 in protest of Qatari interference in their internal affairs and its support of political Islam, especially the Muslim Brotherhood, the movement of Egypt's late Islamist President Mohammed Morsi, which has several ideological offshoots in the Arab Peninsula and North Africa.

Beneath the severing of relations lay the ideological alliances that were forming in the region at the time, with Qatar joining Turkey, another state sponsor of the Muslim Brotherhood, against the regional anti-political Islam bloc.

Qatari political analysts believe that the appointment of an ambassador in Egypt will increase communication with Cairo and contribute to solving some of the issues between the two countries.

"The appointment of a Qatari ambassador in Egypt shows that relations between the two countries are moving on the right track," Qatari political analyst Jaber al-Harmi told Al-Monitor. "It also shows the presence of a common ground between them." He expects Egyptian President Abdel Fattah al-Sisi and Emir Tamim to meet soon.

The appointment of an ambassador to Egypt by Qatar comes only a month after Sisi appointed an ambassador to Doha. Delegations from the two countries have met to discuss contentious issues between them, including Qatari interference in Egyptian affairs, Qatari support for the Muslim Brotherhood and Qatari media attacks against Egypt.

Relations between the two countries turned sour with the uprising against Morsi in Egypt in mid-2013.

Cairo accuses Qatari media outlets including the news station Al Jazeera to dwelling on negatives in their extensive coverage of Egyptian affairs.

Al Jazeera is also accused of becoming a platform for Muslim Brotherhood and Egyptian secular opposition figures who had fled Egypt following the downfall of the Morsi regime and sought refuge in Qatar.

Qatar also opposed Egypt's positions in regional hotspots such as Libya, the eastern Mediterranean and Africa.

Nevertheless, a change of heart is apparently happening in Doha.

He described the Arab country as a "leading" power in the region and the Egyptian government as a "legitimate" one that was elected by the Egyptian people, bucking a trend by Qatari and Qatar-sponsored media outlets of describing Sisi's government as one that came to power through a "military coup."

Analysts say the reconciliation measures between Cairo and Doha are a small detail in the larger picture of efforts by the Arab Quartet to draw Qatar away from the Turkish and Iranian orbits.

"Iran and Turkey are a growing threat to the security of the four states, especially with the two countries using political groups and militias affiliated with them in destabilizing these states," international relations researcher Mohamed Rabie al-Dehi told Al-Monitor.

Doha solidified its relations with both Turkey and Iran even more soon after Saudi Arabia, the UAE and Bahrain closed their shared borders with Qatar and blocked their airspaces to Qatari planes. Qatari relations with the two countries went beyond the economic to military cooperation, including the construction of a Turkish military base in Qatar, bringing the Turkish army to the Arab Peninsula for the first time in years and very close to the borders of Saudi Arabia, the UAE and Bahrain.

"The presence of Turkish troops in Qatar is a direct threat to security in the Gulf region," al-Dehi said. "This is especially clear with Turkey having ambitions to increase its influence in the region."

Much more worrying were the Qatari-Iranian ties, with predominantly Shiite Iran standing opposite predominantly Sunni Saudi Arabia, which considers Iran and its growing influence in a number of regional states a direct threat to its security.

Egypt is also worried about growing Iranian influence in the region, especially in Yemen, where the presence of the Iran-backed Houthi militia near the Red Sea and the Bab el-Mandeb Strait threatens navigation in the southern entrance of the sea and consequently the Suez Canal, a backbone of the Egyptian economy.

Egypt, which brought the Brotherhood down and outlawed it in 2014, is a major driving force against this Islamist movement and political Islam in general.

Qatar, on the other hand, may find it hard to relinquish support for the political current after having invested so heavily in it.

The gap between the two sides on this issue is clear in the position each has adopted toward ongoing developments in Tunisia, the epicenter of the Arab Spring where the fortunes of the Muslim Brotherhood were reversed on July 25.

On that day, Tunisia's President Kais Saied dissolved his country's Brotherhood-dominated parliament and sacked the cabinet, shattering 11 years of political gains by the Islamist movement in Tunisia.

Egypt's position is becoming direct support for Saied, while Qatar is pushing for dialogue between the Tunisian president and his country's political forces, including Ennahda, known as the Muslim Brotherhood's party in Tunisia.

The Qatari press has already started softening its criticism of Sisi's government. However, Qatar continues to provide refuge to hundreds of Muslim Brotherhood and Islamist figures wanted by Cairo.

"I believe the handover of these figures to Egypt … will take time for the two countries to reach consensus on," Mohamed al-Rashidi, a member of the Committee on Foreign Relations in the Egyptian Senate, told Al-Monitor. "Egypt is primarily interested in stopping Qatari interference in its affairs as well as incitement by Qatari media against it and I think some progress is happening in the two areas."