Egypt-Qatar relations have been improving in recent months, with the two countries settling most disputes that marred their relationship since 2013. 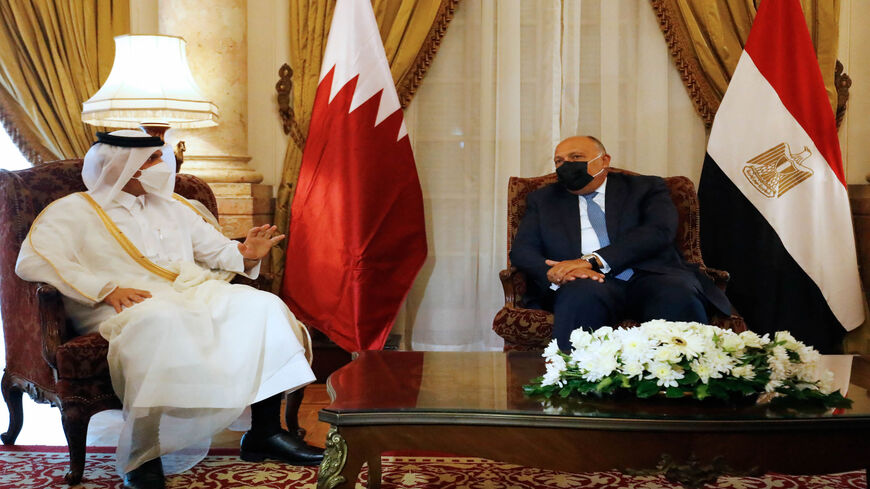 In a new sign of improving relations with Qatar, Egypt’s Foreign Minister Sameh Shoukry said June 12 that Cairo is burying the hatchet with Doha, amid rapprochement between the two Arab countries after years of political rift.

“We are working to turn the past page and remove the negative aspects resulting from the boycott of Qatar in order to put relations back to their normal pace in order to achieve interest, enhance security and strengthen ties with the Arab brothers,” Shoukry said in an interview with the local Sada Al-Balad TV.

He continued, “Egypt is proceeding carefully to assess the extent to which it has benefited from the return of relations with Qatar, with the aim of moving to another degree of restoring relations at a steady pace."

The boycott was an escalation of growing tension between Egypt and Doha following the overthrow of Muslim Brotherhood President Mohammed Morsi in 2013. Qatar was a main backer of the Muslim Brotherhood and offered refuge to hundreds of members of the Islamist movement, which Egypt blacklisted in 2013.

Tension, however, began to ease between the two countries at the beginning of this year following the signing of a reconciliation agreement in January during the Gulf Cooperation Council summit in Saudi Arabia. The same month, Egypt announced that its diplomatic relations with Qatar have been restored.

The improvement in relations between Egypt and Qatar culminated in a visit by Qatari Foreign Minister Mohammed bin Abdulrahman Al Thani to Cairo May 25 for talks on bilateral relations. The top diplomat met with President Abdel Fattah al-Sisi and conveyed an invitation from Qatari Emir Tamim bin Hamad Al Thani to visit Qatar.

Three days later, the Qatari foreign minister said in a TV interview that Sisi represents the elected legitimacy in Egypt. “Our relationship with Egypt has gone through many stages of tension, but there was a minimum level of relationship maintained even during the crisis — whether in terms of not touching Qatari investments or facilitating the stay of Qatari students in Egypt. And this was appreciated by Qatar,” he told the London-based Al Araby TV.

He said, “When the page of the dispute with the Gulf and Egypt was turned, Qatar looked forward to joint work with Egypt, and we do not have many pending files with Cairo.”

As the two countries pushed to rebuild their fractured ties, Shoukry visited Doha July 13 to convey a message from Sisi to the Qatari ruler on the positive developments of relations between the two countries, according to a statement issued by the Egyptian Foreign Ministry. Sisi also invited the emir to visit Egypt soon.

Egypt’s chief diplomat also appeared on the Qatar-funded Al Jazeera TV network for the first time in years. Al Jazeera coverage of the Egyptian affairs had been among the issues of dispute between the two countries.

“My visit to Doha reflects the political will of both Egypt and Qatar to turn the page of the past and explore horizons of cooperation to serve the good of the two peoples,” Shoukry told Al Jazeera.

The same message was confirmed by the Qatari foreign minister following an extraordinary meeting of the Arab League to discuss the Nile dam dispute between Egypt, Sudan and Ethiopia. “There is a mutual desire by the two countries to upgrade bilateral relations and for the return of brotherly ties,” the Qatari foreign minister said during a press conference after the meeting. "We are looking forward to having firm steps toward improving ties."

Ezzat Saad, head of the Egyptian Council for Foreign Affairs, said the relationship between Egypt and Qatar has taken a positive turn over the past months. “The leadership of the two countries are aware of the importance of having a healthy relationship,” Saad told Al-Monitor over the phone, expecting further improvement in relations between the two sides in the coming period.

In regard to the issue of the Muslim Brotherhood members living in Qatar, Saad noted that it is premature to reach a conclusion about how Qatar will deal with this file. “However, the recent experience of cooperation between Egypt and Qatar on the recent conflict in the Gaza Strip gives an encouraging sign about a possible successful cooperation on this file.”

Mokhtar Ghobashi, deputy director of the Arab Center for Political and Strategic Studies, said the Egyptian-Qatari rift has played into the hands of regional rivals Turkey and Iran. “Qatar is part of the Arab national security and it is better to keep it within the Arab fold than leaving it to fall prey to Iran and Turkey,” he told Al-Monitor.

He said that as soon as the rift between Qatar and its neighbors broke out, Ankara sent Turkish soldiers to Doha and bolstered its military presence in the Gulf state. “Iran also opened three ports to export foodstuff to Qatar and allowed Qatari flights to fly through its airspace in return for $100 million annually.”

Ghobashi believes that both Cairo and Doha will be able to settle their dispute, including the issue of the Muslim Brotherhood.

“Many issues are up for discussion between the two sides without preconditions. I think the Brotherhood issue will be discussed as it causes annoyance in Egypt — something that Doha can deal with by taking some measures to restrict the activities of the Brotherhood members, whether in Qatar or elsewhere.”