Egypt’s iconic Cairo Tower lit up with Qatar’s flag colors, in the latest sign of warming relations between the two countries after years of political rift. 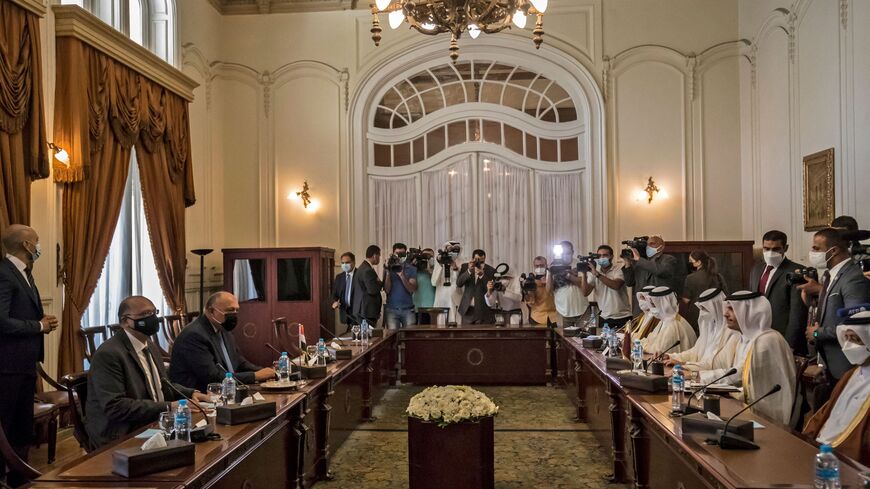 Egypt’s iconic Cairo Tower lit up in maroon Dec. 18 to celebrate Qatar’s National Day, in the latest sign of improving relations between the two countries after years of political rift.

A video published by the Qatari Embassy in Cairo showed the famed Nile-side landmark lit up with the Gulf state’s flag colors with an illumination reading in Arabic “The National Day of the State of Qatar.”

Hani Shawki, director of public relations at Cairo Tower, said the Qatari Embassy requested to illuminate the iconic tower with Qatar’s flag colors in celebration of the country’s national occasion.

It is the first time Egypt has lighted the landmark in central Cairo to celebrate Qatar’s National Day, which marks the unification of the Gulf nation in 1878 under Sheikh Jassim bin Mohammed Al Thani. The occasion has been celebrated every year since 2007.

“This is an Egyptian message that Egypt has turned the page of discord with Qatar,” Hussein Haridy, a former assistant foreign minister for Arab affairs, told Al-Monitor. “It also shows that Cairo has opened a new page in its relationship with Doha.”

Egypt’s relations with Qatar deteriorated following the overthrow of Muslim Brotherhood president Mohamed Morsi in 2013. Qatar was a main backer of the Brotherhood and offered refuge to hundreds of members of the Islamist movement, which Egypt blacklisted in 2013.

Relations between the two countries nosedived further in 2017 when Egypt joined Saudi Arabia, the United Arab Emirates and Bahrain in severing diplomatic and trade relations with Qatar, accusing Doha of supporting terrorist groups, an accusation vehemently denied by Qatar.

The relationship began to improve earlier this year after the two countries signed a reconciliation agreement during the Gulf Cooperation Council summit in al-Ula, Saudi Arabia, in January.

The improvement in Egyptian-Qatari relations culminated in August with the mutual appointment of ambassadors. In the same month, Sisi and Tamim also met for the first time during a regional summit in Iraq.

Haridy believes that years of political rift between Egypt and its Gulf allies and Qatar were full of lessons for all sides.

“They all realized that neither previous policies nor the boycott had served their interests,” the former diplomat said. “They all now understand that it’s better for them to manage their disputes through diplomatic channels instead of dragging themselves into confrontations or boycott.”

Last month, Salem Mubarak al-Shafi, the Qatari ambassador in Cairo, said the Egyptian-Qatari relations were moving in the right direction.

“There are serious steps and a mutual desire by both countries to enhance their cooperation, turn the page of the past and overcome the points of differences,” he said.

In the first fruits of the warming relations between the two Arab countries, the state-owned QatarEnergy signed an agreement this month to acquire a 17 percent stake in two Shell-operated concessions in Egypt's Red Sea region.

QatarEnergy chairman and CEO Saad Sherida Al-Kaabi said the deal represents the company’s “entry into the Arab Republic of Egypt’s well-established upstream oil and gas sector and offers an opportunity for the consortium partners to explore this frontier acreage.”

“It did not serve the interests of Egypt or the Gulf to leave Qatar to regional powers like Turkey and Iran,” Mokhtar Ghobashi, deputy director of the Arab Center for Political and Strategic Studies, told Al-Monitor.

He said Qatar is a wealthy nation “that must be kept in the Arab fold and away from the hands of regional competitors.”

On Dec. 12, Egypt and the GCC, of which Qatar is a member, launched a mechanism for political coordination between the two sides.

Speaking in a press conference in Riyadh, Foreign Minister Sameh Shoukry said Egypt was coordinating with the GCC countries on all regional issues. “The security of the Arabian Gulf is an integral part of the security of both Egypt and the Arab world,” he said.

GCC Secretary-General Nayaf bin Al-Hajraf said Egypt is the pillar of security and stability in the region.

“The rift between Egypt and its Gulf allies and Qatar have fractured the GCC and undermined its role,” Ghobashi said.

He continued, “There is an appreciation for Egypt’s weight and its support to the Arab world and the fence-mending between Egypt and Qatar serves in cementing the Gulf role and boosting its role.”