What will 2019 have in store for dysfunctional GCC?

The Gulf Cooperation has essentially been split in, with Qatar, Kuwait and Oman resisting the actions of Saudi Arabia's Mohammed bin Salman and the UAE's Mohammed bin Zayed. 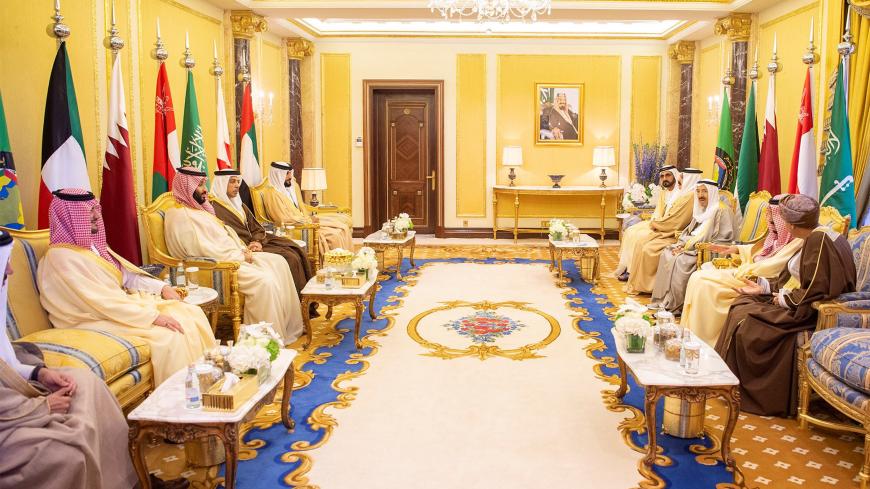 The Gulf Cooperation Council's leaders are seen ahead of their summit meeting in Riyadh, Saudi Arabia, Dec. 9, 2018. - Bandar Algaloud/Courtesy of Saudi Royal Court/Handout via REUTERS

In the aftermath of the 39th summit of the Gulf Cooperation Council (GCC) held in Riyadh earlier this month, the war of narratives behind the Qatar crisis continues. Voices in Doha and the blockading Gulf states are busy portraying the annual meeting’s outcome on entirely different terms. The main message from Doha is that Qatar has successfully escaped the Saudi shadow and that the gas-rich emirate is better off not being allied with Riyadh, Abu Dhabi and Manama. Meanwhile, media outlets in the so-called Anti-Terror Quartet (ATQ) — Bahrain, Egypt, Saudi Arabia and the United Arab Emirates (UAE) — are accusing Qatar of damaging GCC unity and suffering in isolation as a consequence.

Abundantly clear is the fact that although all six GCC members are set to continue cooperating on technocratic levels, the summit did not bring Qatar and the ATQ any closer to resolving the fundamental political and ideological tensions at the heart of the bitter Gulf dispute. Looking ahead, there is no question that in 2019, like 2018, the GCC will remain an ineffectual and toothless institution that falls extremely short of achieving the objectives set out at the subregional institution’s establishment in 1981.

Simply put, the general perception that the Islamic Republic of Iran poses the gravest threat to all six Gulf monarchies has been replaced in Qatar, Kuwait and Oman with a new perception that the Riyadh-Abu Dhabi axis represents a more dangerous menace to these Gulf littoral states than Tehran’s quest to export Ayatollah Ruhollah Khomeini’s revolution to the Arabian Peninsula’s wealthy, pro-Western sheikdoms. Likewise, from the ATQ’s perspective, Qatar deserves to be cast as a regional pariah due to its links with groups that Abu Dhabi and Riyadh classify as terrorist organizations.

The question of Turkey’s role in the GCC’s security architecture is another polarizing issue. Qatar and Kuwait are strengthening their ties with Ankara against the backdrop of the ATQ states’ deteriorating relations with Turkey as the Jamal Khashoggi murder case continues to unfold. To be sure, as intra-GCC divisions come closer to the surface, it is evident that although the Qatar rift is the GCC’s gravest source of internal friction, this 18-month-old dispute is not the only crisis plaguing the group.

In Kuwait, there are growing perceptions that the regional agendas of Saudi Arabia’s Crown Prince Mohammed bin Salman and his Abu Dhabian counterpart Mohammed bin Zayed are destabilizing and threatening to Kuwait’s vital interests. Surrounded by three larger states — Saudi Arabia, Iraq, and Iran — the Kuwaitis are sensitive to regional dynamics that have potential to threaten Kuwait’s national independence and sovereignty. According to interlocutors in the Gulf, in mid-2017 there were fears in Kuwait that if the ATQ’s blockade of Qatar proved successful in terms of forcing Doha to capitulate to Riyadh and Abu Dhabi’s demands for reconciliation, Kuwait was possibly set to become the ATQ’s next target.

Key flashpoints in Kuwait’s relations with Riyadh and Abu Dhabi that may become brighter in 2019 include the oilfields of Wafra and Khafji in the Neutral Zone shared by Kuwait and Saudi Arabia; Kuwait’s relatively liberal, semi-democratic political system that permits a Muslim Brotherhood-affiliated group, Hadas, to function as a legitimate political faction that holds seats in the National Assembly; and the budding Kuwaiti-Turkish partnership. Within this context, the Kuwaitis are hedging their bets and investing in deeper relations not only with Turkey, but also with China and the United Kingdom to decrease the emirate’s vulnerability to potential ambitions on the part of Riyadh and Abu Dhabi to rein in Kuwait. To be sure, President Donald Trump’s initial reaction to the blockade of Qatar in June 2017 prompted Kuwaiti officials to further question the wisdom of maintaining the high level of dependence on Washington as security guarantor, which Kuwait and other GCC states have done since the Gulf crisis of 1990-1991.

Oman, which Riyadh and Abu Dhabi have on numerous occasions criticized for undermining the GCC’s collective security by being close to Iran, sees the Saudi and UAE princes' foreign policy agendas in the Gulf as threatening Muscat’s core interests. As the internationally renowned Omani scholar Abdullah Baabood told Al Jazeera, there is growing frustration among Omanis over perceived Saudi mismanagement and manipulation of the GCC whereby Riyadh has been seen as “basically undermining the whole project of the GCC that has been going on now for decades.”

Doubtless the Yemeni crisis is a major concern from Muscat’s perspective. Saudi Arabia and the UAE’s increasingly militarized presence in eastern Yemen (an area where Oman has historically served as the most influential foreign state) unsettles the sultanate’s leadership against the backdrop of unfounded allegations that Oman has helped Iran transfer weaponry to the Houthis via Omani land and ports.

The 2011 spy scandal in Oman, in which authorities in Muscat accused the UAE of seeking to illegally obtain information about Oman’s government and military, largely informs Omani perceptions of an Emirati threat to the sultanate. There is also growing speculation that the Riyadh-Abu Dhabi axis will seek to play a hand in Oman’s inevitable transition to the post-Sultan Qaboos era, with some analysts raising the specter of the Saudi and Emirati leadership seeking to interfere in the process in order to put a more pro-Riyadh/pro-Abu Dhabi sultan on the throne who would, hypothetically, distance Muscat from Tehran. Yet just as Omanis are keen to avoid meddling in foreign countries’ internal affairs, any outside interference in Oman’s succession process will probably only fuel greater resentment of the Saudi and UAE princes on the part of Omanis and reinforce the notion that a deeper partnership with Tehran serves Muscat’s interests in terms of protecting the sultanate’s independence.

In 2019, odds are good that Kuwait's and Oman’s concerns about Saudi Arabia’s quest to establish itself as the Arabian Peninsula’s hegemon will drive both Kuwait City and Muscat to gain greater autonomy from the Riyadh-Abu Dhabi axis’ orbit of influence. Under such circumstances, it would be more accurate to describe the GCC as split in half, rather than Qatar as being isolated within the group. As hopes for GCC unity in the foreseeable future dim with each passing day, 2019 will be a year in which Kuwait and Oman will have to make difficult decisions about how to best navigate the growing instability that damages the Gulf’s potential to remain a bedrock of stability in the volatile Middle East.