Oman joins the 40-member Islamic Military Alliance to Fight Terrorism, yet still strikes a balance while refusing to distance itself from Iran in order to please Saudi Arabia. 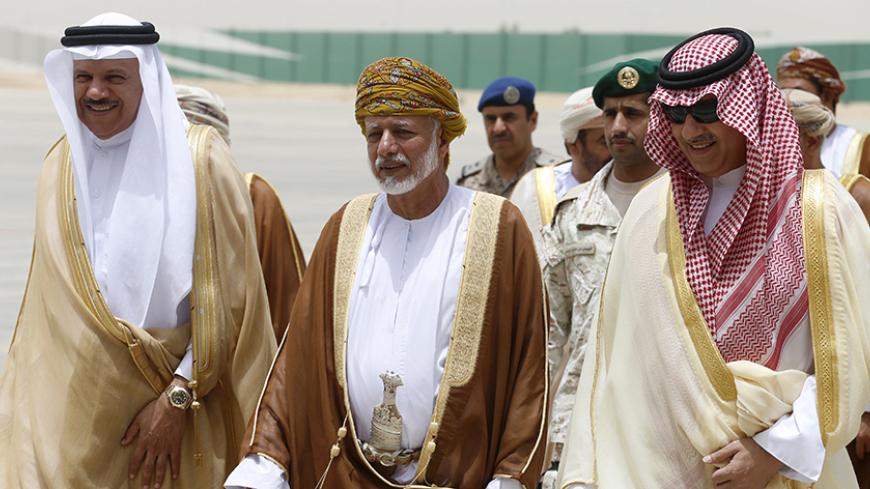 Last year was not altogether kind to the Kingdom of Saudi Arabia. Financial hardships amid an era of cheap oil, Islamic State (IS) attacks on Saudi Arabian soil, a costly quagmire in Yemen and setbacks in Syria have all weakened the kingdom’s position in the region. Despite these challenges, Saudi Arabia has managed to establish a network of Sunni states within the framework of the Islamic Military Alliance to Fight Terrorism (IMAFT). Although the US-backed anti-terror coalition’s purpose is to crush IS, al-Qaeda and other extremists, the notable absence of Iran and Iraq from IMAFT illustrates the members’ geosectarian alignment with Riyadh’s anti-Iran posturing.

Last month, the kingdom scored another victory by bringing in a new member: Oman. For the sultanate, which has traditionally distanced itself from Riyadh’s efforts to isolate Tehran, joining IMAFT raises important questions about Muscat’s foreign policy agenda as Arab Gulf-Iranian tensions escalate. Saudi voices were quick to hail Oman’s decision to become the Saudi-led alliance’s 41st member as a sign of strong Gulf Cooperation Council (GCC) strength and "a new chapter in regional and Muslim unity."

As neighbors and fellow GCC states, Oman and Saudi Arabia have long maintained a close alliance, yet Muscat’s close ties with Iran have created friction in Omani-Saudi relations. By hosting secret talks between American and Iranian officials in Muscat, which led to the historic 2015 Iranian nuclear deal, Omani officials unnerved their Saudi counterparts. More recently, members of the Saudi government have accused Oman, which has thus far maintained neutrality in the Yemen civil war, of permitting weapons smuggling across the Oman-Yemen border into the hands of Houthi fighters — a claim denied by officials in Muscat.

During his tour of GCC states last month, King Salman bin Abdul-Aziz Al Saud's notable exclusion of Oman signaled Riyadh’s disapproval of Muscat’s close ties to Tehran, even if Saudi officials never publicly aired their frustrations with the sultanate. According to a former high-ranking GCC official, some in the council view Oman’s neutrality as "negative neutrality" given that the Saudis and others seek to establish a unified Arab Gulf front against Iran and its regional allies from Lebanon to Yemen.

Oman did not surprise observers of the country’s foreign policy when it avoided joining IMAFT at the alliance’s inception in December 2015. Muscat has never perceived the Islamic Republic as an existential threat and has often refused to toe Riyadh’s line on matters regarding Iran. Furthermore, in recent years, a wide range of factors has prompted Oman to invest in its relationship with Iran, most notably underscored by Muscat and Tehran’s plans to complete a subsea natural gas pipeline project, making Oman the first GCC member to develop energy infrastructure directly linking the Arabian Peninsula to Iran. Moreover, a major reason why Oman has turned closely to Iran is Muscat’s strategic thinking that deeper ties with Tehran affords the sultanate greater independence from the GCC’s powerhouse — Saudi Arabia — which the Omanis often see as an overbearing neighbor. Not lost in the equation is the fact that numerous Saudi clerics have promoted intolerant views of Ibadi Muslims, labeling them “heretics.” Naturally this does not sit well with the Omanis, the majority of whom practice Ibadism, a characteristically peaceful and tolerant sect of Islam. Maintaining autonomy from the kingdom’s geopolitical and religious authority has always been a pillar of Omani foreign policy.

It is premature to conclude that by joining IMAFT the Omanis have abandoned their longstanding regional neutrality in favor of a closer alignment with Riyadh and Abu Dhabi. More likely, Oman is signaling its commitment to working with fellow Arab Gulf states in the quest to fend off new transnational threats from ultraviolent and extremist Salafist-jihadist forces such as al-Qaeda in the Arabian Peninsula and IS in Yemen, which is not in itself an indicator that Muscat plans to drastically redirect its foreign policy or backtrack in its relationship with Tehran.

In fact, last February and March — two months after Saudi Deputy Crown Prince and Defense Minister Mohammed bin Salman announced the launch of IMAFT — 19 of the alliance’s members held a joint drill in Saudi Arabia called Operation North Thunder. Oman, although not an IMAFT member at the time, participated in the historic exercise of 20 Arab/Muslim nations. Muscat partaking in Operation North Thunder underscored the sultanate’s interest in working with the coalition to share intelligence and strengthen counterterrorism initiatives within the Arabian Peninsula even if the Omanis were cautious about officially joining IMAFT right off the bat. Put simply, Muscat wanted to learn more about the Riyadh-led alliance’s purpose and tactics before entering it.

It is not clear that Omani-Iranian cooperation will suffer as a result of the sultanate joining the Saudi-led coalition. Iran has vested interests in maintaining its multifaceted and maturing ties with Muscat, and it is unlikely that the Iranians will walk away from the Omanis because of the sultanate’s recent decision. Oman likely made this move based on the premise that becoming the alliance’s 41st member would not come at the expense of Muscat and Tehran’s relationship. Assuming that Oman and Iran continue their own joint military exercises in the Strait of Hormuz, the sultanate will likely remain the only Arab state that conducts military drills with both Saudi Arabia and Iran, highlighting Muscat’s unique role in the Middle East’s geopolitical order.

The long-term strategic implications of Muscat entering IMAFT are unclear. Oman’s foreign policy has largely rested on the key pillars of neutrality and nonintervention. By staying out of the Yemen civil war, having not joined the US-led military campaign against IS in the Levant and refraining from any intervention in the 2011 uprising against Libya’s former regime, the Omanis have avoided deploying their military forces for combat outside of GCC territory despite other Arab Gulf states doing so in recent years. Given that IMAFT is based on the idea of a pan-Sunni Muslim military alliance working together to defeat terrorists in hotspots across the Islamic world, active Omani participation in such deployments — if they ever take place — would mark a major change in Muscat’s foreign policy. Thus far, however, there is no evidence that the Omanis have any plans to embark on such a strategic shift.

As tension between Saudi Arabia and Iran escalates, Muscat’s ability to strike a balance between both countries will become increasingly difficult. For the sultanate, however, positioning itself as a neutral platform for talks aimed at solving regional and global security crises by promoting a “Gulf detente” has always been a high priority ever since the GCC’s establishment in 1981. Although officials in Riyadh and Tehran may see their rivalry as a zero-sum game, Oman does not. Muscat views its interests as best advanced by strengthening its alliances with the other five GCC states as well as Iran. That being said, this year the sultanate will likely come under greater pressure from Saudi Arabia to align more closely with Riyadh at Tehran’s expense, challenging Muscat’s efforts to maintain its unique role in the region as both a Saudi Arabian and Iranian ally. Indeed, no one ever suggested that it is easy to conduct a Swiss foreign policy in the Middle East, yet thus far Oman has done an excellent job of doing so.