Oman and Iran: friends with many benefits

Oman is willing to brave the GCC's disapproval to take advantage of opportunities with and for Iran. 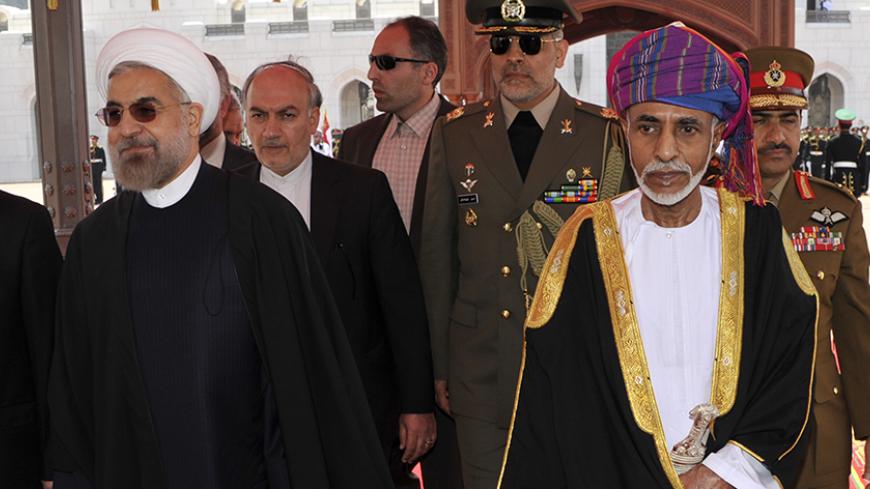 Oman shares the Strait of Hormuz with Iran and maintains cordial relations with Tehran, despite the former’s membership in the mostly anti-Iranian Gulf Cooperation Council (GCC). As Iran gradually reintegrates into the global economy, Oman is becoming a stepping stone for Iranian companies seeking to penetrate new African, Asian and Arab markets.

Oman’s emergence as a critical trade hub linking Iran to several continents is consistent with the sultanate’s independent foreign policy, which often operates outside the GCC framework. Oman’s commercial, cultural and geospatial links to non-Arab lands are rooted in its history as ruler of an empire that stretched across portions of modern-day India, Pakistan, Iran, Somalia, Mozambique and Tanzania. Oman’s pan-Indian Ocean identity often transcends its Arab/Islamic identity and its membership in the Saudi-led GCC.

Now that Iran is shedding the sanctions it has borne for years, Oman has new opportunities to position itself as an increasingly important trade corridor.

The Joint Comprehensive Plan of Action (JCPOA) was implemented Jan. 16. Six days later, Gulf News reported that Tehran’s ambassador to Muscat, Ali Akbar Sibaveh, declared that Iran will “repay” Oman’s capital, Muscat, for its influential role in getting the nuclear deal passed and the sanctions lifted. Sibaveh said, “Friends at times of need are few and Oman stood with us through thick and thin, and we do not forget our friends.”

Iran made good on that promise in March when it announced it is establishing a $200 million joint venture with Oman. The venture, Orchid International Auto, will build an automobile plant in Duqm, situated along Oman’s Arabian Sea coast. Oman’s state-owned investment fund will share ownership with Iran Khodro Co. — Iran’s largest car company — and an Omani investor.

The Iranian automotive group intends to begin production next year to produce 20,000 units before mid-2018. Iran Khodro’s chief executive, Hashem Yekke-Zare, announced that only 5,000 units are intended for Oman and that the other 15,000 are destined for Ethiopia, Eritrea, Sudan and Yemen. Iran also plans several other projects in Oman, including a nanotechnology plant, a hospital complex and the inauguration of flights between Oman and Chahbar, Iran.

In January, Iran Khodro also signed a $436 million deal under which France’s PSA Peugeot Citroen will produce 200,000 cars annually at the venture’s peak. The companies are to be equal partners, Iran’s Financial Tribune reported.

Plummeting oil prices have severely damaged Oman’s state finances, pushing the Gulf Arab nation into a financial squeeze. Like other GCC states, Oman is determined to diversify its sources of revenue. In fact, 21 years before Saudi Arabia’s Deputy Crown Prince announced the kingdom’s Vision 2030, Oman outlined its Vision 2020, which was also aimed at growing the nation’s private economy, increasing revenues outside of the oil sector and investing in the country’s human capital.

During Iranian President Hassan Rouhani’s visit to Muscat in March 2014, Omani and Iranian officials agreed to establish a 124-mile-long undersea gas pipeline connecting the two countries. As Oman turns to liquefied natural gas (LNG) exports as a means of decreasing dependence on oil, importing Iranian gas for the sultanate’s domestic consumption can free up the Gulf Arab state to sell more of its LNG to foreign countries.

Oman offers Iran a stepping stone to Africa, but the lifting of sanctions on Iran also enables the sultanate to deepen energy relations via Iran with gas-rich Central Asia. The passage of the interim nuclear agreement in November 2013 marked an important step toward building a Central Asian-Iranian-Omani trade nexus. In August 2014, the foreign ministers of Oman, Iran, Turkmenistan and Uzbekistan met in Muscat to sign a memorandum of understanding — “Establishment of the International Transport and Transit Corridor” — within the framework of the Ashgabat Agreement, signed in 2011 to establish a corridor among the four countries. (Since then, India and Kazakhstan have joined.) The foreign ministers also reviewed principles for opening up the Omani ports of Sohar, Duqm and Salalah to Central Asia. Prospects for this trade corridor unquestionably prompted Omani officials to diplomatically pursue the unfreezing of Iran’s trade with the outside world and to ease tensions between Iran and its adversaries.

From the perspective of Saudi Arabia and other GCC states, Iran’s reintegration with the global economy is a troublesome, albeit expected, outcome of the JCPOA. The Saudis were angry when they learned that their Omani counterparts were hosting secret talks on the nuclear deal between American and Iranian officials and pursuing such diplomatic avenues independently from the council. As Oman continues to play an integral role in Iran’s efforts to develop new markets across the Indian Ocean and the greater Middle East, the issue of deepening Muscat-Tehran ties will likely remain a source of tension within the GCC. The council is certainly wary of Oman pursuing an independent foreign policy that could weaken the framework and collective security of the Gulf Arab states.

Yet as Omani-Iranian trade grows, and ports such as Duqm offer Iran myriad opportunities, Oman’s fellow GCC states also have much to gain from the sultanate’s enhanced infrastructure and its access to the Arabian Sea and Indian Ocean. When the Omanis began constructing the Duqm port in 2013, Saudi Arabia and the United Arab Emirates recognized a chance to decrease their dependence on the Strait of Hormuz for transferring their own oil and initiated plans to connect their roads, railways and pipelines to Duqm.

As a politically stable country on the Arabian Peninsula’s southeastern corner, Oman is surrounded by some of the world’s most sensitive geopolitical fault lines and important trade corridors. Under the leadership of Sultan Qaboos bin Said, Muscat has cautiously and pragmatically navigated through the region’s geosectarian divisions to maintain positive relations with all powers. A key pillar of the sultanate’s foreign policy has been to balance the interests of its more powerful neighbors off one another to advance its own.

The Omanis have long seen Saudi Arabia as an overbearing neighbor, and today Muscat and Riyadh officials harbor strong disagreements about numerous issues, ranging from oil production to Saudi Arabia’s military intervention in Yemen. The deepening ties with Iran allow Oman to secure geopolitical independence from Riyadh, which will continue as more sanctions against Iran are lifted, offering the sultanate new opportunities in the global economy. The growing Omani-Iranian trade corridor will facilitate Oman’s assertion of an independent foreign policy rooted in the nation’s unique history as the center of an Indian Ocean empire. Indeed, as the Omanis plan for their future, they are looking, at the same time, to their past.