With a long history as a regional mediator and close ties with both Riyadh and Tehran, will Oman be able to cool the recent Saudi-Iranian tensions following the execution of Shiite cleric Nimr al-Nimr? 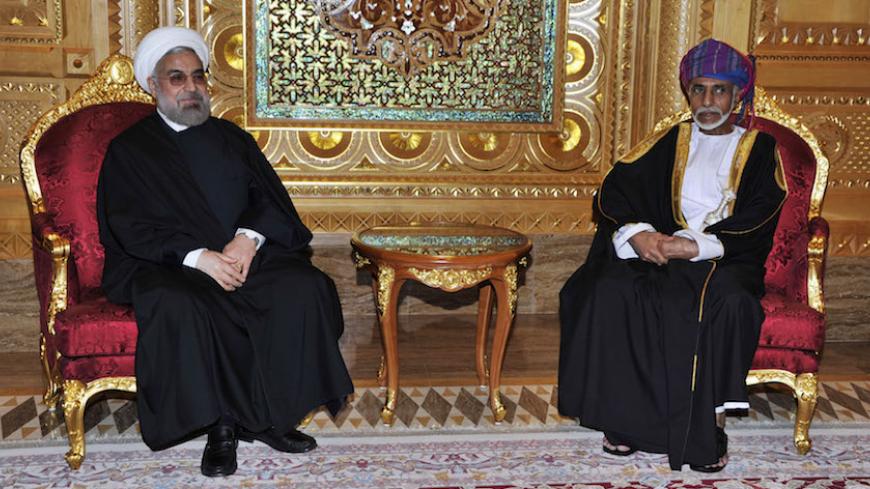 SALALAH, Oman — The Sultanate of Oman has always been the Gulf Cooperation Council (GCC) member on best terms with Iran. Muscat’s alliance with Tehran must be understood within the context of Oman’s independent approach to foreign affairs under Sultan Qaboos’ leadership.

Since seizing power in 1970, Qaboos has wisely and strategically balanced the conflicting interests of Oman’s larger and more powerful neighbors against one another without making enemies. A key pillar of Oman’s foreign policy has been to maintain alliances with both Riyadh and Tehran, rather than siding with Saudi Arabia to counter the Islamic Republic.

The Middle East’s escalating geopolitical crisis of early 2016 — stemming from Saudi Arabia’s execution of Sheikh Nimr al-Nimr on Jan. 2, followed by Iran’s livid response — is testing Oman’s ability to maintain such strategic neutrality at a time when Riyadh is determined to unite its allies against Tehran.

At this pivotal juncture in Middle Eastern history, during which sectarian tensions have reached their highest level since the Iran-Iraq War (1980-1988), there is no indication that Oman is on the verge of abandoning this conciliatory approach. On the contrary, Omani officials have responded to the escalation of Saudi Arabia and Iran’s geopolitical rivalry in their traditionally calm manner.

Omani leaders did indeed condemn the violent attacks on Saudi Arabia’s diplomatic presence in two Iranian cities following Nimr’s execution, calling the actions “unacceptable.” However, unlike the other GCC members, Muscat did not sever and/or downgrade diplomatic relations with Tehran. In fact, Oman’s foreign minister, Yusuf bin Alawi bin Abdullah, and Oman's ambassador to Iran, Saud bin Ahmad al-Barwani, traveled to Tehran to meet with Iranian officials and to discuss the crisis.

From Muscat’s vantage point, this escalation of geopolitical tension and sectarian strife is unfortunate, and may severely undermine Oman’s own national interests across the region. Last year, Muscat spent considerable effort advancing dialogues between Syria and Yemen’s warring factions. Yet, now that Saudi Arabia and nine of its allies and partners (Bahrain, Comoros, Djibouti, Jordan, Kuwait, Qatar, Somalia, Sudan and the United Arab Emirates) have severed and/or downgraded diplomatic ties with Iran — with leaders in Egypt and Turkey expressing pro-Saudi positions — such a diplomatic crisis truly jeopardizes fragile peace initiatives in Syria and Yemen.

Oman shares ownership of the strategically prized Strait of Hormuz with Iran, and therefore has its own deep national interests at heart in cooling tensions between fellow GCC members and the Islamic Republic. The issue of the sultanate’s long-term energy demands is at the fore. Although the project has not moved as quickly as Muscat would have preferred, Oman and Iran are in the process of developing an underwater natural gas pipeline between the two nations. Oman, which is less oil rich than other GCC members and faces grave economic problems as a result of low oil prices, views the importation of Iranian natural gas as a critical geopolitical and economic objective. Surely Muscat will be careful to avoid moves that could compromise this growing energy relationship with Iran, which, by extension, opens up Oman to the gas-rich nations of Central Asia.

Not lost in the equation is sectarianism. Oman, with an Ibadi majority, views the escalation of sectarian strife between the Middle East’s Shiite and Sunni Muslims as a tragedy for the greater Islamic world. Rather than joining Saudi Arabia in arming Sunni fundamentalists across the region to counter Iran’s extended influence, Oman has avoided taking sides in such conflicts, valuing instead a peaceful resolution. Oman has leveraged its neutrality to develop trustworthy relationships with all sides in the Syrian and Yemeni crises, enabling the sultanate to serve as a legitimate and impartial mediator in ways that no other GCC member could.

Oman: Iran’s only loyal friend in the GCC

Historical bonds between Iran and Oman (made especially strong by the shah’s deployment of forces to the Dhofar governorate to help the sultanate crush a foreign-backed Marxist insurgency in the 1970s) shape Muscat’s unique understanding of Iran and its role in the Gulf’s geopolitical order. Oman does not view Iran as a Persian empire, a monarchy or as an Islamic republic, but rather as a neighbor that will always exist regardless of whichever political structure holds power.

That said, no two states have all interests in common, and Oman and Iran’s relationship is not entirely free of issues. Ever since the Iranian revolution, officials in Muscat and Iran have had fundamentally different outlooks on the American military role in the Gulf. Oman, a close ally of the West, has always relied on the world’s strongest naval power of the day — once Britain, now the United States — to safeguard its national security. Since 1979, however, Iran’s leadership has viewed the US military’s presence in the Middle East as a root cause of insecurity and instability.

Despite Muscat and Tehran’s conflicting understandings of America’s military presence in the region, Omani officials have always believed that it is best to address problems in Arab-Iranian relations using dialogue, not belligerency. Undoubtedly, the severing and/or downgrading of relations between 10 Sunni African and Arab governments in the region and Iran mark a setback to Muscat’s efforts to advance such a meaningful dialogue.

The unfortunate events that heralded in the new year underscore how Oman is truly the GCC’s outlier. In breaking with the Saudi-led council’s framework, Muscat did not permit Iran’s angry response to Nimr’s execution to justify cutting off diplomatic ties with Tehran.

The full implications of this dangerous escalation of tension between Saudi Arabia and Iran have yet to be realized. However, as the one GCC state that has maintained official relations at the highest level with Iran, Oman is likely Riyadh’s only ally in a strong enough position to cool Saudi Arabia and Iran’s recently exacerbated tensions through mediation. It would be wise for leaders on both sides of the Gulf to tone down their inflammatory rhetoric, to put an end to recklessly impulsive behavior and to follow Oman’s mature lead by engaging in dialogue rather than issuing threats.