Can Oman help Saudis save face in Yemen?

Oman, the only GCC country that did not join the Saudi coalition fighting in Yemen, could help the Saudis negotiate peace there. 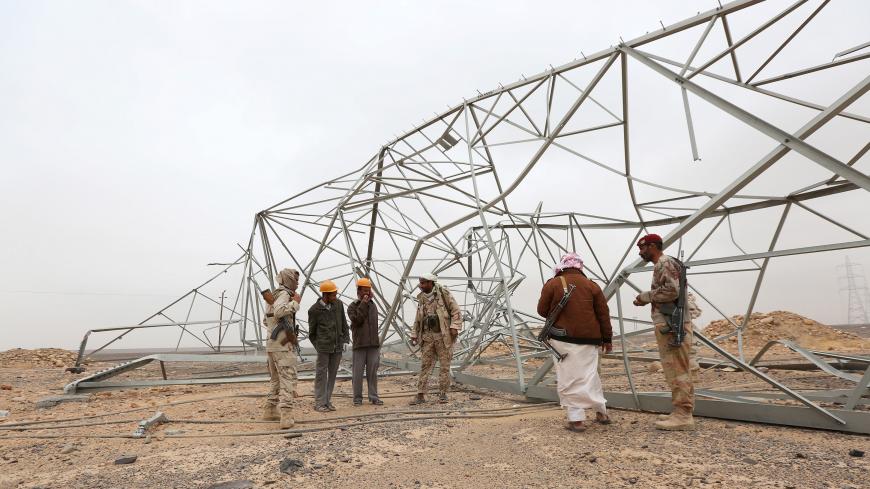 Soldiers loyal to Yemen's Saudi-backed government and members of an engineering team stand next to destroyed transmission towers during a search for land mines left by Houthi rebels in the Mas area, which was taken by the pro-government army from the Houthis, in the country's central province of Marib, Dec. 26, 2015. - REUTERS/Ali Owidha

Nine months after launching Operation Decisive Storm, the Saudis find themselves entrenched in a humiliating quagmire while extremists such as the Islamic State (IS) are proving to be the only victors in Yemen’s civil war. The kingdom has received strong criticism from the international community and human rights groups, which accuse Saudi Arabia of carrying out war crimes against Yemeni civilians. Moral costs aside, the expensive military campaign has also exacerbated Riyadh’s financial crisis.

In light of the failed peace talks earlier this month in Switzerland and the resumed fighting in northern Yemen, the Saudis face a major strategic dilemma. If the next round of talks scheduled for early 2016 also falls apart, should the kingdom continue funneling resources into this bloody stalemate, or retreat without having achieved any of Riyadh’s objectives? Desperate for a dignified exit from Yemen, the kingdom has turned to its neighbor Oman for a political solution to the worsening crisis. Ultimately, this plan might be Riyadh’s most realistic means of saving face in Yemen.

The sultanate: a diplomatic bridge

Last month in Muscat, Saudi Arabia’s foreign minister, Adel al-Jubeir, met his Omani counterpart, Yusuf bin Alawi, to discuss greater cooperation among the six Gulf Cooperation Council (GCC) members with regard to Yemen. Calling for “calm diplomacy,” Alawi said that Oman seeks “long-lasting political solutions” resulting from a “rapprochement among all parties.” Although the collapse of Yemen’s internationally recognized government in January elicited fundamentally different responses from Saudi Arabia and Oman, Alawi said that Riyadh and Muscat have “agreed to look forward and break from the past.”

Oman was the only GCC member that did not join Operation Decisive Storm. Oman’s mature and far-sighted response to the Houthi takeover of Sanaa underscored Muscat’s understanding of Yemeni history, where no fighting force has ever been able to seize control of the entire nation. Conflict resolution in Yemen will require a power-sharing agreement in which all sides have a voice at the table, rather than a military campaign aimed at crushing the Houthi rebel movement. To this end, Muscat has maintained its neutrality throughout the conflict and has been committed to advancing peace talks.

Since the launch of Operation Decisive Storm, Oman has hosted representatives from many factions in the civil war. In May, US State Department officials held secret talks in Muscat with a Houthi delegation, and Houthi representatives met with Iranian Foreign Minister Mohammad Javad Zarif and with GCC officials. Omani officials have also secured the release of Western civilians detained in Yemen by militant groups.

It is Oman’s own quest for long-term stability in neighboring Yemen, however, that motivates Muscat to further talks involving the relevant parties aimed at reaching a permanent cease-fire. From Oman’s vantage point, the Houthis and Saleh loyalists do not represent the same threat that Muscat’s fellow GCC members perceive from these actors. Instead, the Omani leadership is most unsettled by the threat that a prolonged conflict poses to the security of Oman’s Dhofar governorate, situated along the Gulf Arab nation’s 187-mile border with Yemen.

Before Sultan Qaboos took power in 1970, internal conflict fragmented Oman. From the 1850s to 1950s, two power centers — the Ibadi imamate in the interior and the sultanate along the coast — governed Oman. By 1959, with British support, Qaboos’ father managed to crush a revolt waged by the Ibadi imamate, consolidating the sultanate’s control over the entire country, including the newly discovered oil reserves of the interior. In the 1960s, a foreign-sponsored Marxist rebel group — the Dhofar Liberation Front, later named Popular Front for the Liberation of the Occupied Arabian Gulf — waged an insurgency, which the monarchy officially defeated in 1976 with support from the British, Iranians and Jordanians.

As Omanis face the challenges associated with the succession issue, Muscat officials are unsettled by the potential for groups in the historically neglected Dhofar governorate to reject the legitimacy of Qaboos’ successor. Within this context, promoting a peaceful resolution to the Yemeni crisis at the roundtable serves Oman’s national interests. The potential for extremist groups to infiltrate Oman and foment unrest by stoking such historic tensions during the nation’s political transition is a risk that authorities in Muscat take seriously. Memories of the conflict between the Ibadi imamate and the sultanate and of the Dhofar rebellion remain vivid for Omanis of a certain age. Today, however, there is no doubt that jihadi extremists in Yemen such as IS are cause for far greater concern than the Cold War-era fighters from the Dhofar Liberation Front/Popular Front for the Liberation of the Occupied Arabian Gulf.

Although Oman’s independent foreign policy, which has operated outside the framework of the GCC, has been an irritant for the Saudis on past occasions, officials in Riyadh may come to be grateful for the Omani wisdom that led Muscat to avoid joining Operation Decisive Storm. That Saudi Arabia, the wealthiest Arab country and the world’s top arms importer, cannot defeat an insurgency from the most underserved region of the poorest Arab country is a source of humiliation.

The Saudis would be wise to take advantage of the diplomatic avenue that Oman offers Riyadh at this difficult juncture. Surely, continuation of this conflict will not benefit the long-term interests of the Saudis, Yemenis or Omanis.