US officials, while wary about Oman's ties with Iran, seek Oman's assistance in resolving Qatar dispute. 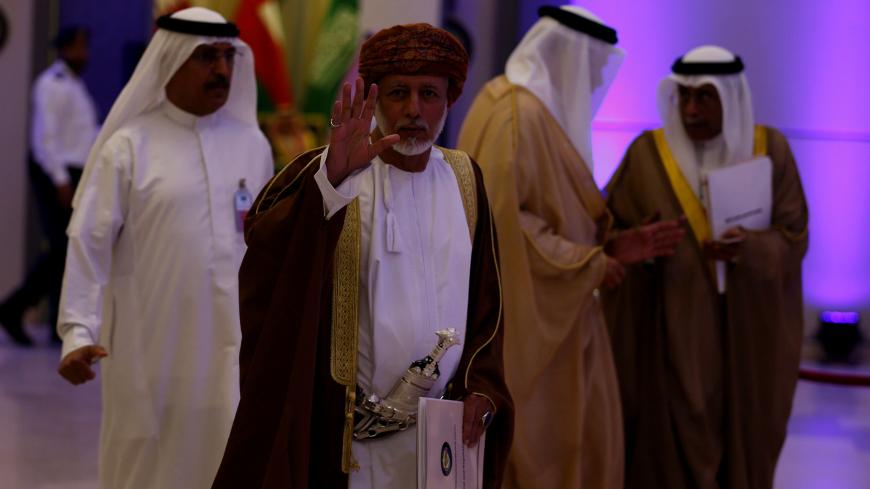 In their conversation, Trump stressed the urgency of countering Iran’s ascendancy shortly after Washington implemented new sanctions on Iranian individuals and businesses despite the Trump administration's certifying Tehran’s compliance with the Joint Comprehensive Plan of Action (JCPOA), at the same time maintaining that Iran has breached the JCPOA's “spirit.” This call also came one week after Alawi visited Tehran to discuss the ongoing Qatar crisis after he spoke by phone with Tillerson about Qatar and Yemen.

It is no secret that the Trump administration and Muscat have not been on the same page on a host of regional issues. The JCPOA, which Oman played a pivotal role in helping the Obama administration and Iran negotiate, was in Trump-the-candidate’s words "the worst deal ever" and he vowed to “rip up” the historic accord. In April, each GCC member, save Oman, strongly endorsed Trump’s decision to launch dozens of missiles at Syrian regime military infrastructure near Homs. On the Yemen front, the Saudi/United Arab Emirates-led military campaign, which the Trump administration has stepped up US support for, has irked Oman. Also, Trump’s urging of US allies throughout the Muslim world to help Washington counter Iran has not prevented Muscat and Tehran from continuing to maintain a close defense relationship as neighbors and co-owners of the Strait of Hormuz.

In the grander picture, Oman and the Trump administration's not seeing eye to eye on regional security issues has much to do with Muscat’s uniquely cooperative and normalized relationship with Tehran. While the Trump administration sees Iran as the Middle Eastern state most responsible for the outgrowth of terrorism and regional instability, Muscat views Iran as an important strategic partner across a diverse host of sectors. Furthermore, ongoing developments within the GCC in light of the Qatar crisis are prompting some smaller member states, including Oman, to constantly assess the strategic depth from Saudi Arabia that Iran offers them.

Omani-Iranian relations have led Muscat to conduct a foreign policy that is quite interactive with a host of state and nonstate actors across the Middle East, making Oman unique in the GCC. For example, Oman was the only GCC state to maintain official relations with the Syrian regime throughout the past 6½ years. Earlier this year, Muscat responded to suicide bombings in Damascus that left scores of people killed and wounded by sending Bashar al-Assad’s regime a message of condolence. Also, Omanis have strong feelings about their country’s historic ties with all of Yemen’s communities, including the Houthis. There is also strong disagreement with the Saudi/UAE-led military campaign in Yemen, which Oman has been the only GCC member to have stayed out of since the March 2015 launch of the operation.

Trump, Oman and the Qatar crisis

When Trump delivered his speech at the Arab Islamic American Summit in Riyadh two months ago, he commended all GCC states, save Oman, for their counterterrorism cooperation with the United States. While Trump was in Saudi Arabia, Oman’s Deputy Prime Minister Sayyid Fahd bin Mahmoud Al Said had a scheduled meeting with the American president that was canceled for reasons unknown to the public, as was Tillerson’s meeting with Alawi. This administration’s budget blueprint for the next fiscal year hints at a 35% decrease in US military aid to Oman, which is notable given the extent to which the White House has been inking landmark arms sales with other GCC states.

Perhaps the main variable that led to Trump and Qaboos’ first conversation was the Qatar crisis, which has likely prompted Washington to turn to Muscat as a regional mediator between GCC states. To be sure, Kuwait, and not Oman, has been leading inner-GCC diplomatic efforts to resolve this year’s row, and Washington has fully supported the Kuwaiti emir in doing so. Yet the Trump administration might be encouraging Oman to step up its own role in the ongoing row to help defuse the crisis in pursuit of reconciliation. Unquestionably, with the United States’ Sunni Arab allies divided, there is much potential for Iran to take further advantage of friction between the GCC’s various members to advance Tehran’s own political agenda in the Arab world.

Last month, the White House communicated to Qaboos that Oman’s economic relationship with Iran is not one Washington expects the sultanate to sever; this message was delivered when CIA Director Mike Pompeo and Trump's deputy national security adviser, Army Reserve Maj. Gen. Ricky Waddell, held a secret meeting with Qaboos. Pompeo and Waddell called on the Omani leader to do more to crack down on smuggling routes linking Iran to Yemen’s Houthi fighters allegedly via Oman’s ports and land border with Yemen. Although there is no solid evidence that Oman has facilitated this transfer of weaponry to the Houthis, the Trump administration and other GCC states seem to believe this narrative of Muscat’s role in the Yemeni civil war, which Omani officials unequivocally deny.

Over the years, Muscat has been a useful ally of the United States during challenging times. Now, with Washington deeply concerned about the GCC’s future, the White House has seemingly, albeit slowly, begun to show appreciation for the value of Oman as a unique ally that can help this administration navigate the Middle East.