Oman sees Saudi Arabia's strategy in Yemen as misguided and dangerous for the Gulf region. 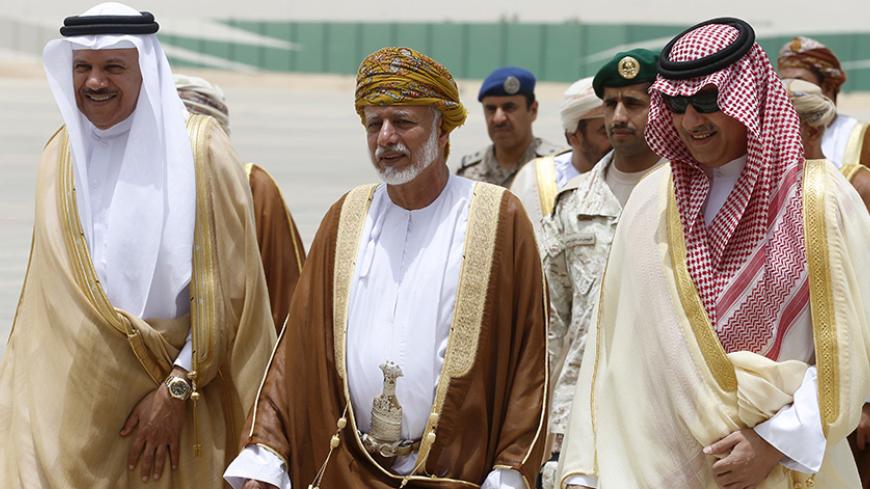 Saudi Arabia marshaled a seemingly impressive coalition for its air war on Yemen. In addition to its Sunni allies in the Gulf, Riyadh roped in partners ranging from Sudan to Morocco, and even far-off Senegal. However, one ally of the kingdom is sitting out the war: Oman.

Indeed, Oman is the only Arab monarchy that declined to participate in the Saudi-led Operation Decisive Storm in Yemen. By not deploying its military to strike Houthi targets in its southern neighbor, Oman is further demonstrating that it is the Gulf Cooperation Council (GCC) member most independent from Riyadh’s sphere of geopolitical influence — and most committed to cooling regional sectarian tensions.

Since March 26, Saudi Arabia and its allies have been unsuccessfully attempting to defeat the Houthis and restore Saudi-backed President Abed Rabbo Mansour Hadi to power in Sanaa. Yet, the Omani leadership views Riyadh’s strategy in Yemen as misguided and dangerous for the entire region.

Rather than dropping bombs, Muscat has opted for pressuring the international community to pursue a diplomatic solution to the rapidly deteriorating conflict. Oman has also emphasized that a negotiated settlement must come from the Yemeni people, not foreign governments. “Oman is a nation of peace," said Omani Foreign Minister Yusuf bin Alawi. "We cannot work on peace efforts at the same time we would be part of a military campaign.”

This strategy of relative neutrality is consistent with Sultan Qaboos’ traditional foreign policy of maintaining respectful relations with all relevant actors and offering Oman’s service as a third-party mediator. This same strategy brought American and Iranian diplomats to talk in Muscat in 2012, which led to the historic framework deal that world powers and Iran reached in Lausanne last month.

Oman functions as a diplomatic bridge between Iran on the one hand and the Sunni Arab monarchies of the Persian Gulf and their Western allies on the other.

As the one GCC state that shares the Strait of Hormuz with Iran, Oman has a vested interest in cooling the tensions between the Islamic Republic and the Persian Gulf’s Arab sheikhdoms. Muscat is also heavily invested in finalizing a deal between the P5+1 and Tehran to decrease the risk of a military confrontation over Iran's nuclear enrichment program — a conflict that would inevitably threaten Oman’s vital economic and security interests. From Oman’s perspective, the escalation of violence in Yemen could ignite a wider regional conflict that threatens both of these prerogatives.

There is also a sectarian dimension to Oman's position. The majority of Omanis practice Ibadi Islam — a strand distinct from both Sunnis and Shiites — and many have a fair deal of sympathy for the Houthis in Yemen.

Like Ibadis, the Zaydi Shiite Houthis are viewed by Saudi Arabia’s ultra-conservative Wahhabi religious establishment as "apostates" or "infidels." The history of Riyadh’s sponsorship of Salafist groups in Yemen is not received well in Oman, a unique Arab state given its reputation for religious tolerance. "There are common passionate feelings among Yemenis and Omanis that prevent Oman from participating in the conflict,” was how Alawi put it.

The Omani Initiative for Yemen

Oman has actively attempted to negotiate an end to the fighting in Yemen.

Last month, rumors circulated that the Saudi coalition’s brief cease-fire — which lasted less than 24 hours — came from an Omani-brokered deal involving both Iran and Saudi Arabia. Reportedly Muscat has also put before Riyadh and Tehran a seven-point plan — the so-called Omani Initiative — for achieving a peaceful resolution to Yemen’s ongoing conflict.

It is unclear if the initiative calls for the Saudi Arabian-led coalition to cease its bombing campaign. As Riyadh maintains that the coalition will continue until the Houthis have surrendered power, it also remains to be seen if any future Omani-brokered cease-fires could last longer than 24 hours.

Nonetheless, as Alawi stated, Oman views Yemen’s crisis as one that can only be solved through dialogue, rather than continued violence.

The sensitive border with Yemen

Regardless of whether Muscat can succeed in pressuring Yemen’s numerous armed groups, which now include a Daesh (Islamic State) faction, Omani officials must contend with the immediate threat of violent unrest spilling across the 187-mile border into southern Oman. Salalah, Oman’s second-largest city and main tourism hub, is situated not far from the Yemeni border.

In 2010, Omani and Yemeni officials confirmed that several al-Qaeda in the Arabian Peninsula (AQAP) militants had illegally crossed into Oman from Yemen. One year earlier, Omani authorities sentenced Ali Abdul Aziz al-Hooti — an Omani national who aided Lashkar-e-Taiba, a Pakistan-based group, in efforts to wage a terrorist attack in Oman — to death.

In an effort to fortress the sultanate from growing unrest in Yemen, Oman’s government approached India’s Central Public Works Department to construct a border fence along the entire Yemeni border for $300 million. Oman has also deployed forces to its land and sea borders with Yemen to protect itself from AQAP’s destabilizing terrorism in Yemen. Nonetheless, Said Kouachi — one of the AQAP militants who carried out the Charlie Hebdo attacks in Paris — entered Yemen from Oman, where he reportedly conducted training.

“We are concerned for many reasons," Alawi told CNN in February. "This is an area of chaos, and chaos gives a chance for … extremists and terrorists.” When asked about Oman’s capacity to protect itself from turmoil in Yemen, he said, “We have enough vision and arrangements in that part of the border.” Yet Alawi acknowledged, “There is a risk, of course; there is no border with zero risk.”

In the meantime, Oman has stepped up its humanitarian role by accepting Yemeni refugees. It was reported that nearly 2,700 people of 48 nationalities entered Oman as refugees from Yemen during the first half of April alone. The influx of a great number will add pressure on Oman’s government, which is already grappling with budgetary challenges at a time when low oil prices have created new realities for a country that relies on oil exports for 83% of national income.

Beyond financial burdens, experts warn that extremists could enter Oman while posing as refugees, which threatens to bring their operations into southern Oman. From there they could stage attacks against their enemies in Yemen or wage violence in Oman itself. The emergence of Daesh’s Yemeni division — which killed over 130 people in bomb blasts March 20 that targeted Houthi-controlled mosques in Sanaa before allegedly beheading four Yemeni soldiers and shooting 10 others April 30 — is only another troubling sign for Oman.

When Qaboos returned to Oman on March 23 — following an eight-month stay in Germany, where the leader who is said to be terminally ill underwent “medical “tests” — he came back to a country with a new dilemma on its southern border. Regardless of how Oman handles its succession question (itself a potential source of unrest), the next sultan will be compelled to address the dangerous threats that the Yemeni crisis poses to Oman’s security.

Unlike a handful of Arab states that have been beset by Islamist insurgencies and violence waged along ethnic, tribal and sectarian lines, Oman has stood out as a peaceful beacon of tolerance and harmony among its various religious and tribal groups. With Qaboos’ inevitable death already creating uncertainty about Oman’s future, the threat of Yemen’s escalating conflict and worsening humanitarian crisis has the potential to further complicate the Gulf Arab nation’s prospects for continued stability.