Ayatollah Ali Khamenei’s acknowledgement of the time necessary for the West to uphold its commitments gains great importance when put into the context of what he defines as “signing of the agreement.” 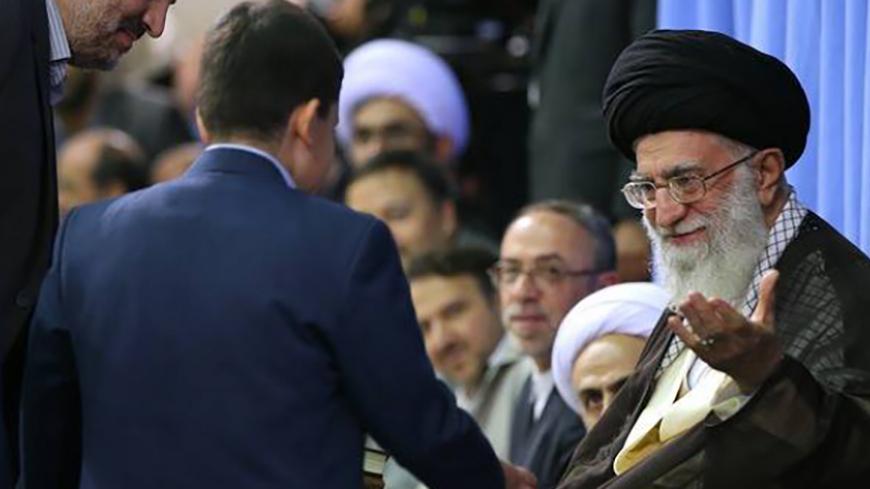 As negotiators from Iran and the world's major powers rush to strike a comprehensive nuclear deal, concerns have again emerged over a speech by Ayatollah Ali Khamenei. This time last year, concerns emerged over Khamenei’s statement that Iran sought an eventual enrichment capacity of 190,000 Separative Work Units (SWU), even as the Iranian supreme leader refrained from offering a clear time frame for such plans.

In reaction to a speech by Khamenei in Tehran earlier this week, many journalists and political analysts have interpreted the Iranian leader’s remarks, particularly on sanctions — a key stumbling block in the talks— as undercutting his own negotiators. Specifically, focus has been on Khamenei’s assertion that “the economic, financial and banking sanctions, whether related to the [UN] Security Council or the US Congress or the US administration should be lifted immediately when the agreement is signed” and that “the removal of sanctions is not tied to the implementation of Iran’s commitments.” These comments have been construed as Khamenei stiffening Iran’s “red lines” and seeking unilateral Western concessions as early as next month.

Khamenei, Iranian President Hassan Rouhani and Atomic Energy Organization of Iran chief Ali Akbar Salehi have all made the exact same remarks about sanctions relief following the April understanding on the political framework of a final nuclear deal.

Moreover, unless Khamenei’s remarks are put in the context of his speech as a whole, and the terms he used about a potential agreement are sufficiently defined, it's easy to misread what was said. In the same vein as his comments on Western penalties, Khamenei asserted that “the lifting of sanctions has different phases of implementation and we accept this,” adding that “implementation of the lifting of sanctions should be in line with the implementation of Iran’s agreed commitments.”

Oddly, in this case, Khamenei’s own media office seems to have abetted the mainstream reading of his remarks. Khamenei has two websites: Leader.ir and Khamenei.ir. His crucial comment that “the lifting of sanctions has different phases of implementation and we accept this” is omitted in both the English- and Persian-language transcripts of the speech on Leader.ir, while it's only available in Persian on Khamenei.ir. Al-Monitor was able to confirm this key remark after reviewing Persian-language video of the speech disseminated by Khamenei.ir.

Khamenei’s acknowledgement of the time necessary for the West to uphold its commitments gains great importance when put into the context of what he defines as “signing of the agreement.”

Speaking to Al-Monitor on condition of anonymity, Iranian sources said nothing will be signed in Vienna, even if a deal is reached. They noted that the United States has its own domestic process for ratifying the deal, and that if it does, the P5+1 (the five permanent members of the UN Security Council plus Germany) and Iran can start implementing commitments. According to the sources, this process will take time. The reduction of the number of centrifuges, for example, can't be done in a matter of days. Moreover, as both sides begin taking measures, there will be a mechanism to ensure that on an agreed date, when the deal will be considered implemented, both sides will have lived up to their commitments. The Iranian sources said that Khamenei was referring to the date of implementation in his speech. They added that Iran still seeks UN Security Council issuing of a resolution endorsing the agreement.

This reading of the process of a final deal’s implementation corroborates Khamenei’s emphasis on the two sides simultaneously taking measures to uphold their commitments. It also confirms remarks by US officials that nothing will be signed in Vienna.

The idea that there will be a gap between the securing of the deal and its implementation is not new: the interim Joint Plan of Action was signed in Switzerland in November 2013, but only implemented from January 2014. Thus, another key question, particularly for ordinary Iranians, is how long the implementation process will take. According to the sources Al-Monitor has spoken to, this has yet to be agreed. But Iranian officials have indicated the potential timespan, including the period Congress will take to review a potential final agreement.

At a news conference to mark the second anniversary of his election, Rouhani was directly asked about the time frame for the deal's implementation. Besides saying “a couple of months,” he summarily dismissed one question about whether sanctions relief could be as long as a year away following a final deal. “A one-year difference is totally untrue … it might be one month … we are discussing,” Rouhani said.

The most pointed estimation of the implementation phase of a final deal has come from Deputy Oil Minister Amir Hossein Zamaninia, who also serves as a senior adviser to the Iranian president. Zamaninia was a member of the Iranian nuclear negotiating team until earlier this year, when he assumed his current position. Speaking in Tehran in late May, Zamaninia said, “We should wait for the complete removal of the economic and banking sanctions against Iran by Azar.” The month of Azar on the Iranian calendar begins Nov. 22.