Following growing concerns in the Israeli Druze community over the fate of their Syrian brothers, Israel Defense Forces spokesman Brig. Gen. Moti Almoz tells Al-Monitor that Israel does not collaborate with Jabhat al-Nusra. 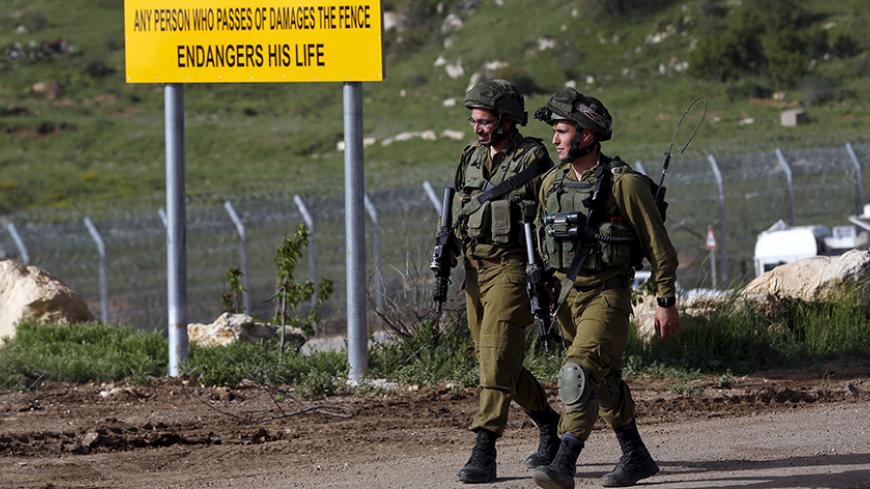 Israeli soldiers walk near the frontier with Syria near Majdal Shams in the Golan Heights, April 27, 2015. - REUTERS/Baz Ratner

A military ambulance was speeding along the winding road leading from the Mount Hermon base of the Israel Defense Forces (IDF) toward the Golan Heights. It was the evening of June 22, and the ambulance was heading toward the field hospital that the army had set up to treat the flow of wounded from Syria. Along with the Hermon Brigade’s doctor and a medic, the ambulance contained two wounded Syrians in critical condition. The passengers in the ambulance never dreamed of what was waiting for them just around the next bend.

As it approached the large Druze village of Majdal Shams in the Golan Heights, the ambulance encountered a mob of locals, waiting along the side of the road. A clash erupted, and some 150 Druze started throwing rocks at the ambulance. It tried to flee the scene and make its way to the Israeli village of Neve Ativ, but at some point the road was blocked by Druze in all-terrain vehicles. The mob seized control of the ambulance, and the doctor, medic and driver all suffered minor injuries. While reinforcements consisting of IDF officers watched helplessly in the distance, the rioters attacked the wounded passengers. One was killed on the spot, while the other is now lying unconscious and in critical condition at an Israeli hospital. It was the first time that the wounded victims of war were lynched on Israeli territory.

The incident sent shock waves throughout the IDF and Israeli society. Prime Minister Benjamin Netanyahu was to meet the heads of the Druze community July 24.

At an emergency meeting of the Druze leadership that took place the day after the incident, the participants condemned what happened unanimously. Meanwhile, Israel has intensified its information campaign among the Druze in an effort to convince them that Israel is neither collaborating with nor aiding Jabhat al-Nusra fighters. Nevertheless, many members of the Druze community are convinced that most of the wounded Syrians taken for treatment in Israel are actually members of Jabhat al-Nusra. On June 11, that same group allegedly committed a massacre of Druze in northern Syria, where the community lives along the border with Turkey.

Adjacent to the Hermon post (on the Syrian side of the border) is another Druze enclave containing the village of Khadr. Israel’s Druze are worried that Jabhat al-Nusra, which is holding the area under siege, is about to conduct another massacre targeting their brothers. It is therefore no wonder that rumors that Israel is helping Jabhat al-Nusra have riled up the Druze community. The lynching was only the most recent boiling point. Meanwhile, Israel vehemently denies charges that it is helping the Syrian rebel movement.

The first group of people suspected of participating in the lynching was arrested the morning of June 24 near Majdal Shams. Nevertheless, the shock waves in Israel have yet to subside. The Druze living in the Golan Heights constitute a distinct community, which was only annexed to Israel after the 1967 Six-Day War, and its members are for the most part still loyal to Syrian President Bashar al-Assad. This distinguishes them from their Israeli Druze brothers, who number over 130,000. The latter have supported the State of Israel from the time it was founded in 1948. They serve bravely in the IDF, and have been known for their outstanding contributions and courage when serving ever since Israel was created.

IDF spokesman Brig. Gen. Moti Almoz has invested considerable effort over the past few weeks in an attempt to placate the Israel-Druze front; this move occurred first and foremost out of concern for the Syrian Druze. Israel is determined to stick to its decisions and not get dragged into the conflict in Syria. It intends to watch from the sidelines and avoid getting involved or making commitments to one side or another. Israel describes this status as critical, to prevent (as far as possible) events in Syria from trickling into Israel. Now that the situation with the local Druze is erupting, the task becomes many times harder.

Al-Monitor:  Brig. Gen. Almoz, can it be determined that the incident is over, and that the situation is back under control?

Almoz:  This was a very sensitive incident. It is hard to tell if it is over. We are doing everything we can to end it and ensure that it doesn’t recur. We are working together with the Druze leadership. Yesterday, the Druze leadership condemned what happened in Majdal Shams unequivocally, unanimously. We are taking many precautions to ensure both the security of the northern front and our Druze brothers and sisters.

Al-Monitor:  Has the risk of Israel being dragged into the Syrian conflict increased? Does that worry the IDF?

Almoz:  Yes. We are doing everything we can to secure the border and protect Israeli interests. I say it again. Jabhat al-Nusra is not receiving any aid from the IDF. A few years ago, Israel decided to open its gates to wounded Syrians, and we cannot put a filter on the border. Until now, whenever anyone shows up on our border looking like he or she needs help, this person is cared for quickly and efficiently. Obviously, this includes women and children. Unfortunately, the speed with which we can deliver this care has slowed down considerably as a result of the murder. We assessed the situation after the incident and decided to carry on as usual.

Al-Monitor:  Will there be changes to the evacuation routes or the security measures taken to protect the ambulances that carry Syrian wounded to the hospitals?

Almoz:  That would hardly bring respect to anyone. Helping the wounded is an utmost value. Druze society must understand that. I am convinced that the Israel police will get its hands on all the people who committed the murder, while we continue to embrace the Druze community and express understanding for its concerns.

Al-Monitor:  It was a large crowd gathered there. We’re talking about some 150 people who were involved in the attack.

Al-Monitor:  Let me ask you again, explicitly. Is Israel collaborating in any way with Jabhat al-Nusra?

Almoz:  I can tell you unequivocally that it never happened. What may have happened is that among the many thousands of wounded, who came to Israel over the past three years, there may have been one or two — a handful of individuals — with ties to Jabhat al-Nusra. There is no way to control numbers like that.

Al-Monitor:  Is there any way to check the identities of the wounded before they enter the country?

Almoz:  Not in real time. Some of them show up with very serious injuries, and intensive medical care onsite [in Syria] is not provided to them. It is not like it is with our own soldiers, with medics providing initial treatment in the field, followed by the first and second field aid stations. In the battlefield, we are cautious about the “golden hour” — the short and critical time frame in which we must evacuate soldiers with traumatic injuries. Thus they are rapidly flown to the hospital. Those Syrians wounded, due to the situation and circumstances, come to the border with serious injuries, without having received any first aid. Speed is of essence here. We conduct a security check and bring them right in. We don’t have time for anything else.

Al-Monitor:  What is the situation in the Khadr enclave? Are the Druze living there at risk of attack by the Sunni rebels?

Almoz:  There is fighting underway in the northern part of the region. Within the Druze village of Khadr itself, things are quiet, at least in Syrian terms. I was at the Mount Hermon post two days ago. The village is situated right below it. The village is quiet. The fighting is taking place on the outskirts of the village, but within the village itself, people are free to go about their day-to-day lives. There are no attacks or murders or massacres in the village, despite the rumors that we have been hearing.

Al-Monitor:  On Friday, June 19, Channel 2 aired a report, in which wounded Syrian fighters hospitalized in Israel said that once they recuperate, they will return to the fighting and kill Druze. What do you think about that?

Almoz:  It wasn’t a new report. Those things were aired in the past. We are not hiding the hospital [Safed Hospital]. The story is important for Israel’s own public diplomacy campaign, and it is something that the public must know about. The Israeli media has the right and obligation to cover the story, subject to the protection of individual privacy. People are free to take the information any way they want, but they are not allowed to murder people because of something they saw on television.

Al-Monitor:  Why won’t Israel make a commitment to help the Druze of Syria if something happens?

Almoz:  The Druze community is very important to us. It has shared in the burden of defending the country practically from the day that Israel was founded, not only through its Druze units [IDF units reserved to Israeli Druze soldiers], but through all units in the IDF. Personally, I have many Druze friends. I consider them colleagues, partners and brothers in arms. Over the past month, we have been engaged in an authentic and trustworthy dialogue with the leaders of the Druze community, based on friendship and mutual respect. The whole issue is very sensitive and complicated, also on the operational level. We are taking all possible steps to prepare ourselves for every eventuality and for various scenarios. Given the nature of these preparations, I cannot go into any further detail.

Al-Monitor:  Are preparations underway to take in Druze refugees into Israel if and when the situation escalates?

Almoz:  I cannot go into detail about that. We are busy making all sorts of plans. The best thing would be that the situation in Khadr remains safe. We are doing everything we can to ensure that. It is only natural that we lack the same capabilities there that we have in Israel. The Druze community is our partner. It had a chance to see what is happening. We brought the Druze leadership to Mount Hermon last week so that they could see for themselves what is happening in Khadr. All the information we get is relayed to them. The partnership is good, and it will yield good results.