Druze caught up in 'game of nations'

The Syrian Druze, staunch allies of the Assad regime, face an existential threat from opposition forces, which is why Druze leaders in neighboring countries have been calling for arming them and for better relations with the Sunni community. 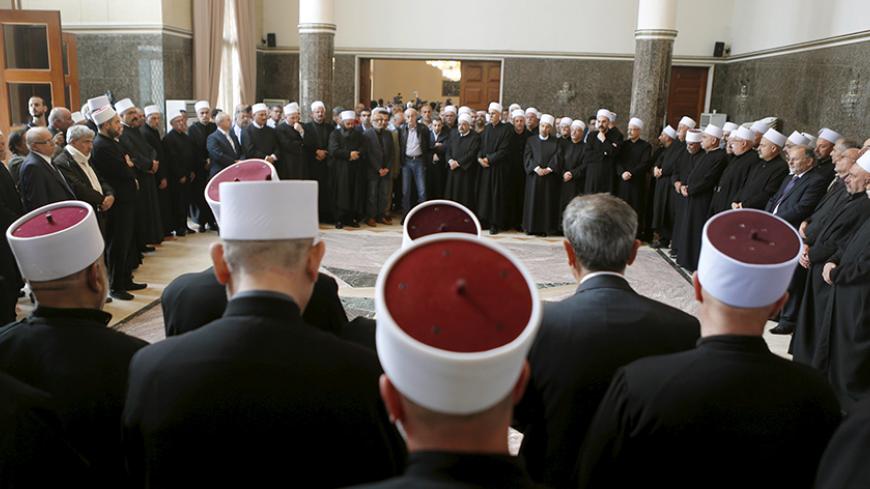 The Druze communities, like other minorities in the Levant, face difficult circumstances today. The regimes that governed them for decades and that granted them freedom in exchange for their loyalty are falling apart. If the Druze maintain their allegiance to them, they could meet the same fate as Iraq's Yazidis and Christians, who have been subjected to abuse and discrimination by the Islamic State (IS).

IS continues to expand, but it also faces competition from other jihadist organizations, among them Jabhat al-Nusra. Such groups are driven by extremist views with no room for pluralism and diversity. Minorities to them are a mere tool in their media wars. They disregard and violate international law established to protect the vulnerable. The war on terror waged by a broad international coalition is moving at a snail’s pace and even stumbling. At this time, the sectarian fires are raging, and amid this explosive situation, the Druze communities know they are the weakest link.

On June 11, Jabhat al-Nusra's massacre in Qalb Lawzah hit like an earthquake, leaving 20 members of the Druze community dead in the countryside of Syria's Idlib province. The incident, which may be an isolated and unplanned incident, sparked anger and panic among the Druze, who make up 3% of the Syrian population.

Prior to the attack, Syrian regime forces had suddenly withdrawn from Idlib. Unable to mount significant resistance, the Druze paid the price for the withdrawal. On June 12, Jabhat al-Nusra quickly repudiated and condemned the crime in an unprecedented move. Regardless, the incident highlighted the precarious situation of the Druze minority, as such a scenario could be repeated in other Levant countries.

Today all eyes are on Quneitra province, adjacent to the Golan Heights. The Druze village of Hadar has been besieged by Syrian opposition fighters since March 2015. A security source familiar with the situation told Al-Monitor on the condition his name not be used, “Idlib’s scenario may be repeated in Hadar. The regime might withdraw, leaving the Druze to face the battle alone.”

The majority of the Druze community in Syria has always supported the regime. They have key staff in public administration, the army and the security services. At the beginning of the revolution in 2011, leading voices among the Syrian Druze called for joining the revolution. Among them are Muntaha al-Atrash, the daughter of Sultan Pasha al-Atrash, a prominent figure in the Great Syrian Revolt of 1925-27 against the French Mandate, and writer Rima Fleihan, among others. However, they were unable to convince the majority of the Druze, living mostly in Jabal al-Druze in Suwayda province, to reconsider their loyalty and join the revolution.

A Druze figure close to the Syrian opposition explained to Al-Monitor on condition of anonymity that this outcome could be related to the dispersion of the opposition and the lack of a modern national project reassuring to the Druze. That said, the Druze became more skeptical with the rise of IS and Jabhat al-Nusra, and the May 27 statements by Jabhat al-Nusra leader Abu Mohammed al-Golani calling on the Druze to “correct”​ their religious beliefs turned skepticism into certainty for many.

Druze leaders in the region are divided over the Syrian crisis and how to cope with the dangers it poses to their community. Some of them, including Wiam Wahhab, head of the Lebanese Arab Tawhid Party, advocate remaining loyal to the regime and continuing to fight alongside it. In June, he suggested the formation of an army and fighting units in Suwayda for self-defense.

On the other hand, after the Qalb Lawzah massacre, Israeli Druze, including Sheikh Maufak Tarif, called on the Israeli government to protect fellow Druze in Syria from the creeping threat of terrorist organizations. Some Druze leaders in Israel are providing aid to arm Druze in Syria, while others criticize the Israeli government for providing medical assistance to Syrian opposition members. In regard to the latter, one might recall the June 22 attack by Druze against an Israeli ambulance transporting wounded Syrians to Majdal Shams, in the Golan Heights. This incident undoubtedly reveals the degree of tension with the potential to flare up and morph into military confrontation.

For some time now, Lebanese Druze leader Walid Jumblatt has been pleading for calm and reconciliation between Sunni tribes and the Druze of Suwayda. He believes that President Bashar al-Assad’s regime will fall, tweeting as much on June 9, when Brigade 52 fell to the opposition. Since the expansion of Jabhat al-Nusra and other extremists in southern Syria, he has been advocating reconciliation and warning of a conspiracy to create a rift between Sunni tribes and the Druze. On June 23, Jumblatt accused the Syrian regime and Israel of stirring up strife by trying to turn the Druze communities and Sunnis against each other.

Jumblatt has held a confrontational stance toward the Syrian regime since the killing of Prime Minister Rafik Hariri in 2005. He rejects any assistance from Israel as well as the option of arming the Druze. He supports the Syrian revolution, and as an advocate of reconciliation between the Druze and Sunnis in southern Syria, he seeks communication with Arab Sunnis.

A Lebanese source following the Druze situation and close to Jumblatt told Al-Monitor on condition of anonymity, “The Druze cannot separate themselves from the Sunnis or the Arab environment for historical and ideological reasons. They both believe in Prophet Abraham.” Regarding the Druze community’s involvement with the Arabs, the source mentioned the example of the Golani Druze, who continue to reject Israeli identity.

Following the Qalb Lawzah massacre, Jumblatt sent envoys to Turkey and Jordan because of Ankara’s influence over some of the Syrian opposition factions, particularly Jabhat al-Nusra, and given Amman’s influence over the dominant forces in southern Syria.

The large-scale migration of Syrian Druze into Lebanese Druze regions following potential clashes could disrupt the balance. There are many kinship ties between the two communities, and numerous Druze families in Lebanon’s Chouf Mountains are related to those in Jabal al-Druze. The Lebanese source explained, however, “The Druze communities of Lebanon are different from those in Syria. They have different political sensitivities and different social fabrics.”

Jumblatt is calling on the Druze in neighboring Syria to support the opposition and to engage with the surrounding community — that is, the Sunnis. Will they take Jumblatt’s advice? The stakes are high, but this is not the first time the Druze have faced the game of nations. The Lebanese source remarked, “They paid a heavy price, but they survived thanks to their will to live and “taqiyah”, which is according to Druze tradition, the dissimulation of one's own faith and belief due to fear.”