Does Israel have moral obligation to defend Syrian Druze? 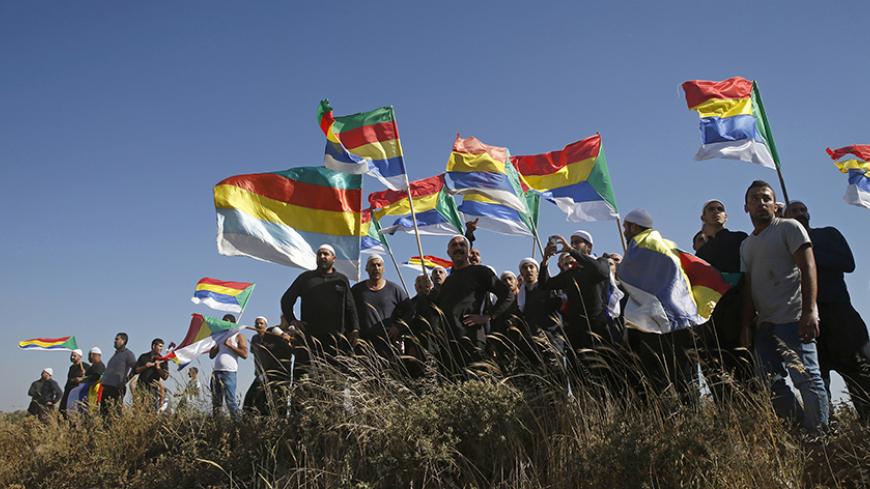 Members of the Druze community watch fighting in the Druze village of Khadr in Syria, as they stand on the Israeli side of the border fence between Syria and the Israeli-occupied Golan Heights, near Majdal Shams, June 16, 2015.

From his home in Beit Jann in the hills of the Upper Galilee, former Deputy Foreign Minister Majallie Whbee, an Israeli Druze, is keeping close tabs on the fighting taking place in the Druze villages of Syria. He's worried. Like so many members of Israel’s Druze community, he has relatives across the border there, and they are facing real danger. According to all reports, the Jabal al-Druze region in general and the town of Suwayda in particular are surrounded by fighters from the Islamic State and Jabhat al-Nusra.

As if that was not enough, it seems that within Israel itself, things are starting to spiral out of control. An ambulance carrying wounded Syrian rebels to Israeli hospitals came under attack by Druze residents of the Golan Heights on June 22. The incident ended with the death of one of the wounded Syrians. The reason for the lynching was the rage that local Druze feel about the humanitarian aid that Israel is providing to wounded Jabhat al-Nusra fighters, who are attacking their brothers in Syria.

Whbee, a lieutenant colonel in the reserves, is trying to be a voice of moderation as his community begins to express its outrage. He hopes that the lynching of the wounded fighters in the ambulance remains an exception and outlier. Meanwhile, he's putting everything he has into the struggle to increase awareness in Israel and around the world about the risk of a massacre occurring in the Druze villages of Syria. To do this, he is using his close ties with the highest echelons of Israel’s political leadership and the close ties he has fostered with regional leaders in his capacity as the European Parliament’s wandering ambassador to the Mediterranean states.

In an interview with Al-Monitor, Whbee said that he recently sent a message to Prime Minister Benjamin Netanyahu and other senior figures in Israel, on behalf of the community in Israel, saying that they must act to help the Syrian Druze. In that message he made it quite clear that the Druze in Israel will not stand by quietly if the worst possible scenario occurs, and the rebel forces attempt to slaughter the Druze community in Syria. “We’re all losing sleep over it,” he emphasized. He also added that according to his knowledge, the rumors concerning Israel's alleged assistance to Jabhat al-Nusra are lies, and part of a disinformation campaign by elements with ulterior motives.

Al-Monitor:  What impact will the incident with the ambulance have on the already tense relationship between the Israeli Druze and the government?

Whbee:  I see it as another violent incident, but not necessarily a turning point. Everyone here condemned the incident, including the leaders of the Druze community. That’s important. It is also important to understand the background of the attack on the ambulance. I believe that the people behind it were Druze with some ties or other to the Syrian government. They get their orders from Syria, as part of the regime’s efforts to show control. I am in daily contact with the Druze in Syria, and sometimes even hourly contact. From what I understand, this was an attempt to show a wave of Druze support, to show that the Syrian government is intervening. In any event, in my estimation, there are very few Israeli Druze left, who still support [Syrian President Bashar al-] Assad.

Al-Monitor:  How should Israel react to incidents like that?

Whbee:  Certainly not with clemency. We are a state that abides by the rule of law. We must deal with every rioter. The prime minister did the right thing by reacting so sharply to the incident. He was establishing boundaries, which must not be crossed.

Al-Monitor:  How do you feel about the coverage of Israeli media of the incident?

Whbee:  What bothers me mostly is the lack of understanding shown by Israel to the issue in general — and more specifically by Israeli officials, who allowed reporters to go to the hospitals to interview the wounded Syrians that the country is helping for humanitarian reasons. The story got picked up by all the major media outlets, including Channel 2, which aired a report in which one of the wounded fighters described how he killed Druze. Why did they have to disclose all that? After all, Israel has been doing it for four years now, without any publicity. The result was that the Druze were outraged that Israel is helping the very people who are slaughtering their brothers and sisters. It created a lot of unnecessary tension, which was one of the factors that led to the lynching of the passengers in the ambulance. The media acted irresponsibly, and that incited the incident with the ambulance. Israel should offer humanitarian aid, but it must keep it low key. Someone forgot that the Druze here have relatives in Syria, and that they are constantly updated about the situation through the social networks. They hear about villages that are surrounded, and they are afraid of another massacre occurring, just like there was in Iraq.

Al-Monitor:  What do you hear about the battles unfolding in Syria, in the areas where the Druze community lives?

Whbee:  An invasion by the Islamic State and Jabhat al-Nusra seems to be now a real threat. Unfortunately, it is only now that Israel is beginning to understand how dangerous it is for the Islamic State to spread in the region. As I see it, Israel’s leadership took time to wake up to the threat. At first, they were excited to see the Assad regime collapsing. They didn’t realize what would come to replace it. It is clear to me that Israel is the next target after Syria. Given that, what happened to the Yazidis and the Christians must not be allowed to happen to the Druze. Some people claim that the civil war in Syria will last years. In that case, Israel must take a deep breath and have its forces on the alert. If Bashar al-Assad falls in the near future, the IDF [Israel Defense Forces] must be ready for much more extensive defensive measures along the border.

Al-Monitor:  What is now the situation of your Druze family members in Syria, how do they feel?

Whbee:  They have managed to defend themselves so far. They know how to defend themselves and have prevented an invasion of Jabal al-Druze. They are very brave and highly trained soldiers, and the population is managing to hold on. I have cousins there, and the situation is hardly pleasant. I am in contact with them, and I am worried, because I know what the Islamic State and Jabhat al-Nusra are capable of doing. Of course I will not stand idly by if something does happen, and it is not just me either. There are thousands of IDF officers with relatives there. For now, I won’t say what we are capable of doing, but I want it to be perfectly clear. We have ways of acting on our own as well.

Al-Monitor:  How do you think Israel should react?

Whbee:  I am not getting into that right now. It is clear to me that we cannot sit idly by. There are plenty of ways to help now. The State of Israel knows how to help Jews in trouble in every country in the world, no matter how remote, and I expect it to do the same for us. We are citizens of this country. We serve it and fight for it. If our Druze brothers and sisters are being threatened with a massacre, it is a moral responsibility to help them. I have relayed that message to everyone I could.

Al-Monitor:  Do you think that your call to action was heard in Israel and elsewhere?

Whbee:  Our demonstrations in the Golan Heights reverberated around the world. Everyone has now heard about the threat of a massacre, and that is important, since it ensures that the international community will not fall asleep on its watch. As far as the government of Israel is concerned, I did not ask the IDF to enter Syria. At the same time, I want to make it clear that Israel, along with the United States and the Western nations, must act if the situation deteriorates. The State of Israel has enough power of deterrence even without entering Syria. I am talking to whomever I have to, and it even reaches up to the prime minister. I feel that this is a state of emergency, and I must not be complacent. Under no circumstances will there be an attempt to exterminate our people, without our taking a stand.