Will Israel reach out to Syrian Druze?

Israel fears getting entangled in the Syrian civil war, but might find it difficult to categorically refuse to help the Syrian Druze community. 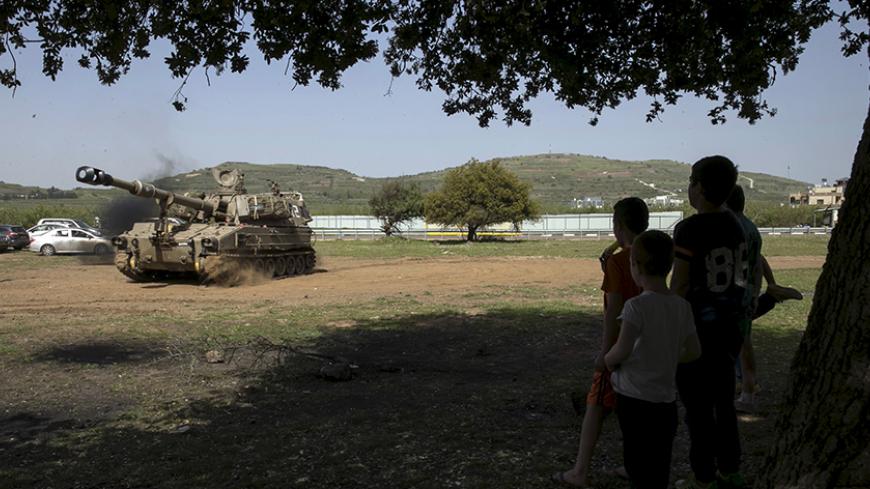 While Israel is gearing up for the “day after Assad,” without knowing what that day without President Bashar al-Assad will bring, Israel’s neutrality with regard to the civil and ethnic war in Syria is being challenged by an interesting turn of events. In the past few weeks, the heads and leaders of the dominant Druze sect in Israel have turned to Israeli authorities with the request to extend help to the hundreds of thousands of Druze in Syria. These Druze are very concerned about the steady advance of the Islamic rebels toward Jabal al-Druze, or Mount Druze, where the majority of Syrian Druze are concentrated.

The contacts were conducted so quietly that were not revealed until June 12 in the Israeli daily Haaretz. The Druze are characterized as being loyal citizens of the central regime of the country in which they live. The Druze, who are dispersed across Syria, Lebanon and Israel, are viewed as an especially close-knit community that maintains tight cultural and familial connections, despite the borders and even wars that play a role in separating their various population centers in the Middle East. They tend to settle and establish their villages on high, mountainous areas, to improve their self-protection and defense capabilities. In Lebanon they are concentrated around Mount Lebanon and in Syria, at Jabal al-Druze, as well. Most of the Druze villages in Israel are located in the mountainous Galilee region.

There are about 136,000 Druze in Israel today; they signed “a covenant of blood” with the Jews even before the establishment of the State of Israel, taking part in Israel's wars and battles. They have sacrificed their youngsters in Israel's defense. Thus, they are viewed as patriotic Israelis. Members of the Druze community serve in the Israel Defense Forces (IDF) and rise to high-level command positions; the conscription percentages among the Druze minority (those who are Israeli citizens are drafted, unlike Golan Heights Druze, who are not drafted) are even higher than that of Jewish Israelis. On average, 83% of them serve in the IDF, compared with 75% among Jewish Israelis.The military cemeteries are full of graves of Druze soldiers. In short, the vast majority of the Israeli Druze identify themselves with the State of Israel.

When Israel conquered the Golan Heights in 1967, about 20,000 additional Druze, residents of the Heights, found themselves living in Israeli territory. In contrast to their Israeli-Druze brethren, most of the Golan Heights Druze remained loyal to Hafez al-Assad’s regime and refused to accept Israeli citizenship, even though it was offered to them. Nevertheless, and despite their strong affiliation to Syria and their refusal to take Israeli citizenship, good relations and mutual trust prevailed between the Druze in the Golan Heights and the Israeli authorities.

By contrast, the Druze in Syria were long viewed as especially loyal subjects of Hafez al-Assad's regime; this remained true even after his death and the rise of his son Bashar al-Assad to the presidency.

In recent months, the various rebel groups in Syria began to approach Jabal al-Druze in the country’s south, not far from the border with Jordan. The advance axis extends in two directions: from the west, where rebel groups, including al-Qaeda affiliated Jabhat al-Nusra, are pressing forward to Jabal al-Druze, and from the east, where the rebels have scored numerous victories over Assad’s army.

The eastern axis is the most threatening, since the Islamic State (IS) is involved and IS combatants show no tolerance for anyone different than them. Assad’s army lost several important strongholds in the region and the general impression among Western intelligence sources is that Assad has sacrificed his rule over this non-essential region, and rejected the demands of the Druze community to continue to protect them. Currently, Assad is focused on establishing a new line of fortifications east of Damascus in an effort to halt the advance of the rebels toward the capital city.

There is ample reason to fear that the rebels will attempt to settle accounts with the Druze for two reasons: their longstanding fidelity to the Assad family, and also because they are not viewed as Muslims. On this background, deep worry has spread among the Israeli Druze that is expressed in well-attended rallies and appeals to diplomatic and military entities with the request that Israeli assistance be extended to the Syrian Druze. Among the personages active in this issue is Deputy Minister for Development of the Negev and Galilee Ayoob Kara, a member of the Druze sect and a long-standing Likud member. In addition to Kara, many Druze officials, including former elite IDF officers, have held negotiations with the highest echelons of Israel’s diplomatic and security systems. They are trying to convince Israel to extend humanitarian, economic and perhaps even military aid to their brethren in Syria.

After much consideration and vacillation, Israel was forced to reject these appeals. At least officially. Ever since the eruption of the confrontations in Syria, Israel has made significant efforts to retain its neutrality and not get embroiled in this struggle for the benefit of either side. Current Israeli intelligence assessment is that the various forces fighting in Syria have no interest in dragging Israel into the fracas. “The moment we step foot into this mayhem,” a senior Israeli military source told me this week on condition of anonymity, “we will become part of the fray and we’ll become associated with one side or another. We have no interest in this.”

According to various media reports, Israel is pursuing secret contacts with some of the rebel groups in Syria, mainly those that are not identified with radical Islam (al-Qaeda or IS). The talks remain confidential, and leaks are rare. Apparently, they do not include official or significant military assistance.

Israel is keeping close tabs on what is going on in Syria and in the last two years, Israeli intelligence has intensified its intel-gathering efforts among the various rebel groups. This is done in preparation for what is now viewed in Israel as the inevitable termination of the Assad era, and the end of Syria as one recognized sovereign unit. Yet the supreme Israeli interest was, and remains, keeping its distance from the Syrian turmoil as much as possible, so as not to give any of the groups involved an excuse to drag Israel into the war.

On June 10, outgoing US Chairman of Joint Chiefs of Staff Gen. Martin Dempsey paid a farewell visit to Israel. During the talks he held here, Dempsey heard the Israeli concern over the fate of the Syrian Druze. His Israeli interlocutors asked him to pass on the Druze plea to take action in order to avert a massacre of Druze by radical Islamist groups. Dempsey promised to relay the concerns to Washington. Nonetheless, no one in Israel (Druze or non-Druze alike) fools himself or toys with the hope that the American army will land on Jabal al-Druze anytime soon to save the embattled Druze.

Simultaneously, the Druze themselves are attempting to reach understandings with various rebel groups to declare the Druze villages in southern Syria as neutral territory, out of bounds. At this stage it is unclear how successful the negotiations are and to what extent understandings, should they be achieved, will be implemented on the ground at the moment of truth.

Israel hopes that the Druze worries will remain only on paper, and will not turn into a humanitarian nightmare. No one has forgotten the sights and sounds connected to the fate of Yazidi villages in Iraq not long ago. Should such sights repeat themselves in the Druze villages in Syria, it will be very hard if not impossible for IDF authorities and Israeli political echelons to turn their backs on the demand of Israeli Druze to extend aid to their brethren being slaughtered. Israel has a recognized historic record of assistance to any and every Jew who gets into trouble anywhere in the world. The Druze will rightfully demand equal rights in this realm too. They are Israeli citizens, they are joined by “a covenant of blood” with the state, and the state ought to behave the same way with the Druze as it would with Jews who are in danger.

In the event that such a scenario should emerge, the Israeli dilemma will intensify. At the moment, the only thing under discussion is a humanitarian corridor that will allow potential Druze refugees to receive refuge and medical treatment in the Golan Heights. And by the way, even rebel combatants are already being treated and hospitalized in a military hospital that was erected in the Golan Heights, and in civilian hospitals in the country’s north. Hence, if Israel would not be able to preserve its neutrality, consequences might be dire.