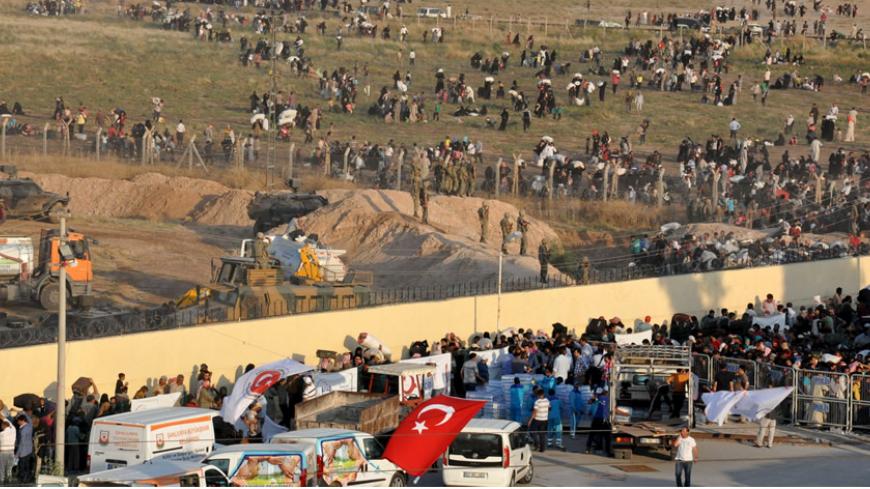 Syrian refugees from Tell Abyad (foreground) line up at the border crossing as others wait behind the fences to cross into Turkey at the Akcakale border gate in Sanliurfa province, Turkey, June 14, 2015. - REUTERS/Kadir Celikcan

Turkish President Recep Tayyip Erdogan is reportedly angered by the victory June 15 of Syrian Kurdish and rebel fighters over Islamic State (IS) forces in Tell Abyad, a Syrian town close to the Turkish border.

The influx of more than 23,000 Syrian refugees to Turkey as a result of the latest fighting brings the total number to nearly 1.8 million, the most Syrians hosted in any country, according to the United Nations High Commissioner for Refugees.

Fehim Tastekin wrote June 14, “Erdogan’s anger with the operation to oust IS from the region became evident when he said on June 11, ‘The West, which is hitting Arabs and Turkmens of Tell Abyad from the air, is sadly settling the PYD [Democratic Union Party] and PKK [Kurdistan Workers Party] terror organizations in their places.’”

While it may be baffling to most observers to understand how anyone could consider the defeat of IS by non-government, non-Islamist Syrian forces a bad thing, the Turkish president’s responses are actually more consistent than not, as readers of this column know well. Erdogan had similar reactions during IS’ siege of Kobani last year. His Syria and Kurdish policies have contributed to the declining fortunes of his Justice and Development Party (AKP), which lost more than 50 seats in the parliamentary elections June 7, as analyzed here last week.

Tastekin continued, “Erdogan claimed Kurds are being settled in areas abandoned by Arabs and Turkmens during the aerial bombing by the Western coalition. In September and October 2014, when IS was besieging Kobani, Erdogan's declaration — sounding like he was delivering good news — that 'Kobani is about to fall' infuriated Kurds. This may help explain his total loss of Kurdish regions in the June 7 elections. Now the question being asked is why Erdogan seems to be so concerned about the possible IS loss of Tell Abyad?”

Tastekin also points out that US President Barack Obama said June 8 that Turkey could be doing more to crack down on foreign fighters entering Syria. Obama said, “The other area where we’ve got to make a lot more progress is on stemming the flow of foreign fighters. Now, you’ll recall that I hosted a U.N. General Security Council meeting specifically on this issue, and we’ve made some progress, but not enough. We are still seeing thousands of foreign fighters flowing into, first, Syria, and then, oftentimes, ultimately into Iraq.

"And not all of that is preventable, but a lot of it is preventable — if we’ve got better cooperation, better coordination, better intelligence, if we are monitoring what’s happening at the Turkish-Syria border more effectively. This is an area where we’ve been seeking deeper cooperation with Turkish authorities who recognize it’s a problem but haven’t fully ramped up the capacity they need. And this is something that I think we got to spend a lot of time on.

"If we can cut off some of that foreign fighter flow then we’re able to isolate and wear out [IS] forces that are already there. Because we’re taking a lot of them off the battlefield, but if they’re being replenished, then it doesn’t solve the problem over the long term.”

In an exclusive video obtained by Al-Monitor, an IS fighter captured by Syrian forces detailed, through his personal recruitment story, the often porous border between Turkey and Syria.

Amberin Zaman reports that prisoner and Turkish citizen Huseyin Mustafa Peri stated that the way into Syria “was an easy affair: ‘Ibrahim Osama had given me a number. … I was told to go to [the southern border province of] Gaziantep.’ Once in Gaziantep, Peri was taken in turn by taxi and minibus to the Syrian border. ‘I was with three or four Indonesians and three Uighurs,’ he recalls. ‘The smuggler told us to run fast. … I saw no soldiers. … I just ran for 50 meters [164 feet] and encountered no problem.’”

The toll of Erdogan’s divisive policies, on both Turkey’s international standing and the AKP’s declining support within the country, has not escaped the attention of one of the founding members of the AKP, Turkey’s former President Abdullah Gul.

A recent book by Ahmet Sever, the former spokesman for Gul, has revealed the former president’s disagreements with Erdogan and may foreshadow Gul’s return to politics.

Cengiz Candar reports that one story from the book that “made a ‘bombshell blast’ within AKP ranks is Gul’s disclosure of his intent to re-engage in active politics in order to correct what he sees as fatal mistakes. About a year ago, he expressed an extreme discomfort about the way the AKP government was handling Turkey’s mounting problems.”

Semih Idiz writes that Gul’s potential return to politics could help address several of Turkey’s issues: “Many Turks who do not support the AKP would be more at ease with an AKP-led coalition headed by Gul, given his position on democracy, which contrasts sharply with Erdogan's. Gul is also keen on Turkey’s bid for membership in the European Union. His supporters argue that he would return Turkey to its traditional foreign policy and abandon those that have left the country isolated and with little say over regional issues.”

IS sets fires in Kobani

IS may have lost control of Kobani to Syrian Kurdish forces, but it continues to terrorize the town’s citizens.

Massoud Hamed reports from Kobani, “Massive fires broke out in early June in the agricultural areas of this Kurdish-majority city, affecting wheat and barley crops and fruit trees. [IS] used heavy weaponry to target these areas following its late January defeat in Kobani at the hands of Kurdish forces and the international coalition.”

Hamed continues, “The city of Kobani, which comprises an area of about 2,700 square kilometers (1,042 square miles), continues to face the problem of crop fires, which frightens the city’s residents and prevents them from returning. It has even led to a reverse migration from the city, especially since the residents depend on agriculture for their livelihoods, particularly wheat, barley and cotton. About 4,000 acres have been burned since the beginning of 2015, which causes severe hardship to the area's residents who depend on agriculture for survival.”

Israel’s Druze community is lobbying the Israeli government to support its Syrian co-religionists threatened by jihadist groups in Syria.

The approximately 130,000 Israeli Druze are considered trusted citizens who serve in the military. Syrian-origin Druze communities in the occupied Golan Heights, however, have historically maintained their loyalty and sympathies to Syria and the Syrian government.

Like other minorities in Syria, the Druze, which number approximately 650,000 or roughly 3% of Syria’s population of 22 million, consider the Syrian government as their only and best defense against radical jihadists. The al-Qaeda-linked Jabhat al-Nusra group recently killed at least 20 Druze near Idlib, in northwest Syria, and further deadly attacks are likely. This column has repeatedly warned of an alarming campaign to mainstream Jabhat al-Nusra as part of some preposterous rationale to weaken the Syrian government.

Ben Caspit writes that the concerns of its Druze population further complicate Israel’s Syria policy: “Israel is keeping close tabs on what is going on in Syria and in the last two years, Israeli intelligence has intensified its intel-gathering efforts among the various rebel groups. This is done in preparation for what is now viewed in Israel as the inevitable termination of the Assad era, and the end of Syria as one recognized sovereign unit. Yet the supreme Israeli interest was, and remains, keeping its distance from the Syrian turmoil as much as possible, so as not to give any of the groups involved an excuse to drag Israel into the war.”

Caspit continues, “Israel hopes that the Druze worries will remain only on paper, and will not turn into a humanitarian nightmare. No one has forgotten the sights and sounds connected to the fate of Yazidi villages in Iraq not long ago. Should such sights repeat themselves in the Druze villages in Syria, it will be very hard if not impossible for IDF [Israel Defense Forces] authorities and Israeli political echelons to turn their backs on the demand of Israeli Druze to extend aid to their brethren being slaughtered. Israel has a recognized historic record of assistance to any and every Jew who gets into trouble anywhere in the world. The Druze will rightfully demand equal rights in this realm too. They are Israeli citizens, they are joined by “a covenant of blood” with the state, and the state ought to behave the same way with the Druze as it would with Jews who are in danger. In the event that such a scenario should emerge, the Israeli dilemma will intensify. At the moment, the only thing under discussion is a humanitarian corridor that will allow potential Druze refugees to receive refuge and medical treatment in the Golan Heights. And by the way, even rebel combatants are already being treated and hospitalized in a military hospital that was erected in the Golan Heights, and in civilian hospitals in the country’s north. Hence, if Israel would not be able to preserve its neutrality, consequences might be dire.”