Since the Islamic State was defeated in Kobani in January, the group has been setting ablaze the crops of the residents there. 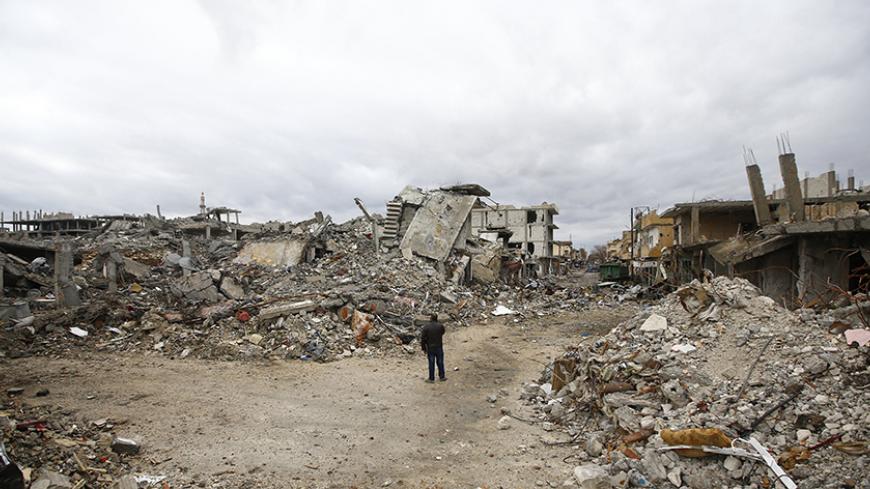 A man walks past destroyed and abandoned buildings in Kobani, Jan. 30, 2015. - REUTERS/Osman Orsal

KOBANI, Syria — Massive fires broke out In early June in the agricultural areas of this Kurdish-majority city, affecting wheat and barley crops and fruit trees. The Islamic State (IS) used heavy weaponry to target these areas following its late January defeat in Kobani at the hands of Kurdish forces and the international coalition.

Setting these fertile lands ablaze is one of the attempts by IS to intimidate the citizens who returned to Kobani after the group’s departure from the city.

“IS emptied the Kobani countryside and Tell Abyad of its original Kurdish residents through a systematic policy that has been applied since the beginning of the attack on these Kurdish cities in 2013," Zara Misto, editor-in-chief of Welati Net and its office director in Kobani, told Al-Monitor. "This was done either through military tactics that converted the countryside into a military zone or through burning crops. Six thousand Kurdish families have been displaced from these areas. After the defeat of IS in Kobani and until now, the group’s bomb attacks and fires in many villages have hindered the return of residents to their towns. IS is even rigging children’s toys with explosives, resulting in only a very small number of residents returning — about 10% [of those who left]. This is because the return of residents and life to Kobani is akin to a monumental defeat to this terrorist organization.”

The residents of Kobani are living in a volatile environment; sometimes they are faced with the threat of death and destruction of the city, and other times they see their crops being set on fire.

The leadership of the Kobani Canton, formed on Jan. 27, believes that IS is targeting agricultural fields to intimidate civilians.

“On April 20, we communicated with the owners of agricultural lands, in particular farmers in the western and southern region who were confronted by IS, to find urgent solutions to [the destruction of] crops," Anwar Mosallem, head of the Kobani Canton executive body, said in a statement to Al-Monitor. "Necessary procedures were taken to distribute fuel to landowners at low and subsidized prices so that they could farm the land, which amounts to millions of acres. On the other hand, measures were taken by the Kobani municipality. While the latter lacks a sufficient number of fire trucks, it is putting out fires within its present capacities. We call on international organizations to provide support to the region, to find a solution to the issue of the fires. Currently, there is a proposal by the Agricultural Body (affiliated with the municipality) to support farmers who had their land burned, by distributing oil and bags for wheat and barley.

"The circumstances of this year in particular are different. We are facing a terrorist organization that is despised globally, thus IS is resorting to all terrorist methods and means to fight the Kurdish people. It usually follows a scorched earth policy against us. As a result of its repeated defeats and suffering one blow after another from our forces, it is now resorting to targeting [agricultural] fields behind our lines of fighters using weapons to set the crops alight. [IS] is trying to preoccupy [our] fighters with the fires instead of the confrontation [with IS]. Each fire caused by IS came from behind our line of fighters. If we take into account the direction of the wind — which blows from west to east — we realize that these fires place our fighters, who are on the front line, between IS in front of them and the fires the group has set behind them.”

The Kurdistan Democratic Party of Syria reported May 28 on its website that Kurdish forces and forces allied with them were responsible for the fires. The report claimed that these operations were systematically applied by the People’s Protection Units and their allies, stemming from a policy aimed at avenging the citizens and expelling anyone who does not support their ideas.

In light of these accusations, the Shams al-Shamal Brigade, a military force affiliated with the Free Syrian Army (FSA) and allied with the Kurdish People’s Protection Units, issued on May 25 a statement on social media categorically denying these charges.

Since Kobani was attacked in September 2014, it has been abandoned by the majority of its inhabitants, leaving mostly militants in the city.

The city of Kobani, which comprises an area of about 2,700 square kilometers (1,042.5 square miles), continues to face the problem of crop fires, which frightens the city’s residents and prevents them from returning. It has even led to a reverse migration from the city, especially since the residents depend on agriculture for their livelihoods, particularly wheat, barley and cotton.

About 4,000 acres have been burned since the beginning of 2015, which causes severe hardship to the area's residents who depend on agriculture for survival.