A Turkish citizen who joined the Islamic State in September and was captured in early June by Syrian Kurds explained IS' induction process with chilling clarity in a video shared exclusively with Al-Monitor. 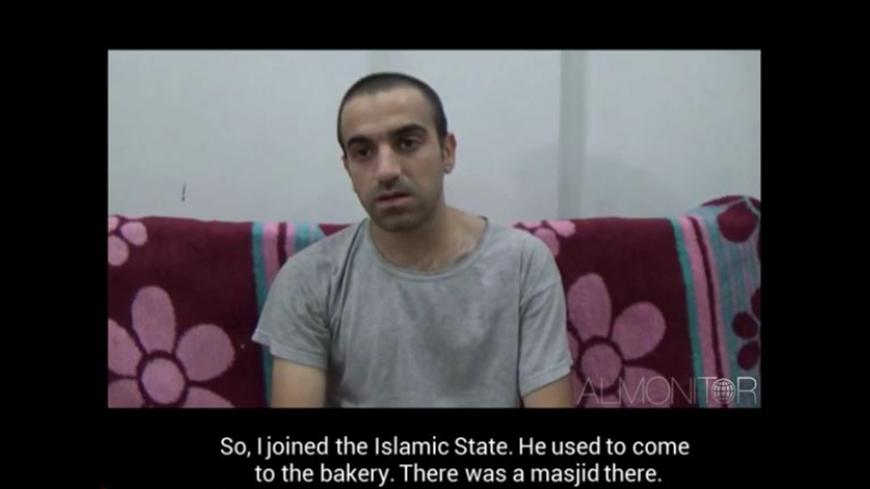 Screenshot of interview with Turkish citizen Huseyin Mustafa Peri, who was captured by the People’s Protection Units. -

When Syrian Kurdish fighters of the People’s Protection Units (YPG) closed in on their Islamic State (IS) rivals in Tell Abyad, a strategic jihadist stronghold, thousands of civilians flocked to the Turkish border in scenes repeated since the Syrian conflict erupted four years ago. At first, Turkey, already home to nearly 2 million Syrian refugees, balked and fended them off with water cannon. Under a barrage of international criticism, the Turkish authorities relented. By the time the YPG declared victory at Tell Abyad on June 15, at least 23,000 Syrian refugees were thought to have crossed into Turkey, some illegally. Thousands more are expected to follow and the big question is not so much how Turkey will cope with the added burden, but how many IS militants are lurking in their midst.

According to Turkish media reports, Turkish security forces caught several IS fighters as they tried to slip into Turkey from Tell Abyad. “It is pretty certain that IS fighters crossed into Turkey via Tell Abyad,” said Aymenn Jawad Al-Tamimi, an analyst who monitors jihadist groups for the Middle East Forum, a Philadelphia-based think tank. “They have already got a shadow presence [in Turkey], and having a presence amid the refugee population will be of benefit to them,” he added in an electronic interview with Al-Monitor.

The IS presence in Turkey may be more than just a “shadow.” A flurry of investigative reports by leading international outlets, including Al-Monitor, suggest that the jihadist recruiters and their sympathizers move freely in cities like Istanbul, Ankara and Konya. “Turkey is a fertile breeding ground for IS and other extremist groups,” said Levent Gultekin, a former Islamist commentator, in an interview with Al-Monitor.

Huseyin Mustafa Peri, a Turkish citizen who joined IS in September, was captured in early June by Syrian Kurds after being shot and wounded in Tel Hamis, a border town east of Tell Abyad. He explained the recruiting process with chilling clarity in a video that was shared exclusively with Al-Monitor on the strict condition that its source not be revealed because of the sensitive nature of its content.

Al-Monitor was unable to independently confirm either the man’s identity or the circumstances of his captivity. Al-Monitor’s request to interview the jihadist, who is being held by the YPG in Syria, was rejected on security grounds. Yet much of what Peri describes, including a newly formed all-Turkish IS unit called “Saiful Islam,” aligns with some of Al-Monitor’s own findings.

Peri is a 25-year-old university dropout from Adiyaman, a predominantly Kurdish province in southeast Turkey, where Islamic fraternities have long held sway and sympathy for IS is said to be on the rise. He says he first rubbed shoulders with the jihadists in between stints working at a bakery in Gungoren, a low-income district on the European side of Istanbul. Many of them congregated at a "masjid," a prayer hall, above the bakery.

“I met a person called Ibrahim Osama. … He told me things and I listened,” Peri said. “He had … a peculiar way of dressing — like he grew a beard, wore cargo pants and grew his hair. His appearance was what we would call the Islamic State type.” His indoctrination began with Osama recommending a number of religious texts to Peri. They included books written by ideologues of the Muslim Brotherhood.

Peri says he was "surprised" when he learned that Osama was a member of IS "because there is a significant discord between them and the Muslim Brotherhood.” IS views the Brotherhood as "takfiris," or apostates. Osama invited Peri to join IS. By September, Peri had agreed.

On a recent afternoon, Al-Monitor went to Gungoren to investigate Peri’s claims. The first stop was a local real estate agent called Huseyin Demir, a Kurd with a reputation for having his ear to the ground. Demir confirmed that Gungoren was “full of Syrians,” saying, “They mostly live in basements or ground floors. I stopped doing business with them because I couldn’t tell what their backgrounds were,” he told Al-Monitor. Had he seen any jihadist types around? Demir said he had seen a group of some 30 young men who “looked like jihadists” rush past his office the day before.

“I couldn’t tell why they were running or who they were,” Demir said. “There has been a fresh influx of Syrians since the YPG moved onto Tell Abyad.” Jogging jihadists? What about the masjid and the bakery? Demir hadn’t heard of either. But there was a place “where IS types used to gather.”

Armed with directions and with Yilmaz Yucel, a member of the pro-Kurdish Peoples’ Democratic Party (HDP), as a guide, the quest began for Peri’s bakery and masjid. It quickly emerged that the masjid was located at the headquarters of an Islamic association called Hisader. The association made headlines in June 2014 after locals complained that it was luring their children to fight in Syria.

Hisader’s alleged modus operandi was to use its operatives to get vulnerable youths hooked on drugs. The association would then help them kick the habit. Osama, who was said to earn his living as a milkman, was mentioned in the media reports.

Yilmaz confirmed that narcotics were easily available in Tozkoparan, a dicey part of Gungoren also known as “Cuba.” The Turkish media routinely carry stories of police seizing large amounts of drugs in Gungoren. The high number of luxury cars, including Porsches, BMWs and Mercedes convertibles cruising through the streets of Gungoren hinted at incomes different from those earned by the district’s large population of textile workers.

In July, the authorities ordered Hisader to shut down. The apartment where it was situated, in a nondescript building in Haznedar, is now empty, its windows covered with old newspapers. On the ground floor, however, a bakery called “Besliogu Unlu Mamulleri” is doing brisk business. Its owners are from Adiyaman, like Peri. When shown his photograph, they said they had never seen him before. “We took over this business only four months ago,” said a man with grizzled hair and a blind eye who appeared to be in charge. When pressed for contact details for the previous owners — a family from the Black Sea province of Trabzon — he grew evasive, then hostile and motioned Al-Monitor out of the store. The owner of a stationery shop next to the bakery was no more forthcoming. “I don’t know anything,” he said.

None of this controversy apparently deterred Peri, who in November made his journey to Syria and IS. It was an easy affair: “Ibrahim Osama had given me a number. … I was told to go to [the southern border province of] Gaziantep.” Once in Gaziantep, Peri was taken in turn by taxi and minibus to the Syrian border. “I was with three or four Indonesians and three Uighurs,” he recalls. "The smuggler told us to run fast. … I saw no soldiers. … I just ran for 50 meters [164 feet] and encountered no problem."

Turkey has been repeatedly rebuked for its perceived indifference to foreign fighters who enter Syria through Turkish territory. US President Barack Obama conveyed his frustration on the sidelines of a G-7 summit in Germany in early June, saying, “Not all of that [flow] is preventable, but a lot of it is preventable — if we’ve got better cooperation, better coordination, better intelligence, if we are monitoring what’s happening at the Turkish-Syria border more effectively. This is an area where we’ve been seeking deeper cooperation with Turkish authorities who recognize it’s a problem but haven’t fully ramped up the capacity they need.”

Turkish officials disagree. They insist that much of the blame lies with the countries the foreign fighters originally travel from. “For a foreign terrorist fighter, or FTF, Turkey is the last stop before the destination point in a journey that should not begin at all,” said a Turkish diplomatic source who spoke to Al-Monitor on strict condition of anonymity. “In terms of burden-sharing, one needs to see that while a source country has the responsibility to stop few hundred FTFs, Turkey is expected to stop thousands of them.”

As of the beginning of June, Turkey had deported more than 1,400 suspected foreign fighters based on a “no entry” list that it began compiling in 2011. “More than 5,000 of the names on the list were added in 2014 alone, which points to enhanced international cooperation in terms of information-sharing, which was nonexistent in the years before that,” the official noted. Enhanced passenger screening and security checks along the Syrian border prevented 650 suspects from entering Turkey last year.

Western diplomats agree that Turkey has been doing more to prevent foreign fighters from transiting through the Turkish border. But as Peri’s account suggests, it may be doing less to stop its own citizens from joining the jihadists.

The Turkish unit that Peri was assigned to was led by an “emir” whose nom de guerre was Abu Osama al-Kurdi. An ethnic Kurd from Konya in central Anatolia, Kurdi had fought in Afghanistan. He “was the general emir," Peri recalled. "He also decided how the units were divided, like ‘Ten people go here and 10 people there.'” Kurdi’s brother Abdussalam was also part of the brigade. “He was the military emir, that is, the person who commanded us militarily.”

"The average age of the [fighters in the] Turkish unit was 20 to 22," Peri related. They had hardly any military experience, yet they were sent into battle after a mere two weeks of training. “No one knew how to fight,” he said, and some were “martyred in no time at all.”

Some had come after “doing some research, like me,” Peri said. Others had attended madrassas in Konya, where several prominent jihadist imams are said to preach. Peri named several “masters,” including Aladdin Palevi, a Kurdish preacher who unabashedly exalts jihad to spread the Islamic faith. In an essay titled “The Concept of Jihad,” Palevi writes, “Jihad protects the fortress of Islam, the property, honor, the blood of Muslims. … Consensus has no place in the laws of Allah.”

Atilla Kart is a former lawmaker from Konya for the main opposition Republican People’s Party who has been documenting Turkey’s alleged support for radical groups in Syria. He said several constituents whose sons had joined jihadists in Syria had approached him. Like Peri, they were believed to have crossed the border near Gaziantep. “I shared all the information with the local security officials,” Kart told Al-Monitor in a telephone interview. “They didn’t lift a finger,” he claimed.

Another big worry is that radicalized youths will return home and spread their ideology — and violence. The June 5 twin bomb attack on a HDP rally in Diyarbakir that left four people dead and scores wounded has been blamed on a Kurd who allegedly fought for IS in Syria.

Back in Gungoren’s Guven neighborhood, a small group of men with long hair, flowing beards and wearing identical T-shirts and cargo pants chat in Arabic over glasses of tea at an outdoor cafe facing a shiny new mosque. Several get up and head through a narrow alley toward a street called Calislar. They stop in front of a small ground-floor unit with darkened windows. Number 26A, to be precise. A white minibus with similarly shaded windows is parked outside. The appearance of the men is “what we could call the Islamic State type.”