Who is killing Syrian opposition figures in Aleppo, Idlib?

The armed opposition in Aleppo and Idlib has been facing a series of assassinations and assassination attempts, as some leaders accuse the regime and IS of being behind them. 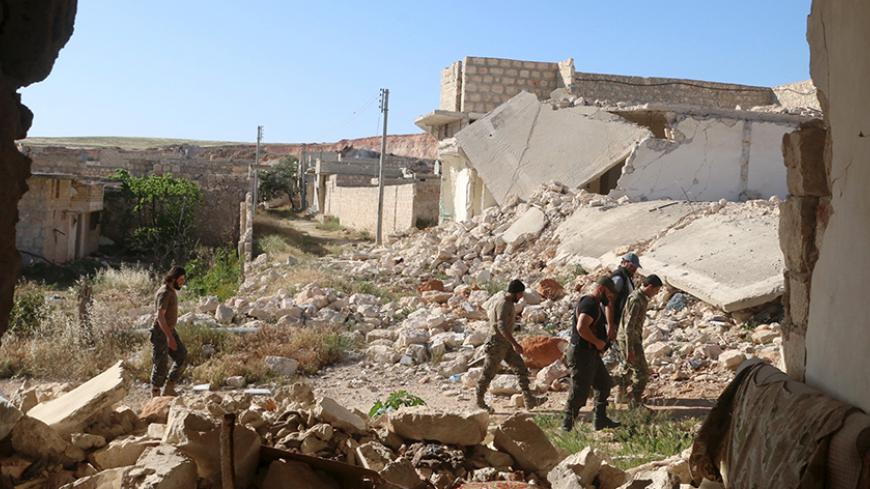 ALEPPO, Syria — Areas under the control of armed opposition factions in northern Syria have devolved into a state of lawlessness leading to militant cells — perhaps affiliated with the regime or the Islamic State (IS) — attempting to assassinate prominent military and media personalities in an unprecedented manner. In June, a number of assassination attempts targeted military leaders from various armed factions operating in the northern Syrian cities of Aleppo and Idlib; there also were attempts to assassinate independent journalists in Aleppo with explosive devices or guns.

Between June 15 and June 22, numerous assassination attempts perpetrated by unknown persons took place against military leaders and press figures. On June 15, an explosive device targeted and killed Abu Ali Muhajireen, a Jabhat al-Nusra commander in the city of Idlib. In addition, unknown assailants shot at — but failed to kill — the commander of the Handarat military command in Aleppo’s northern countryside, Mayof Almayof, upon his return to the city of Aleppo at dawn June 15.

In this context, Almayof, known as Abu Bahr, the military leader of one of the largest factions in Aleppo and its countryside, the Nureddin Zengi Brigade, told Al-Monitor, “My vehicle broke down as I returned from the al-Rabat area inside the Handarat camp at Aleppo’s northern gate, accompanied by a leader of the Nureddin Zengi Brigade, so we stopped for repairs. A few minutes later a motorcycle approached with two masked men who opened fire on us. We tried to take cover behind the vehicle and returned fire, leading to the assailants taking flight. We were not hurt, but were unable to identify the perpetrators because of the darkness and the fact that they wore masks.”

He said, “No one — except the regime and IS — has any interest in assassinating military leaders. The regime failed to advance along Aleppo’s front lines, and specifically in the Handarat camp and al-Malah region. As a result, it is trying through sleeper cells located in the liberated areas to target field commanders and destabilize those areas by taking advantage of the armed factions’ preoccupation with military operations taking place in Aleppo and its countryside — where key battles are raging against the regime, IS and the Syrian Democratic Forces [SDF]. Consequently all our forces are fighting on the fronts, leading to a weakened security situation in the liberated areas, exacerbated by a lack of adequate security coordination among the armed factions.”

Abu Bahr added, “These factors lately has led to the rise of regime and IS sleeper cells bent on executing their plans. We — as militant factions — started implementing urgent and swift measures to address the lack of security spreading throughout the liberated areas of northern Syria. These measures include checkpoints at the entrances of the city and sensitive areas, and increased security coordination between military factions operating in Aleppo and Idlib.”

Assassination attempts were not confined to military leaders alone. Late at night on June 16, Aleppo was the scene of a bomb blast that targeted one of the most prominent independent journalists of the Syrian revolution, Hadi Abdullah, and his colleague Khaled al-Essa. Unknown assailants planted an explosive device in the lobby of their building in the east Aleppo neighborhood of al-Shaar, which led them to suffer severe injuries that required specialized care at one of Aleppo’s field hospitals. They could not be stabilized and they were immediately transferred to a Turkish hospital. Essa succumbed to his injuries June 25.

Aleppo media activist Mujahid Abu al-Joud told Al-Monitor, “We in Aleppo are passing through a sensitive period, due to the many incidents taking place in the city and its countryside that require a constant and organized level of media propaganda. There are those who want to extinguish the voice of the Syrian revolution and exterminate those who endeavor to convey its image to the world, either by assassinating media activists or forcing them to emigrate. We have no idea who stands behind the assassination attempts taking place right now. But some militant factions have been infiltrated by regime or IS sympathizers, which explains the assassination attempts targeting military leaders and media activists in Idlib as well as Aleppo. Media activists have always been targeted by the regime and IS, and the assassination attempts against them lately are a clear indication of the powerful role played by the revolutionary media in delivering the voice of truth to the world.”

The growing activity of sleeper cells inside areas under the control of insurgents in the north Syrian cities of Aleppo and Idlib during the month of June culminated on June 21, when Jabhat al-Nusra announced the assassination of its military commander Abu Abdullah Jabal by unknown assailants.

This incident raised alarm bells among the security agencies of militant factions inside Aleppo and Idlib, leading to Jaish al-Fatah’s (Army of Conquest) central force announcing in Idlib on June 22 that six people were arrested for planning to perpetrate bomb attacks and assassinations in the city and its countryside.

It is unknown with which party the people arrested are affiliated, as Jaish al-Fatah is preserving secrecy on the matter. This is while the regime and IS have not claimed responsibility for the assassinations, and no one will, in light of the presence of cells in the liberated areas.