Aleppo’s rebels struggle to hold on as regime, IS advance

Rebels in Aleppo say they are preparing a counterattack to recover the vital Sheikh Najjar Industrial City, which was captured by regime forces early this month. 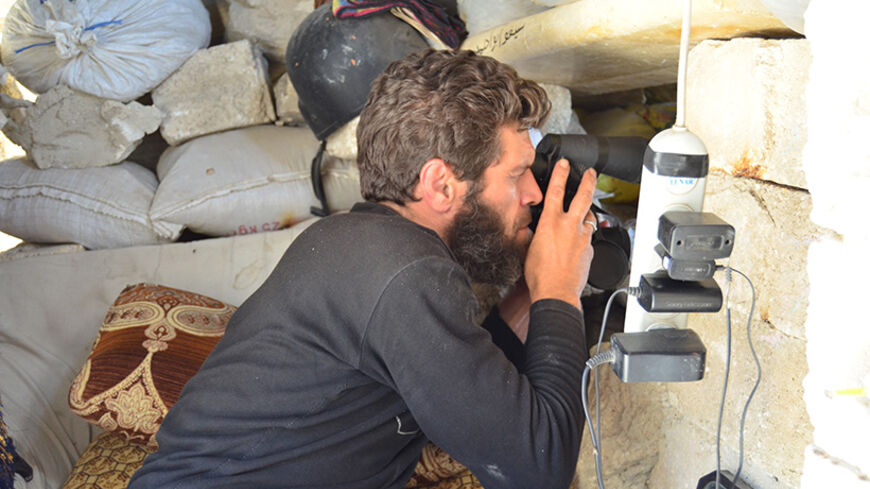 ALEPPO, Syria – Opposition fighters in the city of Aleppo are not hiding their concern about fast-moving events on the outskirts of their city and in the northeastern countryside. The progress being made by regime forces and the Islamic State (IS) has become worrisome and extremely dangerous.

A group of activists have gathered in the village of Tal Shaeer to provide support for opposition fighters. Tal Shaeer is the closest rebel foothold to the Sheikh Najjar Industrial City, which fell to regime forces and allied militias on July 5. The activists knew that they might soon be encircled, so they decided to send their best fighters to help prevent it in an operation dubbed the Sword of Aleppo for the People of the Levant. 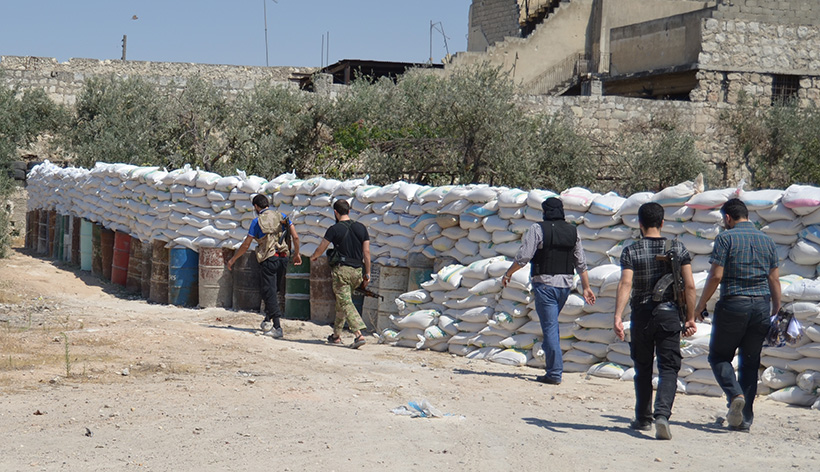 Opposition fighters fortify their position with the help of activists from the “Sword of Aleppo,” July 23, 2014. Photo by Mohammed al-Khatieb

Not far from the front line with regime forces in Sheikh Najjar, four Free Syrian Army fighters sat under a tree and enjoyed the cool breeze. They looked exhausted after long shifts on guard duty in the intense heat. Momtaz Abu Mohammad, a Sword of Aleppo activist, brought food and cold water to the fighters, who discussed the battlefront.

While pouring water on his colleagues’ heads, one of them confidently said, “The situation has become very good now. The attack was thwarted, and we have fortified our positions effectively. The war is about hit-and-run, while the leaders are preparing a plan. An attack to recover the industrial city is expected within weeks.”

A young man with a rural accent disagreed. He replied, “Brother, we don’t even know whom we should be repelling? IS is advancing in the countryside, and the regime [is advancing] in the city. … I fought on the Akhtrin front against IS, and they now ask us to repel the regime attack on Sheikh Najjar. How can we do all that?”

Abu Mohammad interrupted the young man and pointed to a helicopter in the sky. The aircraft seemed near, probably above the Hanano Housings neighborhood. The fighters watched, powerless, as the helicopter dropped two barrels and retreated toward the south.

When we got to the Handarat district on the way back to Aleppo, Abu Mohammad said that he feared the only main road connecting the city’s “liberated” area would be cut. He stated, “In military work, you have to expect anything. The regime is not too far from this road. We have to do what we can to support the fighters.”

The Sword of Aleppo initiative has fortified the front lines and the sensitive fronts in the city. The activists are providing daily support of food and water to the fighters, in addition to setting up mobile medical sites when battles are raging.

Abu Mohammad said, “Our first objective is to strengthen the coordination between the rebels’ military factions and let the [fighters focus on the fighting] while we provide all the logistical support they need.”

When asked about developments on the fronts and the rebels’ plan, he replied, “I am not saying that the situation is great, but it’s good. There doesn’t have to be progress. Now it’s more important to strike the regime at sensitive points and hold our positions.”

Losing Sheikh Najjar was a shock to opposition fighters. They had controlled it for more than two years. Its fortified factories had been a deterrent to regime forces as they crept toward east Aleppo. The opposition now fears that the industrial city will become a launching point for regime forces to advance toward the west and close the military cordon around Aleppo’s “liberated” neighborhoods while being helped by surrounding hills, which the regime controls. The opposition will have a hard time recovering the lost areas if the regime controls the hills.

Lt. Col. Abu Bakr, commander of Jaish al-Mujahedeen, one of the rebel factions in Aleppo, said that regime forces had been able to advance on the industrial city because the rebels stationed in the area had to withdraw to the northern Aleppo countryside to protect their hometowns, which were being attacked by IS.

Abu Bakr told Al-Monitor, “We have sent more reinforcements to the battlefronts in Aleppo, especially to the area of ​​Sheikh Najjar and al-Ramousah. The field situation is excellent defense-wise. But conducting an attack now requires quality weapons. Surprises are being prepared.” He refused to elaborate.

The commander added, “The lack of support and the absence of quality weapons were some of the main reasons why regime forces were able to advance. Weapons are pouring in to the regime from the eastern gates while the opposition, which is fighting IS and the regime concurrently, is being deprived of weapons.”

Rebel fighters in Aleppo are monitoring the Islamic State's victories in eastern Syria and in Iraq with great concern because they understand the implications. IS has gained control over all the areas that the rebels had once held in Deir ez-Zor. This means that IS is now free to move westward, in particular toward the north Aleppo countryside. Indeed, IS captured three villages in the Ain Arab countryside, north of Aleppo, on July 5. IS is now engaged in fierce battles against the rebels on the edge of Akhtrin.

Yahya Mayo, an official in the media office of Jaish al-Mujahedeen said, “There is no doubt that there is close coordination between the Islamic State and the regime. Several positions support that view. Most recently, the Islamic State withdrew from the area of ​​Shamer. This facilitated the regime’s entry to and subsequent control of the industrial city.”

It is still a widely held belief among rebels here that IS and the regime are still collaborating, despite a major IS assault last week on the regime-held al-Shaer gas field in Homs province, which the Syrian Observatory for Human Rights says resulted in roughly 270 deaths.

Mayo stated, “Oil and gas are a top priority for IS. They are willing to put all other interests aside in order to get their hands on the oil, which provides them with continuous funding.”

Mayo concluded, “I think that after this ordeal, all factions have become threatened by either the regime or the Islamic State. Thus, all factions have realized that the only solution possible is if they unite. And we, as Jaish al-Mujahedeen, consider ourselves part of an army that includes all the country’s components, and we are striving to achieve [this unity].”