Aleppo's rebels brace for IS assault

Syrian rebels have been going above and beyond to ready their cities in the countryside of Aleppo for a possible attack by the Islamic State. 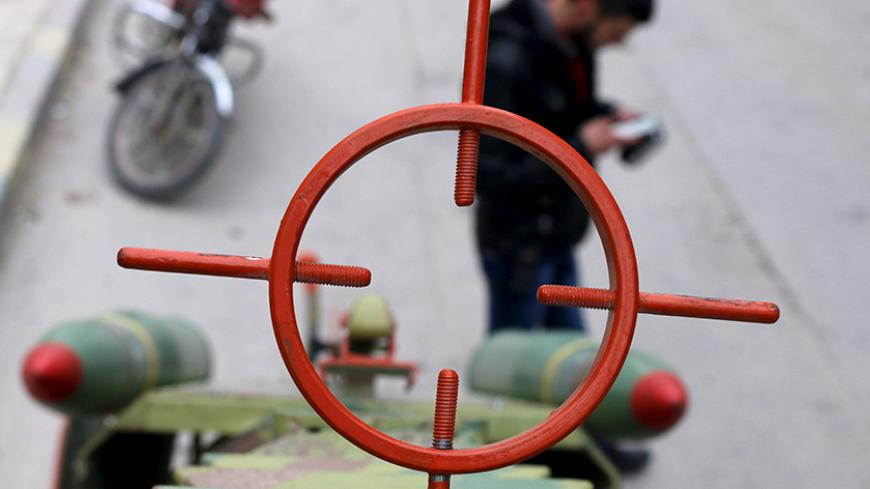 A rebel fighter of al-Jabha al-Shamiya (Shamiya Front) is seen through the scope of a new locally made cannon named "al-Qannas” (Sniper), in Aleppo, April 8, 2015. - REUTERS/Abdalrhman Ismail

ALEPPO, Syria — Syria's rebels are currently building up their troops in the northern countryside of Aleppo, as there have been talks about a possible imminent attack by the Islamic State (IS). On April 7, the group carried out two suicide attacks targeting two locations of the Sham Front — a unification of former forces including the Jaish al-Mujahedeen and the Islamic Front among others — in northern Aleppo.

The two bombings that took place simultaneously in the town of Marea and the village of Hawar Killis left 31 fighters dead among the rebels, including Yahya Hafez (aka Abu Maryam), a leader with the Sham Front.

Entering Marea was not easy. After the two explosions, the rebels' checkpoints on the town’s outskirts are thoroughly scrutinizing the IDs of the people coming in. People who are not residents of the town or who do not have an official reason to be there are not allowed to enter. This raises the question about the lax security measures in the rebel-controlled areas, and how it was possible for a truck loaded with tons of explosives to go past the checkpoints heading for the Sham Front leadership.

A day after the bombing in Marea, Hussein Abu Mahmoud, a journalist in the Sham Front, accompanied Al-Monitor to the bombing site, where a funeral for the fighters who were killed in the explosion was being held in front of the group’s heavily damaged headquarters. Mourners shouted slogans vowing revenge on IS as the dead were being buried in a nearby cemetery.

Today, the townspeople fear an imminent attack by IS on the rest of the northern countryside. In the town, word has it that IS has been mobilizing its troops in the nearby areas of Ehtemalat and Hawar al-Nahr, while Marea’s markets are suffering from economic stagnation, as they become almost entirely empty once the sun goes down.

“We received information about an IS military buildup, including tanks and vehicles equipped with machine guns in nearby towns on the demarcation line with us,” Abu Mahmoud told Al-Monitor.

“I do not rule out the possibility of an imminent attack by IS on the Aleppo northern countryside, as this is the signature attack strategy of the group: first sending booby traps, infiltrating and then attacking,” he added.

Along the demarcation line between the rebels and IS, starting from the Syrian-Turkish border at Hawar Killis down to Tal Shair (in the north of the industrial city of Sheikh Najjar), the Sham Front fighters are deployed in military points between agricultural lands and fields.

With the onset of spring, the weather has become suitable for night infiltrations and sudden attacks — again, signature IS attacks. Agricultural lands are no longer rugged as they were during the winter; this is not to mention the lush fields that now serve as camouflage for fighters during their infiltration.

In light of the situation, rebels have sent more reinforcements to the demarcation line with IS, according to Abu Mahmoud.

“We share a long front with IS that necessitates thousands of fighters to be covered. In the meantime, the Syrian regime is attacking us in the village of Handarat toward Malah in the northern countryside,” he said.

On March 19, the regime forces regained the support of Lebanese Hezbollah during a violent attack on the strategic village of Handarat in northern Aleppo. This was a big loss for the rebels, who had managed to control the village for only 10 days. The rebels’ power is being drained by the attacks of the regime and IS at the same time, which makes them sitting ducks for their enemy fire.

It is true that the northern Aleppo countryside is poor and lacks natural resources that might not be appealing for IS, unlike Deir ez-Zor and Raqqa — rich in oil wells and gas fields — but the group has other reasons for planning an attack on the villages there. IS sees that it could achieve a swift victory in the face of the dispersed and fractionalized ranks of rebels. This is not to mention that IS lost a lot in Kobani during the past months while facing the coalition between Kurdish People's Protection Units (YPG) and the Free Syrian Army, which was backed by air by the US-led international coalition against IS.

The Sham Front does not fall within the “moderate opposition,” according to US classification. The international coalition did not strike along the demarcation line between the Sham Front and IS. However, IS justifies its attacks on the front and other rebel factions by describing them as being part of “the awakening operations” and “American agents,” according to the group's videos. The reference to the awakening operations is a comparison with Iraq’s Awakening Councils established at the end of 2006 as a gathering of Sunni tribes. At the time, the councils received the support of the United States to counter al-Qaeda, known as the Islamic State of Iraq back then.

IS’ two suicide attacks on the headquarters of the Sham Front cannot be interpreted as a mere message to the front. They should be seen as a prelude to further escalation, which will result in inevitable confrontation between the two sides (IS and Syrian rebels). IS is taking advantage of the fact that the balance is currently tipped in its favor on this front, especially in the absence of the international coalition and the dispersal of rebels forces. This is not to mention that the regime is now preoccupied with the attacks on Aleppo’s northern countryside in its quest to impose a siege on the city of Aleppo.