Who will Turkey 'train and equip' in Syria? 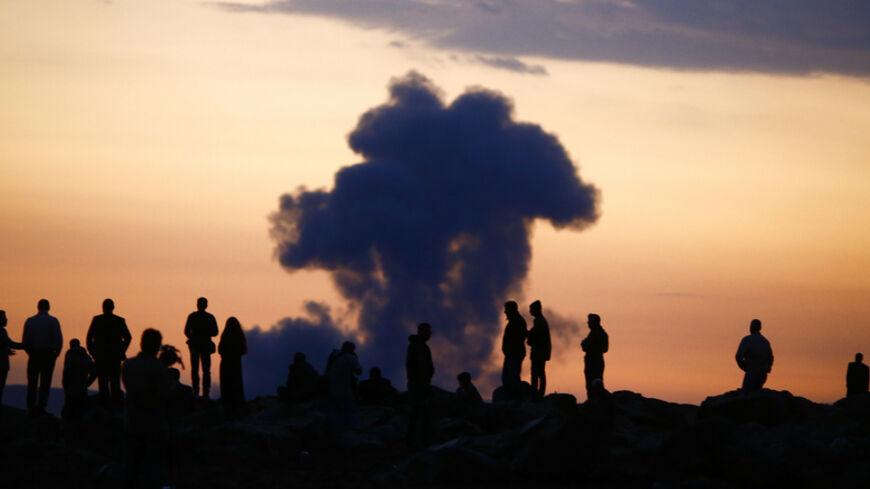 Turkish Kurds watch as smoke rises from the Syrian town of Kobani on the Turkish-Syrian border in the southeastern town of Suruc in Sanliurfa province, Oct. 18, 2014. - REUTERS/Kai Pfaffenbach

Turkey holds out on US appeals to fight IS

US officials now devote a fair bit of energy to keeping up appearances that Turkey is a partner in the US coalition against the Islamic State (IS).

The visit to Turkey last week of retired Marine Gen. John Allen, the US special presidential envoy for the global coalition to counter IS, and Brett McGurk, deputy assistant secretary of state, as reported here, is a case in point. Turkey made no concession to allow reinforcement of Syrian Kurdish rebels battling IS forces in Kobani. US officials had to backtrack, with some awkwardness, on whether Turkey had agreed to the use of the Incirlik air base by the United States for attacks against IS forces; Ankara had not granted permission, at least not yet.

The United States therefore made much ado about Turkey’s willingness to “train and equip” Syrian rebel forces, although this too may be less than meets the eye, if the US purpose was to obtain a Turkish assist in the battle against IS.

Fehim Tastekin reports: “Details have also leaked on Ankara’s plans regarding the 'train-and-equip' effort, with which Ankara is more open to cooperation. Accordingly, the first 2,000-strong group of trainees will be mostly Turkmens from the Damascus and Aleppo areas. The National Intelligence Organization (MIT) will select trainees based on certain criteria, including that the candidates are 'reliable' and see Syrian leader Bashar al-Assad as an 'essential target.' The location of the training, to be provided by Turkish and US experts, is not yet clear, but the central Anatolian city of Kirsehir is said to be a favored option.”

As a sign of its increasing isolation in the region and with the West, Turkey this week lost its perhaps ill-timed bid for a two-year term as a nonpermanent member of the UN Security Council, as Semih Idiz reports.

In related news, Tulin Daloglu reports this week on extensive oil smuggling in the Turkish border town of Reyhanli, where millions were made as a result of lax oversight by Turkish authorities, whose priority was a border that would accommodate the flow of anti-Assad rebels into Syria.

Turkey’s priorities are not to defeat IS, which Ankara considers a useful, if risky, means of leverage against the Kurdistan Workers Party and its Syrian counterpart, the Democratic Union Party, as well as the governments of Syria, and — to a lesser extent now that Nouri al-Maliki is no longer prime minister — the government of Iraq.

Ankara is also seeking to broker its role in the US coalition in exchange for the United States backing a safe zone for opposition forces fighting the Syrian government, which the Barack Obama administration is resisting.

The challenge for Turkey will be whether it is placing its relationship with Washington and other NATO countries at risk in pursuit of its other priorities.

Syria Pulse correspondents Mohammed al-Khatieb, Edward Dark and Khaled Atallah report on intense fighting among government, opposition and jihadist forces in Aleppo and Daraa regions while international attention is focused mostly on the battle for Kobani.

Khatieb writes: “The Islamic Front opened a front in the southern countryside of Aleppo, trying to tighten the noose on defense factories where explosive barrels are produced. The area is also a central launch site for helicopters taking off to bombard neighborhoods and towns under rebel control. Although the rebels' remaining supply line connecting the countryside to the city of Aleppo remains unobstructed for the moment, it is still at risk. In light of the rebels' concurrent battles with IS and government forces, they appear to be in a position to lose strategic regions or to be forced to withdraw from them, with their forces spread thin along a lengthy frontline between the two parties.”

Dark, also writing from Aleppo, observes: “Indirectly, the ‘moderate’ rebels, or to whomever that distinction actually implies on the ground, are being steadily suffocated and deprived of the necessary oxygen to keep their war against the regime alive.”

In the Aleppo countryside, Dark reports: “Ahrar al-Sham, a Salafist group, launched its own campaign, dubbed Za’eer al-Ahrar (Roar of the Free), to take the strategically vital defense factories, which not only produce ammunition for the Syrian regime, but the notorious barrel bombs as well. The helicopters that drop them take off from there. The defense factories overlook the strategic town of Sfireh, and taking them would cut off the only supply route to regime forces in Aleppo as well as to the civilian population in the west of the city. Ahrar al-Sham managed to take some nearby villages, but its campaign proved to be abortive, its fighters' gains were quickly reversed.”

Dark writes that Syrian government forces advanced on the vital Handarat area of Aleppo, “threatening the Handarat refugee camp, the real prize there. Handarat had been a loyalist Palestinian refugee camp until it was overrun by rebel forces as they pushed to consolidate their grip on Aleppo city in late 2012. In fact, many members of the pro-regime Al-Quds Brigades hail from Handarat and have been active in the fighting that has raged east of Aleppo city around the airport, as well as this latest push to retake the camp. Should the regime manage to capture the camp, it would cut off the last supply route linking rebel-held east Aleppo city with the rebel-dominated countryside, effectively choking off both groups of rebels and the civilians still living there, thought to number around 200,000. This would be a devastating blow to the rebel movement in Aleppo, likely marking the beginning of the end for them.”

Dark describes the complexity of those countries seeking to support "moderate" opposition forces in Handarat and elsewhere: “Crucially — and this is one of the major conundrums of the Syrian conflict — a Chechen-dominated jihadist group, Jaish al-Muhajreen (Army of Emigrants), fighting on the Handarat front, has been receiving assistance from the US-backed and -armed Hazem Movement, which has used TOW missiles to take out regime armor.”

Khaled Atallah reports from Daraa that the Syrian government may be on the defense south of Damascus: “Syrian rebels launched a series of battles in southern Syria to open the route between Daraa and Quneitra and gain access to Damascus and its besieged western countryside. The clashes took place at the end of September and beginning of October, and included the Sept. 27 al-Waad-al-Haq battle that resulted in rebels seizing Quneitra, and the Oct. 4 Daraa offensive that fighters announced on the first day of the Eid al-Adha festival in the northwest Daraa countryside. The rebels took control of al-Harra and its strategic Tel al-Harra hill.”

Atallah describes the perilous journey from Damascus to Daraa: “Upon leaving Damascus, one feels as if one has gone from one country to another. Most of the villages and towns on both sides of the southbound international highway have witnessed fierce battles, whose effects are still obvious. The passengers on the road, which is controlled by the Syrian army, are at risk of becoming targets for regime snipers as they enter opposition-controlled areas in the countryside of Daraa. To reach the western countryside of Daraa, several checkpoints have to be crossed, including those of the National Defense Forces, the Syrian army, rebel fighters and Jabhat al-Nusra. The sounds of shelling and explosions increase as you get closer.”

Is Makhlouf dismissal a signal from Assad?

Assad has dismissed Hafez Makhlouf, his cousin, from the top security position in Syria, which could be a signal to Syrians and other governments, according to Jean Aziz.

Makhlouf, who passed through Beirut last week en route to Belarus, “succeeded in developing this branch and equipping it with the latest security and intelligence technology. Such a security success in a country like Syria creates sensitivities for other branches within the regime and for those concerned with the capabilities of the security apparatus.”

“This explains why he stepped down,” Aziz writes, “since this step can also be seen as a sign of goodwill from the regime. Internally, the regime is trying to absorb the dissatisfaction and wrath that the Syrian people harbor toward its officials. The regime is also conveying a message to other governments: It is ready to sacrifice and dismiss those who were blacklisted to demonstrate its commitment to initiating a reform process. This was the second step taken in this regard. Another prominent Alawite, Col. Sakr Rustom, chief of the Popular Defense Committees in Homs, was also relieved of his duties.”

by Murielle KASPRZAK and Joseph SCHMID | AFP | May 26, 2022
END_OF_DOCUMENT_TOKEN_TO_BE_REPLACED