Rights and aid organizations in the Syrian province of Idlib are warning of the humanitarian disaster that could follow an imminent regime offensive on the last rebel-held territory. 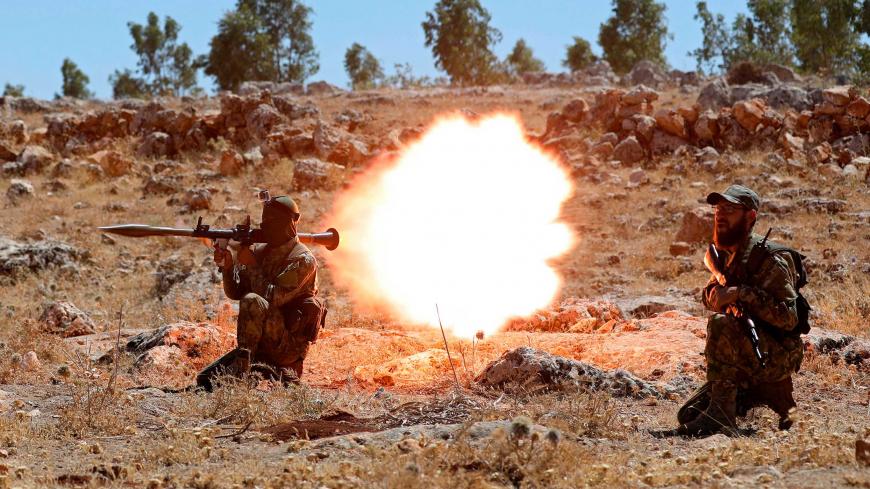 A Syrian fighter fires a rocket-propelled grenade as he attends a mock battle in anticipation of an attack by the regime on Idlib province and the surrounding countryside, Idlib province, Syria, Aug. 14, 2018. - OMAR HAJ KADOUR/AFP/Getty Images

IDLIB, Syria — Cautious calm prevails over Idlib province following the bloody escalation on Aug. 10 that left 53 dead and dozens injured in several towns. When Al-Monitor visited the scene on Aug. 14, civil defense crews were still working in cooperation with locals to remove the rubble and open the roads.

Ahmed Barakat gathered what remained of his destroyed home in the town of Urum al-Kubra, west of Idlib city. All of the residential neighborhood's houses turned into piles of rubble when Russian airstrikes targeted the town on Aug. 10.

A layer of dust covered Barakat’s hair and face, his eyes sad and tired. As he was leaving in a car with what is left of his belongings, he told Al-Monitor, “In one moment, your life can turn into hell. Just before sundown, an aircraft flew over and attacked our neighborhood. I thought I was dreaming, but it was a living nightmare. Dozens of my neighbors were killed or injured. The entire Al-Abboud family was killed.”

He added, “Although my house was not completely destroyed, I cannot live here anymore. I will move in with my relatives until I find a place of my own.”

Thirty-six people, half of them children, were killed in Urum al-Kubra. Shock was still evident on people’s faces as they walked past the site of the massacre, as locals call it.

Russia, Turkey and Iran have been overseeing the de-escalation agreement in Idlib since Sept. 15, 2017. The violence has dropped but bombings and raids have yet to completely stop.

Foreign Minister Sergei Lavrov arrived in Ankara on Aug. 14 to discuss Idlib and other topics. Speaking at a joint news conference with his Turkish counterpart, Lavrov expressed hope that the Idlib issue would be solved through cooperation to defeat all terror groups, including Jabhat al-Nusra.

Turkish Foreign Minister Mevlut Cavusoglu said during the press conference, “It would be a massacre to bomb Idlib's civilians, hospitals, schools just because there are terrorists.”

The Urum al-Kubra massacre came as heavy fighting with warplanes and artillery fire escalated, reaching a climax on Aug. 10. A series of raids targeted several towns and cities in Idlib province, killing nine people in the southern town of Khan Sheikhun and causing dozens of casualties and injuries in several other towns.

Opposition factions control the province of Idlib along with small areas in the countryside of Aleppo, Hama and neighboring Latakia. Syrian President Bashar al-Assad announced that retaking the area was his army’s next priority after having retaken Daraa and Quneitra in the south of the country.

​The director of Syria Civil Defense (known as the White Helmets), Raed al-Saleh, warned that an attack on the province could create “the largest disaster of its kind in Syria.”

He told Al-Monitor in an online interview, “We are ready to do our job and save lives. Over the past years, we have responded to many crises in Syria, but Idlib’s population density is the largest we are yet to encounter.” Idlib is home to 3.6 million residents.

The Syria Civil Defense evacuates victims and rushes them to hospitals following each bombing. In Idlib, the White Helmets have about 80 rescue and fire-fighting centers, according to Saleh.

Other humanitarian organizations, such as Ihsan Relief and Development, Violet Syria, Maram Relief and Development, Syria Charity and many others, are working to establish camps and provide food in preparation for a mass displacement. Each month, the Coordinators for Humanitarian Response in northern Syria meet with organizations to exchange statistics and draw up plans.

Director of Coordinators for Humanitarian Response in northern Syria Mohammad Shami told Al-Monitor, “Organizations operating in Idlib cannot contain the humanitarian crisis that could be caused by a possible large-scale attack. There is no way that these organizations can handle this. The situation would require international effort and support.”

Shami pointed out that displacement has already begun in areas close to the line of contact between the opposition and the regime south of Idlib, explaining that 3,000 families were displaced on Aug. 14 by clashes in the area.

Fouad Sayed Issa, a member of Violet Syria’s leadership, told Al-Monitor, “We started considering a range of possible scenarios in cooperation with many humanitarian organizations. However, nothing is concrete yet. We are only discussing what may take place in Idlib.”

Issa added, “We did not erect camps in anticipation of an attack. We do not have the capacity to do so. We cannot afford a new humanitarian disaster, because we and other organizations have not yet been able to absorb the previous disasters that resulted from the displacement of residents from Ghouta, Homs, Daraa and other areas.”

Idlib province is now home to many of the displaced who rejected a settlement with the regime in other areas of the country. They now have nowhere else to go.

Capt. Naji Abu Hudeifa, a spokesman for the National Liberation Front (NLF), the largest coalition of opposition factions in Idlib, told Al-Monitor, “We do not trust the regime, we do not trust the Russians and we are preparing for a probable attack. We have stepped up defense lines on all fronts and our defensive and offensive plans are all set.” He added, “We may agree with the regime politically if our goals are achieved.”