What are the real goals behind local truces in Syria?

Opposition activists say the truces reached in several Syrian regions are a regime tool to rearrange the country's demographics. 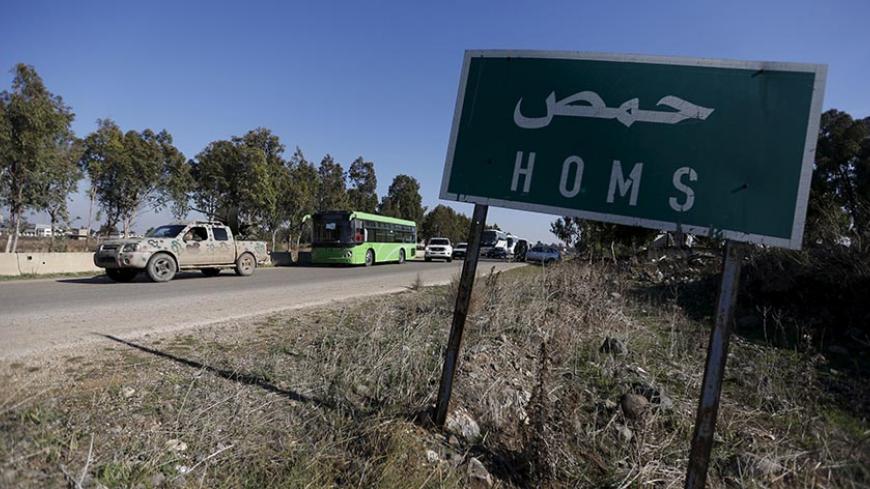 Buses leave the district of al-Waer during a truce between the government and rebels, in Homs, Syria, Dec. 9, 2015. - REUTERS/Omar Sanadiki
Mustafa al-Haj
January 13, 2016

DAMASCUS, Syria — Several successful cease-fire truces have been reached in different parts of Syria between the Ministry of National Reconciliation on the one hand and UN delegations and native dignitaries on the other. The regime calls these truces “national reconciliations,” but many observers wonder if perhaps the agreements just stem from the regime’s desire to herd opposition brigades into Idlib in northwestern Syria.

Under one of the latest truces, in Homs, the opposition battalions’ militants took their light weapons on Dec. 8 and left al-Waer neighborhood for the countryside of Idlib in the north after a five-month siege on the city.

Also, a deal led opposition fighters in long-besieged Zabadani to leave with their families on Dec. 28 toward Lebanon, Turkey and the Idlib countryside. The truce aimed to implement the September agreement reached in Turkey between an Iranian delegation and one from the opposition umbrella group Jaish al-Fatah (Army of Conquest).

On Dec. 1, a delegation of notables representing Jabhat al-Nusra in al-Waer neighborhood met with regime representatives — including the head of the General Intelligence Directorate, Mohammed Dib Zaitoun, and the governor of Homs, Talal al-Barazi — under UN auspices through UN Ambassador in Syria Yacoub El Hillo.

The main directive of the resulting truce, which was implemented Dec. 9, provided for a complete cease-fire between the two parties and the exit of 270 fighters from Jabhat al-Nusra — which opposed the truce — to the countryside of Idlib in the north. The truce called for medium weapons to be handed over to the Syrian regime, humanitarian corridors to be opened into the neighborhood, the conditions of the remaining wanted people to be settled and a list of detainees held by the regime to be prepared for them to be released.

The regime says these truces serves the political solution process, but some activists and media outlets think the regime is seeking to empty these areas to prove its military strength and ability to manage the crisis. They say that the regime wants to kick-start the process of demographic change in the region and that it will not allow the displaced to return to their homes once the situation calms down.

In this context, France 24 website reported Dec. 18 that al-Waer residents refused to leave the neighborhood, as the truce had suggested, despite the miserable conditions there. The residents might fear that the Old Homs scenario will be repeated once they are out, and that the regime will never allow them to return. In April, the regime did not allow Old Homs residents to return following the deal between Jabhat al-Nusra and the regime there, even though the deal stated that the civilian citizens would be able to return.

Al-Monitor asked Anas Judeh, head of the opposition's Nation Building Movement, about the extent to which these truces might manage to end the armed conflict and solve the Syrian conflict.

“From the Russian standpoint, the agreements currently reached with armed groups in regime-controlled areas are the result of the Vienna II agreement signed in October 2015 calling for clearing the ‘useful’ Syrian areas of undisciplined armed groups that are incompatible with international agreements," Judeh said. "This paves the way for a stable environment, which can set the stage for a political process that Russia can apply and invoke with the United States, thus extending the international conflict” over how to handle Syria.

According to Judeh, Moscow believes that to solve the Syrian crisis, terrorism must be countered first and Syria must be rescued from extremist groups like Jabhat al-Nusra and the Islamic State (IS) through Russia’s military presence. Only then can a transitional phase that includes Bashar al-Assad be discussed.

“We should be careful not to end up with a serious social fracture or animosities among the Syrian people," Judeh added. "Putting an end to the military conflict and transferring thousands of armed men along with their families to ‘remote’ regions is not enough. After all, these, along with their children, will only be ticking time bombs. Social, cultural and political work is essential to reintegrate them within the Syrian community. War on the extremist and terrorist ideology is not limited to military means alone, as it also includes cultural, social and political aspects.”

Instead of ending the conflict, Judeh said, sending fighters to other areas only serves to entrench the problem and might ultimately divide Syria into separate areas controlled by the regime, IS, Jabhat al-Nusra and the Kurds.

Some critics say the regime's efforts are an attempt to prove it can reach compromises that could end the Syrian war. The regime, they say, is trying to prove it should be a key player in the next phase, which would enhance its power centers in regime-controlled areas. This would subsequently lead to the deterioration of truces given that they were not reached under appropriate conditions, and especially given the absence of neutral observers.

Al-Monitor met with Reem Turkmani, head of the Madani Organization and a member of the board of the Syrian Civil Coalition. Turkmani said, “To begin with, what the regime is doing cannot be described as reconciliations. These are agreements whose main parties are military bodies seeking to achieve their interests through negotiations, not fighting.”

He added, “We may witness more local agreements, but there is no guarantee of continuity given the absence of observers, human rights organizations to follow up on the prisoners’ situation or independent mediators. And there is no political will to reach a solution.”

Turkmani told Al-Monitor that the best solution is for Syrians — be they civilians or militants — to stay in their areas. But some of them are forced to leave for two reasons. First, there is no third party, such as international observers, capable of protecting those who are most vulnerable to the risk of arrest. Therefore, some people prefer to leave out of fear of being arrested or forced into conscription, which could lead to their death.

Second, not all truces go as smoothly as those in Zabadani and al-Waer. For example, on Dec. 25, there were signs of an unprecedented deal that would have allowed IS militants to exit the southern Damascus districts of al-Qadam and al-Hajar toward Raqqa, the organization’s stronghold. Under the deal, buses would have transported the militants through areas under the control of Jaish al-Islam and then head to Raqqa. However, the deal failed, according to the Syrian Observatory for Human Rights, after Jaish al-Islam Cmdr. Zahran Alloush was killed Dec. 24.

But a civilian activist from al-Qadam said Jaish al-Islam wasn't involved at all with the failed truce.

"IS is the reason behind the deal's failure. They did not want to get out at once without knowing who would be governing the areas that they were leaving," the activist, who oversees the Facebook page of the Local Council of al-Qadam in Damascus, told Al-Monitor on condition of anonymity. “Jaish al-Islam has nothing to do with this. The buses arrived the morning of Dec. 25 and waited in vain as IS members refused to leave.”