Will Syrian regime's advances on the ground strengthen their position in Geneva?

In line with its policy of closing borders and cutting off supply routes, the Syrian regime has launched an offensive on the town of Hirbnafsah on the border between Homs and Hama a few days before Geneva III. 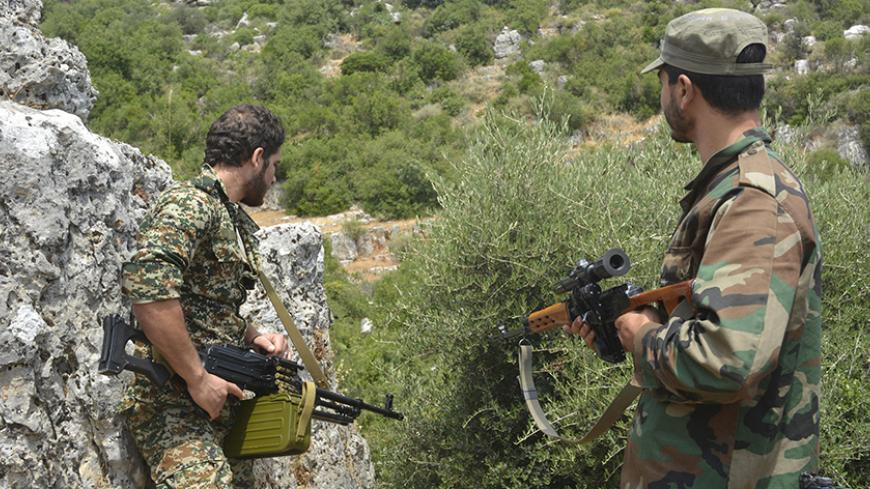 DAMASCUS, Syria — The Syrian regime forces achieved significant progress on the front opened in October on Latakia's countryside by controlling the town of Salma in the north of the province Jan. 12. On this same date, another military offensive opened on the southern countryside of Hama, specifically on the Homs-Hama border.

The offensive began when the regime forces took control of the village of Jarjisa north of al-Rastan lake — which separates the provinces of Homs and Hama — and advanced eastward toward the village of Hirbnafsah — controlled by Jabhat al-Nusra and other Islamic factions. Intense artillery shelling by the regime forces was met with violent clashes with Jabhat al-Nusra militants and other factions.

The Syrian Arab News Agency did not cover the regime offensive on Hirbnafsah very extensively, only reporting Jan. 19 on the Syrian air force's destruction of vehicles of Jabhat al-Nusra fighters in the town. The National Defense Forces announced via YouTube that the regime forces were able to control the al-Madajen area north of Hirbnafsah on Jan. 20, a victory corroborated by the Syrian Observatory for Human Rights.

The pro-government daily Al-Watan reported Jan. 25 that the regime forces brought in reinforcements to Hirbnafsah “to increase its effective presence in the region amid militants' attempt to achieve any victory on the Syrian army, even moral.”

Abu al-Qasim al-Hamwi, a media activist present with the militants of Jabhat al-Nusra and other Islamic factions in Hirbnafsah, told Al-Monitor via Skype that the regime forces' reinforcements have indeed arrived to Hirbnafsah. However, he said, “The regime forces have been trying since the start of the military offensive to advance toward the town, but they have been failing every time to defeat Jabhat al-Nusra resistance fighters reinforced inside the town of Hirbnafsah.”

Hamwi added, “Since Jan. 12, the regime has not stopped shelling Hirbnafsah with artillery and warplanes, whether Russian or Syrian, in an attempt to weaken the fighters in it, who in return targeted the regime checkpoints and forces with dozens of missiles.”

Hamwi pointed out that on Jan. 19 the opposition forces advanced and controlled the al-Bashakir factory checkpoint on the outskirts of Hirbnafsah. “This led to the killing of a first lieutenant and the destruction of a tank and its full crew, along with two mortars used by regime forces,” he said.

Hirbnafsah is one of the largest towns in the southern Hama countryside, located on the administrative border between the provinces of Homs and Hama to the north of al-Rastan Dam on the Orontes River.

Defected Syrian officer Khaled al-Barazi said the town is in a strategic location, serving as the Hama countryside's gate to the northern and northwestern Homs countryside.

He told Al-Monitor via Skype from the Lebanese city of Tripoli, where he has been living for the past year, “The regime forces recently adopted a policy of closing crossings aiming to separate the rural areas controlled by the opposition fighters. They recently succeeded in partly closing the northern Tier Malah crossing in Homs with the start of the fighting there. They also closed the road leading to the village of Jinan in southern Hama countryside and were able to control this village.”

Barazi stressed that the offensive waged by the regime forces on Hirbnafsah falls within the scope of the policy of closing the crossings to separate the Homs countryside from the Hama countryside. He said, “The Syrian regime’s control of Hirbnafsah will cut the road in front of opposition fighters between Salamiyeh southeast of Hama and Hama city. It will also cut off supply and communication routes between the armed factions in Hama’s southern countryside and Homs’s northeast countryside.”

Barazi pointed out that the regime forces’ progress toward the strategic town of Hirbnafsah aims to open the way to the opposition-controlled Houla Valley area in the eastern countryside of Homs, near the Lebanese-Syrian border.

Radio al-Kul, affiliated with the National Coalition for Syrian Revolution and Opposition Forces, reported Jan. 21 that because of the continued military offensive in the region, thousands of residents in the villages of Hirbnafsah, Talaf and Deir al-Fardis have fled to the Houla Valley area in the countryside of Homs. It also reported that an estimated population of 70,000 people are living in this area under difficult conditions and many are in urgent need of baby formula four years into a siege imposed by the regime forces.

Jamal Hazouri (a pseudonym), a leader in the pro-regime Baath Brigades, told Al-Monitor via Skype, “The offensive started with the control the village of Jarjisa east of the town of Hirbnafsah, and the village of Deir al-Fardis to its north on Jan. 15. Then, the forces advanced toward Hirbnafsah under the Syrian regime's air and artillery cover. The battles are still ongoing against al-Nusra militants in the vicinity of Hirbnafsah. Our forces started the offensive in the west by targeting the village of Talaf with aerial and artillery shelling.”

Hazouri added, “We launched this offensive to take back the southern Hama countryside, to oust al-Nusra and tighten the noose on militants in the northern and northeastern countryside of Homs, which will be our next target.”

Hazouri pointed out that controlling Hirbnafsah and the surrounding villages will allow the regime forces to reopen the Damascus-Aleppo road by controlling its surrounding areas, including the city of al-Rastan under the control of the opposition since 2012.

Political analyst Ahmed Suleiman told Al-Monitor from Damascus, “The Syrian regime is trying in its recent military operations to gain new cards before sitting at the negotiation table planned for Jan. 29 in Geneva.”

Suleiman added, “The regime wants to gradually reduce the regions controlled by the opposition in an attempt to prove its strength at the negotiating table and force the opposition into submission, in case the latter invoked any conditions or solutions that are not accepted by the regime. This [offensive] allows the regime to appear victorious in the media.

"This was clearly manifested during the visit by the assistant regional secretary of al-Baath Arab Socialist Party Hilal al-Hilal to the conflict regions in the southern countryside of Hama.”

The Syrian regime's offensive on the Latakia countryside, the Hama countryside and the Homs countryside — which seems to be the regime’s new destination, according to the military situation on the ground and the continued Russian support — and its previous offensive on the countryside of Daraa plus truces in Homs and Rif Dimashq seem to be an attempt by the regime to control vital areas in Syria and secure major cities in the country, from Daraa to Hama and all the way to the coast, in order to have the strongest voice at the negotiating table.