Conflicting reports about the opening of the Homs-Hama road have been issued as both the Syrian regime and opposition look to leverage the strategic route. 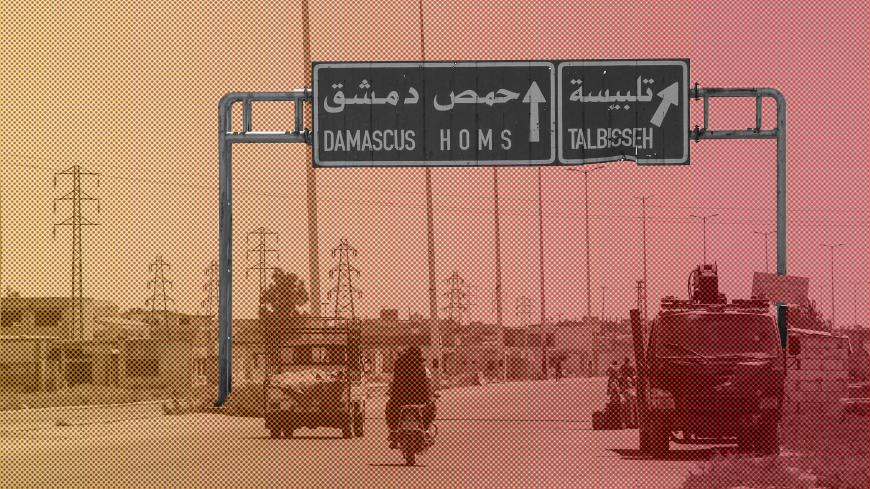 Vehicles drive past a road sign showing the way to Homs on the road between the city and Hama in Talbisa, Syria, Aug. 3, 2017. - MAHMOUD TAHA/AFP/Getty Images
Khaled Atallah
September 20, 2017

DAMASCUS, Syria — The Homs-Hama road has been closed ever since military operations started between the regime and the opposition in mid-2011, when it was replaced by the bumpy Hama-Salamiyah road in the east.

On Sept. 10, in a bid to reopen the closed international road, negotiations were held held between the Syrian opposition and the regime, under Russian sponsorship, without any results being reached.

A source close to the opposition delegation at the negotiations told Al-Monitor on condition of anonymity, “The regime is hampering the opening of the road by rejecting one of our main conditions, which is the release of detainees. It seems the regime wants the opposition to hand over its weapons and abandon its lands first, just like what happened in other Syrian regions. We will not accept this. Our main objective is not to open humanitarian corridors. This has been already imposed by the opposition on the regime, in exchange for the opposition forces keeping the strategic Musiaf-Tartous road to the regime and its militias.”

The Russian version of the story is different. On Sept. 11, the Russia Today news website published a video allegedly showing the arrival of Russian humanitarian aid to the city of Rastan after what was termed the recent reopening of the Homs-Hama road.

Samer Tlass, a resident of Rastan, denied this. “The road has not been opened, no aid has entered the city and the Russian aid referred to was distributed in the towns of Sirin and Tumin controlled by the regime, in the southern Hama countryside,” he told Al-Monitor.

While the opposition asserts that no agreement to open the road was reached, Gen. Sergei Rudskoi, the head of the General Staff's Main Operational Directorate, said Sept. 6 in a press briefing at the Russian Defense Ministry in Moscow that a de-escalation agreement was reached with the Syrian opposition in the northern Homs countryside to unblock the Homs-Hama motorway.

This Russian announcement is not the first of its kind. On Aug. 3, a spokesman for the Russian Defense Ministry announced in a statement that an agreement had been reached between the Syrian regime and opposition following negotiations in Cairo. The agreement included establishing a de-escalation zone in the northern Homs countryside and unblocking the Homs-Hama road.

Rakan al-Homsi, a media figure close to the Shura Council in Rastan, told Al-Monitor, “This agreement was breached five days later after clashes between opposition forces based in the town of Talbisa and forces loyal to the Syrian regime, such as Hezbollah and the National Defense Forces. Both the Syrian opposition and the regime rejected the agreement and considered it null.”

Abu Abida al-Hamawi, an opposition military commander in Rastan, told Al-Monitor, “After the breach of the Aug. 3 agreement, a meeting was held in the northern Homs countryside Aug. 8 between representatives of the armed opposition and local figures on the one hand, and representatives of the Russian forces on the other hand, to reach a de-escalation agreement in the northern Homs countryside. This agreement is similar to the Cairo agreement but includes the condition of the release of all detainees from Homs province in the prisons of the Syrian regime as a priority condition."

Hamawi added, “The opposition factions failed to agree on whether to implement the Aug. 3 or Aug. 8 agreement. The factions that had rejected the Cairo [Aug. 3] agreement justified their decision by saying this agreement was reached outside Syria and did not give priority to releasing the detainees.”

He said a joint committee was subsequently established Aug. 9 between the factions and entrusted to negotiate with the Russian side.

Explaining why the Homs-Hama road is still blocked, retired officer Hafez Jadid, from Damascus, told Al-Monitor, “The opposition forces do not want to open the international road without obtaining as many gains as possible. The opposition knows that it will be losing its trump card by opening the Rastan bridge and enabling the regime to control the strategic Rastan bridge and dam.”

He added, “When opened, this road will be the lifeline of the Syrian regime and its allies, allowing them to support their forces in northern Syria, away from the Salamiyah side road adjacent to the areas controlled by the Islamic State (IS).”

He said this would make the road from Damascus all the way to Idlib fully controlled by the regime.

When asked about the Russian statements confirming the opening of the international road although the negotiations are not over, Jadid said, “The Russians are sending an indirect message to the opposition forces that a decision was taken to open this road by any means. The Russians want to pressure the opposition to agree; otherwise, they will open this road by any means. Russia wants to ensure calm in all areas controlled by what is known as moderate opposition before it begins to cleanse Syria of IS and Hayat Tahrir al-Sham.” Hayat Tahrir al-Sham is a successor group to Jabhat al-Nusra.

“In this case, the Homs northern countryside towns will have two options, either to join the Russian de-escalation zones, which will guarantee civilians a better life, or expect to be hit by the Russian shelling,” he told Al-Monitor.

The Homs-Hama international road remains blocked, despite all efforts, but Obeida Bitar, 21, a student from Hama, hopes the Russian efforts to open it will be successful, since it is taking him two hours daily to get to his university in Homs from his home in Hama through the alternative route, while the main road between Hama and Homs (a distance of 45 kilometers, or 25 miles) would only take 35 minutes.

He told Al-Monitor, “The revolution is no longer what it was. The opposition factions in Rastan and Talbisa have to make some concessions. People just want to live.”