Alawites prepare as IS, Jabhat al-Nusra close in on regime areas

Supporters of Syrian President Bashar al-Assad long dismissed the threat from the Islamic State, but that threat has become real as jihadists move into the Homs countryside, approaching Alawite and Christian areas. 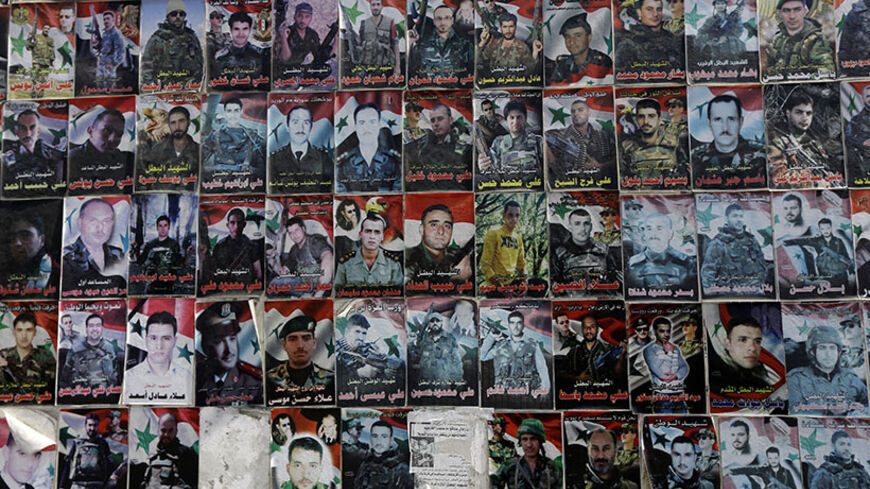 A memorial bearing the portraits of soldiers from Tartous, who died during the Syrian conflict, is seen on a wall in the city northwest of Damascus, May 18, 2014. - JOSEPH EID/AFP/Getty Images

TARTOUS, Syria — Supporters of the Syrian regime seemed to be more reassured last year, as regime forces had been advancing, retaking the lead in many regions, especially along the coast. The emergence of the Islamic State (IS) and the progress it made at the expense of the opposition, declaring the establishment of an Islamic caliphate in June, did not cause much fear in the ranks of the regime’s supporters.

However, concerns increased as IS started waging battles against government forces in Raqqa province and in the eastern countryside of Homs, while different brigades, including Jabhat al-Nusra, have been advancing in the Hama countryside, closing in on Al-Ghab plain, which is seen as the eastern gate to the Alawite areas in the mountains of the Syrian coast.

In the Alawite-majority coastal city of Tartous, people are still leading normal lives, as they are not greatly affected by the turn of events. However, many of the region’s young men continue to perish in battles. Nevertheless, security measures have recently been noticeably tightened, with security patrols deployed on main crossroads at night, in addition to checkpoints where cars are stopped to verify the identities of drivers and to make sure they own the vehicles they are driving.

A citizen in the area said: “The authorities have concerns about car bombs and the infiltration of IS fighters into the city,” while others downplayed the role of these patrols and mobile checkpoints, with one person saying, “They have been deployed to detect car-theft gangs, which have recently increased.”

Still, the regime’s supporters have changed their stance on IS after it gained control of the 17th Division headquarters in Raqqa, killing dozens of soldiers, mostly hailing from the Syrian coast.

An Alawite pro-opposition citizen from Tartous, who spoke on condition of anonymity, told Al-Monitor: “Many of the supporters of the regime here have been whispering that the organization is infiltrated by the Syrian intelligence, to break the ranks of the brigades fighting against the regime. Many of them did not give IS much attention, considering it to be one of the factions fighting against the Syrian authorities. They were content with the fact that IS has been keeping the opposition battalions busy with side battles. Today, however, things have changed. IS appears to be an organized, strong and brutal faction, advancing at the expense of other groups, including the regime’s forces, after a long period of mutual nonaggression.”

The concerns over IS can be clearly detected by simply asking a taxi driver in the city about the situation.

“We were reassured that IS will not get near our areas, but it is closing in on the Alawite town of Furqlus in the eastern countryside of Homs," the taxi driver in Tartous told Al-Monitor. "Other fighters have been advancing in areas surrounding Hama, and the claims by some people that IS is secretly collaborating with the regime’s forces appear to be an illusion. Hundreds of Alawite soldiers have been killed in Raqqa’s countryside and at the Al-Shaer gas field in eastern Homs.”

A resident of one of these towns, who spoke on condition of anonymity, told Al-Monitor: “Many young men from the Houla Plain may join the ranks of IS, which will make the organization more powerful, organized and maybe more heavily armed if it manages to expand toward the northern countryside of Homs.”

“The tacit agreement between IS and the regime collapsed. People in Houla hold a grudge against us, as they accused the National Defense Forces [NDF] in our region of being responsible for the Houla massacre in May 2012,” he said.

As IS and Jabhat al-Nusra move closer to Alawite areas, Alawite residents prepare for what many here see as an existential fight.

“I refused to join their ranks [NDF], and I believe that they may actually be responsible for the massacre in Houla. But Sunni militants are advancing in the neighboring countryside of Hama, while IS is fighting fierce battles against the regime’s forces to the east of Homs. Should IS attack our towns, I have no other choice but to fight alongside the NDF to defend myself, my family and my home,” he added, pointing out to a man standing near us, carrying a Kalashnikov rifle.

The swift deterioration of the situation in the west and north of Hama’s countryside, as anti-regime forces — including Jabhat al-Nusra — advance toward the Christian city of Mhardeh, which overlooks Al-Ghab Plain, as well as in the direction of Hama’s military airport.

Moreover, civilians have started fleeing Alawite villages that are located near battlefields such as the town of Arza near Hama’s military airport, which has been deserted.

A resident from an Alawite town in the western countryside of Hama told Al-Monitor, “The situation has become perilous as groups linked to Jabhat al-Nusra are approaching the region.”

“People are carrying arms at an increasingly rapid pace, while many families owning real estate in Tartous and Latakia have deserted their homes. The situation has become alarming in this region, especially since many residents expect Jabhat al-Nusra to commit massacres there, should it progress in the region. This will be in retaliation for the massacres the group accused the NDF of committing in Sunni towns — mainly in the towns of Tremseh and al-Lataminah in 2012,” he said.

A quick tour of the Alawite villages in the west of Hama’s countryside is sufficient to notice the extent of tension and alert among people, as dozens of checkpoints are deployed along the roads, while cars and pedestrians are being thoroughly searched.

In addition, many young men from these towns have been fighting alongside regime forces since the very beginning of the armed confrontations, and this region is seen as the area with most overlapping sects in Syria. It is also considered to be the main gate from the east to the Alawite-fortified areas in the mountains of the Syrian coast.

This is likely to prompt the Syrian regime to prepare for major military campaigns in the direction of the strategic areas of Halfaya and Morek in the northern countryside of Hama. It has been widely circulated among regime supporters here, probably citing army sources, that controlling these two areas would be sufficient to cut the supply routes for armed brigades in the rest of Hama.