How the Syrian regime forces are attacking opposition under Russian cover

It seems the Syrian regime forces are trying to undermine the opposition’s presence on the Syrian coast, as they attacked the Free Syrian Army’s strongholds under a Russian air cover. 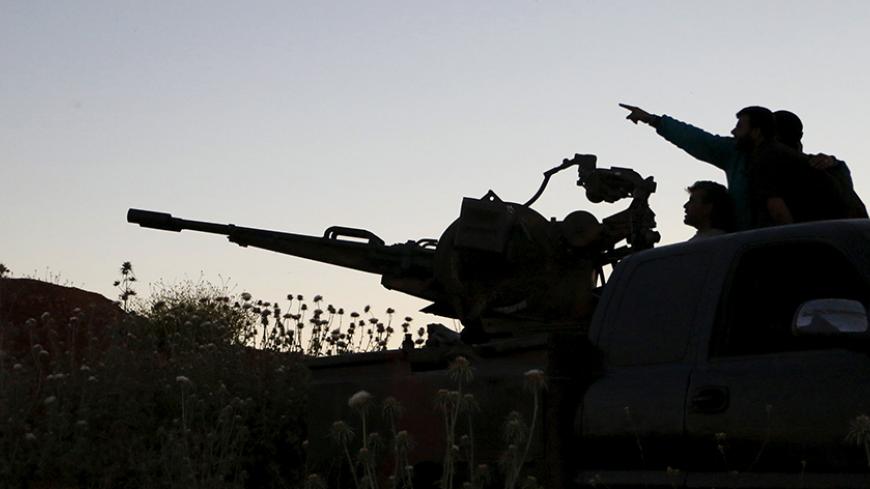 Tajammu Al-Ezza brigade fighters on an anti-aircraft weapon inspect the sky for helicopters loyal to Syrian President Bashar al-Assad in the Hama countryside, May 6, 2015. - REUTERS/Mohamad Bayoush

HAMA, Syria — The Syrian regime launched a broadscale attack against the opposition forces in the northern countryside of Hama and the countryside of Latakia, under an intense cover by the Russian air force and with the support of the Lebanese Hezbollah. The attack, which is the first Russian-backed move by the regime, included a long line and several axes and aimed to secure the stronghold of the regime on the Syrian coast and limit the influence of the opposition in its vicinity.

Operations started on Oct. 7, as the regime’s military convoys invaded the opposition sites adjacent to the Syrian coast, but the regime officially announced the battle the next day.

In this context, the Syrian army's chief of staff, Gen. Ali Abdullah Ayoub, said in a press statement to the Syrian news agency Sana on Oct. 8 that the Russian airstrikes — which began Sept. 30 — undermined the fighting abilities of the Islamic State (IS) and other terrorist organizations, announcing the formation of a fourth legion raid to initiate a broad attack on what he called terrorist assemblies.

The northern countryside of Hama is witnessing the heaviest fighting as the regime forces try to break the opposition forces’ defensive lines with dozens of tanks and armored vehicles under Russian air cover.

Al-Monitor toured the towns of Hama’s northern countryside Oct. 10. We noticed the presence of large numbers of opposition fighters, mainly affiliated with the Free Syrian Army (FSA), such as the Knights of Justice Brigade, 13th Division, the 101st Division and the Central Division, in addition to Ahrar al-Sham and other factions, along with massive reinforcements, which foretells the critical importance of this crucial battle.

FSA fighters use individual weapons and a car equipped with heavy machine guns as well as numerous TOW anti-tank missiles and a small number of tanks; while on the opposite side, the regime, assisted by Russian helicopters, comb the roads to allow its forces to launch their offensive under a heavy cover by Russian warplanes and rocket launchers.

Hezbollah is also present in this battle along with the regime forces, and perhaps the killing of its prominent leaders — Hussein Hassan Haj on Oct. 10 and Mehdi Hassan Obeid on Oct. 12 — proves the extent of Hezbollah's role in this battle. News sites close to Hezbollah confirmed that both were killed during the battles against the opposition in Idlib and Hama.

In this vein, Maj. Moussa al-Khaled, a military leader in the FSA’s 13th Division, told Al-Monitor, “The TOW missiles had a major role in this battle given the regime’s reliance on armored vehicles.”

On Oct. 9, the regime forces captured Bahsa village in al-Ghab plain, and on Oct. 10 they took hold of Atshan village in the northeastern countryside of Hama, 15 kilometers (9 miles) southeast of Murak, and the neighboring Um Haratain village.

These battles could be considered as battles of attack and retreat, and it does not seem that the Russian air support led the regime forces to achieve any significant progress. “The regime’s firing density and destructive power increased in parallel with a heavy reliance on the Russian air force,” Khaled said.

He added, “This, however, is insufficient to tip the balance of the battle. Today we are more in need of anti-aircraft and anti-tank missiles.”

The regime focused all its efforts and concentrated the support of its allies on fending off the opposition forces from its stronghold on the coast. On the other hand, Russia is promoting its intervention in Syria under the pretext of fighting IS while its airstrikes are concentrated to pave the way for the regime’s offensive on the opposition, particularly the FSA.