Although recent Russian military strikes in Syria have provided air cover for government forces, the Free Syrian Army continues its battles against the regime. 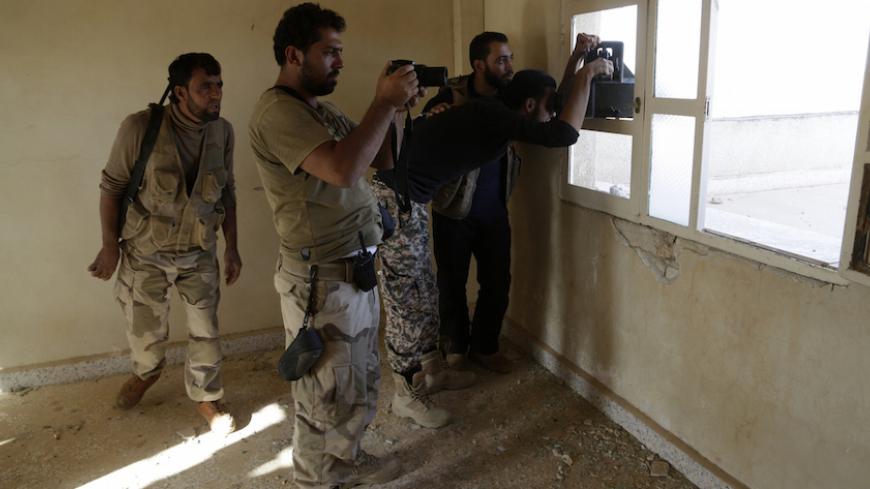 Free Syrian Army fighters of the 101 Division monitor the movements of the forces loyal to Syria's President Bashar al-Assad near al-Tamana town in the southern countryside of Idlib, Syria, Oct. 14, 2015. - REUTERS/Khalil Ashawi

IDLIB, Syria — The Syrian revolution broke out in March 2011 as Syrians demanded freedom and democracy from an authoritarian totalitarian regime. This regime, however, confronted peaceful demonstrations with live ammunition that led to the killing and wounding of several demonstrators back then. Several months later, the situation in Syria evolved, and the Free Syrian Army (FSA), which was formed in July of 2011, turned into the Syrian revolution’s military arm that confronts the Syrian regime’s military machine.

As the Syrian regime failed to put an end to the revolution, it subsequently resorted to its allies, namely Hezbollah and Russia, for military and political support, and it seems to have shifted from giving orders to receiving ones while serving Iran's and Russia’s interests. This impeded Damascus from making any decision to start or stop a battle before consulting its Iranian ally, as shown by the recent truce that was signed between the opposition and the regime in September; the negotiating team was Iranian, and there were no regime representatives facing the Islamist Ahrar al-Sham movement.

The Russian intervention that started in late September was a desperate attempt to defend the regime, which prompted the opposition FSA forces to announce full public mobilization aimed at confronting the Russian aggression, which they described as an occupation of Syrian territory, according to the FSA forces.

After it received Russian support, the regime braced itself for a major battle to try to regain the territory it had lost. It launched its first battle in the countryside of Hama — which had been under the opposition control — and it started a fierce ground campaign under Russian air cover on Oct. 7.

Surprisingly, however, the regime forces failed to advance and lost more than 27 armored vehicles in an attack dubbed the “Tank Massacre." The regime forces lost the battle and the FSA maintained its positions in Hama.

For this instance, a video published by pro-regime Russia Today news outlet on Oct. 12 depicts the battles led by the Syrian regime forces in some small villages in Hama’s countryside, which are, however, still under the opposition’s control.

However, despite all of that pressure, the FSA forces managed to preserve their regions and maintain their positions as they switched from offense to defense. While the regime machinery suffered significant destruction in all of the fighting areas, the term TOW missile was widely heard during the battles.

The key player in this battle was the FSA, and this proved its ability to confront ground forces backed by Russian air cover. The name of the US-made TOW anti-armor missiles was widely used in these battles, as some FSA moderate units employed these precise and effective missiles in repelling armored tracked vehicles and heavy machinery. TOW missiles can be controlled even after grenades have been launched.

According to military experts who spoke to Al-Monitor on condition of anonymity, these grenades are very likely to strike their target as they rely on the grenadier’s skills. The TOW missile requires calm nerves. They require grenadiers who can completely disconnect from the tense and heated atmosphere of battle. Fighters with such characteristics have a very good chance of hitting their target as the missile has a range of 3,800 meters (about 12,500 feet), while the grenade can be controlled through wires that connect the grenade to the base. The grenade’s direction can be shifted at a speed of 200 meters (around 656 feet) per second if the target moves or tries to hide.

Suhail al-Hamoud seems to be one of the most skilled TOW missile grenadiers in Syria, looking at the number of destroyed vehicles, and Al-Monitor met with him to further learn about this subject.

Hamoud defected from the Syrian army in 2012 and served as an assistant in anti-tank battalions a year into the outbreak of the revolution.

“I was trained in the Syrian army to use the Russian Malyutka and red-arrow anti-armor missiles, which are not so different from the TOW missiles but do not enjoy the same precision, so I gained experience in dealing with all anti-shield missiles both in terms of structure and trajectory and regardless of their points of strength or weakness,” he said.

Hamoud enjoys wide popularity among Syrian dissidents who either know him personally or from social networking sites. He has chosen the nickname of “Abu TOW” (Arabic for "father of TOW"), given his passion for the missiles.

“Our generation lived a peaceful life full of love and joy, but what is happening in our country has forced us to engage in battles and take up arms. Despite all the violence we live in, we are still human beings, and we have not changed. We are waiting for the war to end to throw away the arms and get back to our previous lives,” he said.

Speaking of what he achieved during the revolution years, Hamoud said, “I destroyed around 70 targets, of which 57 machineries were destroyed through TOW missiles and 11 machineries through the Malyutka missiles. These targets included planes [at Aleppo International Airport], tanks, armored vehicles and armored personnel carriers in addition to DShK machine guns.”

Hamoud, however, said that reports of an increase in the supply of missiles are wrong. He added that the use of these missiles has increased as a result of the growing need for them in the battles. Hamoud also attributed this to the increased media coverage of the Syrian developments following Russia’s intervention in support of the regime.