Hama, a hotbed of opposition against the Syrian regime, has learned from its experience in the 1980s and stayed out of the armed rebellion, so far sparing the city the destruction witnessed elsewhere. 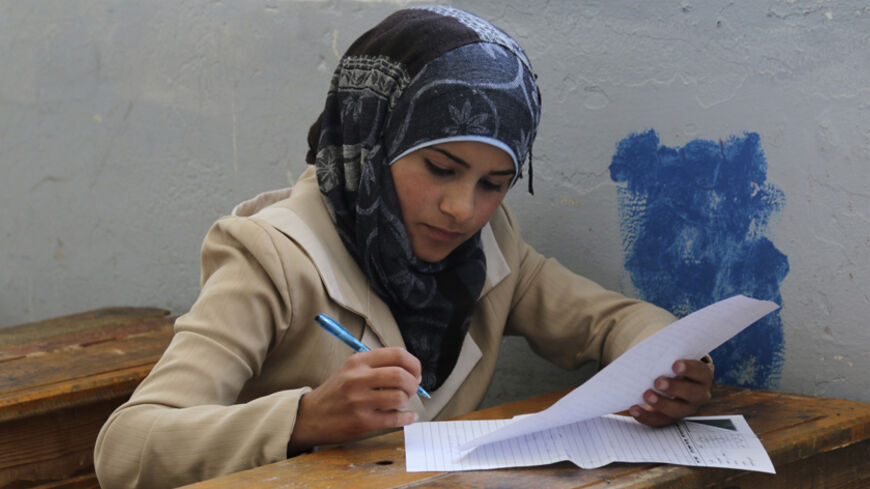 A student sits for her exam in what activists say is the only school in Hama not controlled by the Syrian regime, in an area controlled by the Free Syrian Army in the Hama countryside, May 10, 2014. - REUTERS/Ahmad Rif
Khaled Atallah
October 1, 2014

HAMA, Syria — Residents of the city of Hama, 49 kilometers (30 miles) north of Homs, call it “the city of the massacre,” but it is still far from the battles continuing in the surrounding countryside. Since the Syrian army stormed the city in early August 2011, relative calm has prevailed in the city that witnessed some of the largest peaceful protests against the Syrian regime.

The Syrian army is heavily deployed on the outskirts of the city while cars line up at the main checkpoint at the entrance to the city. Photos of President Bashar al-Assad are widespread near Syrian army and intelligence checkpoints. The purpose of the random distribution of these photos is clear. The first signs of Hama’s opposition to the Syrian regime was the removal of a statue of former President Hafez al-Assad from between the wings of the stone eagle monument in the main square of the city.

With the sound of each shell launched from the city's military airport toward the countryside, faces of residents show clear expressions of anxiety and fear of the future. Only the sounds of the ancient Norias of Hama bring to mind a peace that the city has been lacking for so long.

The storming of the city by the Syrian army and the emergence of armed rebels in the countryside suppressed the local opposition, according to Sami al-Sayed, 23, who was active in the protests. “The majority of Hama residents oppose the regime and this is well known. Today we are fighting the regime with our will and desire for life,” he told Al-Monitor.

At the start of the revolution, hundreds of thousands of protesters gathered in Hama’s Assi Square following the withdrawal of security forces from the city, which, in early June 2011, killed dozens of protesters. However, the security forces returned and the Syrian army imposed a siege and stormed the city just a month later.

According to Michel, 34, a member of a Christian family well-known for its opposition to the Assad regime, Hama has not been dragged to the military front lines thanks to the awareness of most of its residents. “Hama residents learned from their experience in the 1980s. They have come to know the consequences of the use of weapons in the political struggle. They also learned from the experience of other Syrian regions suffering from the current crisis,” he told Al-Monitor.

Hama has a strategic location in central Syria: It links the north to the south. The city is also significant symbolically for being a massive Sunni bloc in central Syria.

Political analyst Ahmed al-Khaled, a regime sympathizer, believes the regime and the residents agreed to distance the city from the military conflict in the country. “The regime offered some concessions to the residents in terms of services and local administration in exchange for a tacit agreement to distance the city from the battles. Hama is teeming with displaced Syrians, which convinced some opposition groups that it would be disastrous to enter the city,” Khaled told Al-Monitor.

Soumar Ali (a pseudonym), a member of the pro-regime National Defense Forces, told Al-Monitor, “The city’s residents are peaceful; we know they are opposed to the regime and they may hate us, but they did not use their arms against us. The city is a big opposition bloc and certainly, if residents are given the chance, they will fill the squares as they did before. We are trying to win them over to our side since we are in daily contact with them. However, the fact that authorities allowed some foreign fighters from among those who participated in the battles of the countryside to come to the city foretells the failure of all our efforts.”

In 2012-13, security incidents occurred in the city, but were limited to small attacks by a few armed youths against army and intelligence checkpoints, following which the Syrian army would raid some neighborhoods. However, the situation started to improve gradually at the beginning of 2014, according to residents interviewed by Al-Monitor.

Siham Kabjeh, a dentist, confirmed that in early 2014, officers at military checkpoints became gentler and most of them tried to gain the friendship of the residents. They allowed the city to resume its activity at night, especially during holidays and the holy month of Ramadan. However, the increasing numbers of displaced people put pressure on services as well as contributed to the increase in the prices of commodities and real estate.

The population of the city in 2009 was only 850,000, but today there are an additional 1.2 million displaced Syrians in Hama, in addition to the internal displacement in the city after the demolition of three neighborhoods, which displaced more than 4,000 families within the city.

“The city suffers from a humanitarian crisis,” said relief activist Mohammed Saeed. “We are working hard to secure the needs of the displaced in collaboration with the Red Crescent and local organizations, and we are doing well. However, the numbers of displaced people, which is increasing day by day, weighs heavy on our shoulders and threatens to lead to a humanitarian crisis.”

In late 2012, armed opposition factions tried to advance toward the city and were able to control a large number of villages in the countryside, but this advance was thwarted by the huge reinforcements of the regime around the city.

Al-Monitor met with retired Brig. Gen. Abdul Rahim Salloum, who believes the opposition’s attempts to control the city fall within its desire to expand its control from Aleppo to Idlib. “Opposition control of the city would enable it to cut most of the Syrian army supply routes to the north and to have a new entrance to coastal villages and the Ghab plain, which it believes are the major strongholds of the regime. However, if this happens, the city will certainly relive its experience in the 1980s, especially in light of the increase of the number of its inhabitants, due to the influx of displaced people.”

According to Salloum, the regime is intent on maintaining its control over the city, given its demographic nature, and to protect the villages of the Ghab plain, which are pro-regime.

Today, the battles have reached a new peak between the Islamic State and the Syrian army in the countryside east of the city, and between the army and Jabhat al-Nusra in the north and west. The city's residents are walking through a minefield that may explode at any time and put the whole city in flames. This is what residents have been dreading since the onset of the uprising, but so far they have managed to skirt the disasters of the Syrian war.