The Turkish-built Palace of Justice and an even larger prison were inaugurated in al-Rai last month with the expectation of a new judicial system to begin functioning in mid-October in place of unsanctioned courts controlled by the Free Syrian Army. 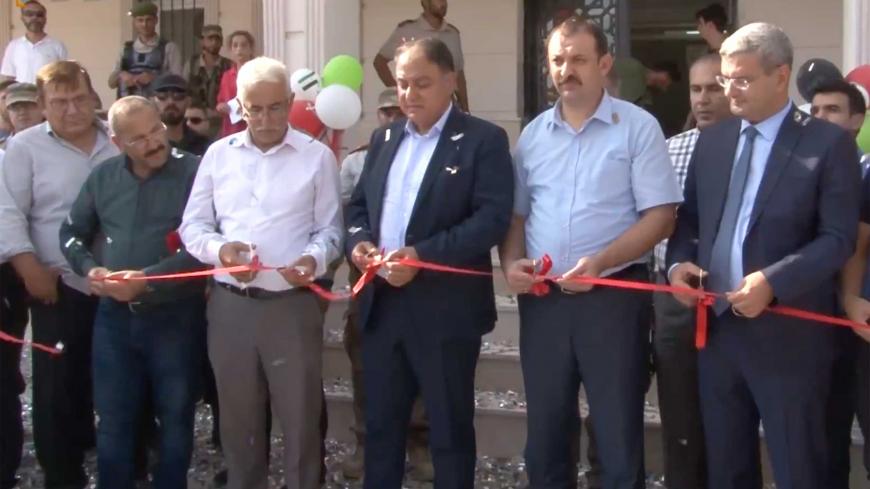 Mehmet Tekinarslan (C), governor of Kilis, Turkey, cuts a ribbon at the opening ceremony of the Palace of Justice in al-Rai, Syria, in a still from a video recorded Sept. 19, 2018. - YouTube/FHA

ALEPPO — On Sept. 19, the local council of the city of al-Rai, in the northern Aleppo countryside, controlled by Turkish-backed Free Syrian Army (FSA) forces, inaugurated the new building to house the Palace of Justice. Turkey fully funded the construction of the court building and the adjacent prison.

Alaa Mohammed, a public relations officer for al-Rai’s local council, told Al-Monitor, “The Palace of Justice is the first of its kind in FSA-controlled areas in northern Syria. It will serve as the central court and the point of reference for all courts in the Euphrates Shield area, Afrin and Aleppo’s countryside. It will include criminal courts and courts of appeals and cassation, all of which will start formally operating by mid-October.”

The Euphrates Shield area refers to the northern and northeastern countryside of Aleppo now under the control of Turkish-backed FSA militias that allied with Turkey's military during Operation Euphrates Shield, conducted from August 2016 until March 2017.

During the Syrian civil war, the court system run by the government in Damascus ceased to operate in opposition-controlled areas. After the FSA took Aleppo in mid-2012, various unsanctioned courts began to emerge, operating independently of any official authority. Controlled by the FSA, they issued questionable and unfair verdicts, based on Islamic law. The new Palace of Justice aims to regulate the work of all the courts in FSA-controlled areas in the north.

Mohammed remarked, “The Palace of Justice is very important for the judiciary to take its place in FSA-held areas, which all lawyers, judges and human rights activists in the area have been calling for. There are many cases that have been pending for years now and require competent courts to be resolved.”

He further explained, “Since al-Rai is located in the center of the Euphrates Shield area, the Palace of Justice was built there. It is a two-storey building of 1,000 square meters. A 1,500 square meter prison was built nearby, fit to accommodate around 400 inmates. It [the prison] consists of two sections, one for each gender. The total land area where the Palace of Justice is located along with the prison is 8,000 square meters. The project is fully supported by the Turkish government financially, including the salaries of the staff and judges. The police and general security forces in al-Rai are responsible for protecting the premises.”

The Turkish government will directly supervise the selection of Syrian judges and operations at the Palace of Justice.

FSA-held areas generally lack an impartial judiciary, as the FSA factions control most courts. There are no competent courts to mete out justice in the cases brought. The Turkish government is trying to organize the judiciary as part of its efforts to entrench stability in Aleppo’s countryside through projects in various service sectors and local councils.

Marwan Ibrahim Kaid, who served as a judge for the now-defunct Unified Judicial Council in FSA-held areas of Aleppo, told Al-Monitor, “Establishing a Palace of Justice is not enough for the judiciary in Aleppo’s countryside to be successful. The judiciary must have complete independence, and the FSA factions should have no influence over courts. If independence of the judiciary is achieved, we would have a pilot experience and this would be reflected positively among all the security and service sectors in FSA-controlled areas as well as their residents.”

Hussein Hammadeh, who also worked as a judge in courts established by the FSA, told Al-Monitor, “The absence of a justice system in FSA-held areas over the past years has had a negative impact on the Syrian revolution, as it contributed to the spread of chaos through unfair rulings. Even more so, political projects have been prioritized at the expense of the judicial one. This has further torn apart the objectives of the revolution. The judicial institution is based on an organized structure and laws in line with the objectives and principles of the revolution.”

Hammadeh added, “Trials must be conducted in a public manner, and the defendants should be granted the right to defend themselves. No party should be allowed to interfere in judicial institutions. These standards have unfortunately been lacking in past years in the courts of FSA-controlled areas.”

“Establishing the Palace of Justice in FSA-held areas in an orderly manner will contribute to stability, which is our only wish for the future,” Hammadeh concluded.

Hussein added, “Syrian law will be adopted under the Constitution of 1950, after removing all the articles that violate the provisions of Islamic law or the principles and objectives of the Syrian revolution, along with the articles restricting public freedoms that the Syrian regime later on included.”

He noted that in FSA-controlled areas in northern Syria, the process of removing those articles began in January 2018.