Turkey is shoring up the FSA's — and perhaps Ankara's — clout in Syria by providing newly schooled policemen to Aleppo province. 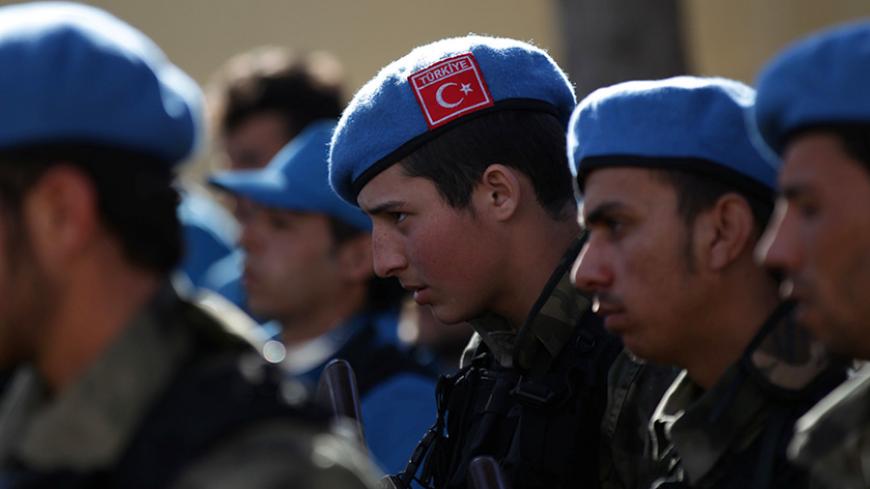 A member of the Free Syrian Police, wearing a Turkish flag on his hat, attends a ceremony celebrating the inauguration of the group in the town of Jarablus, Syria, Jan. 24, 2017. - REUTERS/Khalil Ashawi

ALEPPO, Syria — Turkey has been training a police organization, the Free Syrian Police (FSP), to help out with secondary operations in Aleppo province so the Free Syrian Army (FSA) can focus on fighting and maintaining control of the areas it has captured.

“We are working on taking over all of the FSA military checkpoints at the city and town entrances, conducting regular patrols, promoting the role of the traffic police, managing the traffic and establishing an immediate-action rapid-deployment" team, FSP Lt. Col. Wael Fouad told Al-Monitor recently. His unit began operating this month in Azaz, in northern Aleppo near the Syria-Turkey border, after it completed 23 days of intensive training in Mersin, Turkey.

"Most of the courses were centered on policing, organized crimes, arrests, armed attacks and countering terrorism," Fouad said.

Fouad's 1,300-member unit is also covering the border town of al-Rai and other cities in the area such as Mare', Suran and Akhtarin. An additional FSP force of 450 members began operating in January in the Jarablus area of northeastern Aleppo province near the Turkish border.

The FSP was established specifically to be deployed in parts of Aleppo held by armed factions opposing Syrian President Bashar al-Assad's regime. These forces, including the FSA, fight under Turkey's Operation Euphrates Shield.

On March 10, the FSP protected protesters demanding that the FSA retake control of villages and towns held by the US-supported Syrian Democratic Forces coalition of militias since early 2016 in northern Aleppo. They also called on the various armed factions to unify their ranks and remove the FSA military positions scattered in Azaz residential neighborhoods. The FSA's presence there makes residents targets for the Islamic State (IS).

Fouad stressed that the FSP will not supplant the FSA. Rather, the FSP's mission is to assist the FSA, lighten its burden and take over security duties in a way that allows the FSA to concentrate fully on the fighting — should Operation Euphrates Shield continue — on the battlefields outside the cities and towns. “Many armed factions, including Jabhat al-Shamiyah, started evacuating military headquarters in Azaz, which will improve the FSP's chances to succeed and take over the policing dossier.”

The two FSP forces are not enough, Fouad said. He said, “After the FSA factions managed to liberate al-Bab from IS, the need for additional police members grew bigger. A third FSP batch arrived in Turkey in early March for training, which will probably be over in late March, and [the police] will be deployed in al-Bab and its suburbs." More than 5,000 policemen could be needed, he added.

Notably, the first FSP group, stationed in Jarablus, was recruited in late 2016 from Syrian refugee camps scattered in Gaziantep and Kilis in southern Turkey, unlike the second group stationed in Azaz and nearby towns, which mostly came from Aleppo province. There has been no shortage of recruits.

Policeman Mohamed Kousa, who was trained in February and sent to Mare’, told Al-Monitor, “The FSP recruitment call provided the youth in the Aleppo countryside with jobs. Many of the FSA former fighters who were looking for more stable income sources found it irresistible to work within the ranks of the national police force, since the [offensive] battles under Operation Euphrates Shield halted after al-Bab was seized.”

He added, “A policeman is paid up to 600 Turkish pounds, nearly $200, which is enough to meet the needs of a five-member family" in the FSA-held Aleppo countryside.

Deploying a Turkish-trained police force in the FSA-held areas could deepen Turkey's influence in parts of Aleppo province. Media activist Firas Mawla told Al-Monitor the FSP is under the direct supervision of Turkish officers, "yet skilled and competent Syrian officers are working with them side by side to bring about security and reduce the influence of the FSA factions that will be completely leaving the cities in the upcoming period."

Mawla added, "Also, there are Turkish plans to restructure the judiciary by forming various courts. In fact, security goes hand in hand with the judiciary, and Turkey must take control over both as long as it is willing to extend influence. I believe that this will have a positive impact on the previously chaotic region.”