The Turkish government is working with local councils in Syria's Euphrates Shield area to build and improve a road network to connect the area's cities with southern Turkey. 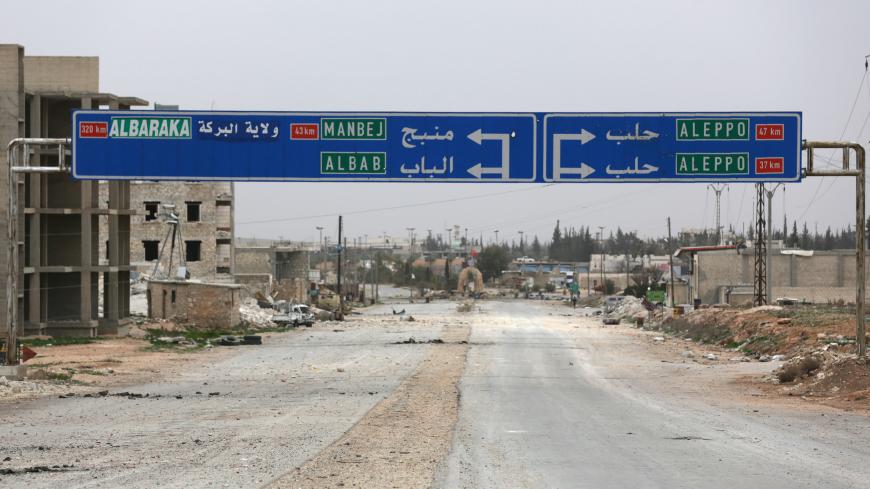 A road sign that shows the direction to Manbij is seen in the northern Syrian town of al-Bab, Syria, March 1, 2017. - REUTERS/Khalil Ashawi

ALEPPO, Syria — In cooperation with the local councils of the Euphrates Shield area in Aleppo, the Turkish government is seeking to establish a road network to connect the main cities of the area and link them with the southern Turkish provinces of Gaziantep and Kilis, which are home to hundreds of thousands of Syrian refugees.

Alaa Hamad, the director of the information office at al-Rai border crossing, told Al-Monitor, “The construction of the freeway to the east of al-Rai city was completed July 27. The freeway, whose construction required around three months, extends from al-Rai crossing on the border with Turkey to al-Bab road and stretches over 6 kilometers [3.7 miles]. It is a two-lane freeway established with the support of the Turkish government.”

The local council in the city of al-Rai had previously received support from the Turkish government to pave and repair the roads linking the city with the surrounding villages and towns. According to officials from the local councils of the Euphrates Shield area, Turkish companies are to build new freeways to link al-Rai and its border crossing with other cities in the Euphrates Shield area such as al-Bab, Azaz and Jarablus.

In mid-June, the local council of the city of Azaz established a road linking the eastern side of the city to the Bab al-Salameh border crossing with the support of the Turkish government. The two-lane freeway extends about 5 kilometers (3 miles) and has freed drivers from needing to travel through the center of Azaz, where traffic congestion is most intense.

Omar said that Turkish construction companies have the equipment needed for highway building that is not available to the local councils. The local councils will handle repair of the roads within the cities, mostly with equipment provided by the Turkish government and asphalt and other supplies brought from Turkey.

The modern and fast road network will provide easy access to raw materials and attract Turkish investments to the Euphrates Shield area, linking the economy of the area with that of the southern provinces of Turkey.

“There is also a plan to build a 20-kilometer [12.4-mile] freeway between the city of Azaz and the city of Mareh in the northern countryside of Aleppo. I believe that such methods will grease the economic wheels of Azaz in particular and facilitate the movement of passengers,” Omar added.

He explained that the main cities in the Euphrates Shield area — Azaz, al-Bab, Mareh, Jarablus, al-Rai and Akhtarin — are poorly connected by badly pitted roads. They have not been repaired or paved since the outbreak of the Syrian revolution in 2011.

With the support of the Turkish government, the local council in the city of Jarablus in the northeastern Aleppo countryside repaired and paved the roads in the city and its outskirts in June. The maintenance works included roads to the west of the city, between al-Hajaliah and Jarablus, and several others linking the city to nearby towns and villages.

Ali Rajab, the director of the services office at the local council of the city of al-Bab, told Al-Monitor, “Improving the roads of the Euphrates Shield area and establishing a new road network interconnecting major cities would play a great economic, social and urban role in the area. Also, such plans can achieve growth and prosperity and leave an impact on all other sectors.”

Rajab explained, “The road network in the Euphrates Shield area will feature two-lane freeways interconnecting the cities of al-Bab, Jarablus, Azaz, al-Rai, Mareh and Akhtarin. This network will also connect these cities with al-Rai crossing, the Bab al-Salameh crossing and the Jarablus crossing on the border with Turkey."

He added, "While the Turkish government will undertake the construction of this network of roads in the coming period, it has yet to schedule the works.”